There comes a moment in every manga reader’s journey when they’re no longer dazzled by the sheer variety of genres, styles, or outrageous storylines that an issue of Weekly Shonen Jump or Big Comic Spirits offers—the moment when a manga about killer goldfish or a warrior with lethal nose hair sounds more exhausting than awesome. I reached that milestone around the time I read The Qwaser of Stigmata, a manga so lewdly preposterous I felt uncomfortable even summarizing the plot in my review. So when I heard about Chainsaw Man, a series whose premise is pretty much summed up in the title, I was pretty sure I wasn’t interested in reading it. Then I saw this image: 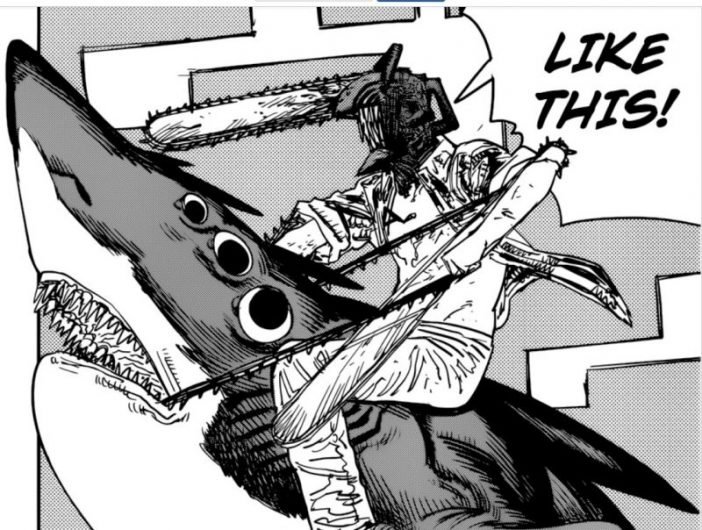 My first thought was whoa. And then: cool. And so began my Chainsaw Man read-a-thon, an attempt to understand the appeal of this blood-and-testosterone-soaked battle manga.

The character atop the shark is Denji, who begins the story as an ordinary young man struggling to pay off his father’s gambling debts. His only friend is the sweet-faced Pochita, a dog demon with a chainsaw blade where his snout should be. After local mobsters brutally attack Denji, Pochita transfers his demonic powers to Denji, thus enabling Denji to transform from scrawny teen to chainsaw-wielding menace with the pull of a cord. His remarkable abilities attract the interest of Makima, a professional Devil Hunter who recognizes Denji’s potential value as a weapon. Through a mixture of flirtation, cajoling, and threats, Makima recruits Denji for the Public Safety Council, dispatching him to kill monsters.

Going into Chainsaw Man, I was fully prepared for carnage and mayhem and three-eyed sharks. What I didn’t expect were moments of genuine pathos. The interactions between Denji and Pochita, however, are sniffle-inducing, underscoring the poignancy of Pochita’s decision to sacrifice himself for Denji. Later chapters set up an interesting parallel between Denji’s relationship with Pochita and his relationship with Makima, who refers to him as her “dog.” When Denji chafes against the conditions Makima has imposed on their partnership, it spurs a moment of self-reflection about his own treatment of Pochita, making him realize just how much he took Pochita’s companionship for granted.

Of course, no one is reading Chainsaw Man for these kind of emotional beats; they’re hoping for outrageous displays of gore and violence, and on that front, Tatsuki Fujimoto does his utmost to push the boundaries of good taste. Every time Denji reverts to his demonic form, chainsaw blades burst through his chest and head with great clouds of arterial spray, a preview of the even bloodier manner in which he kills his enemies. Though some of the demons are uninspired—how’s a giant bat grab you?—Fujimoto’s most memorable creations are clearly designed to elicit an appreciative “ewww”; the first monster Denji kills, for example, is an enormous tomato devil who looks like something that’s been moldering in the crisper drawer for weeks.

Between the action scenes, Fujimoto peppers the script with crude jokes to remind us that Denji is a teenage boy whose primary motivation for fighting demons is to impress Makima and earn enough money to eat junk food. In that respect, Denji is a more honest shonen hero than the typical Jump lead; he thinks and acts like a real teenage boy, right down to his self-absorption and total objectification of women. (There’s even a chapter called “A Way to Touch Some Boobs.” Yes, really.) I can’t say I ever warmed to Denji as a lead character, but I finished my read-a-thon with a grudging respect for Fujimoto’s excessive, ridiculous creation, which entertained and repelled me in equal measure. Your mileage will vary.

Chapters 1-53 of Chainsaw Man are available at the VIZ website.