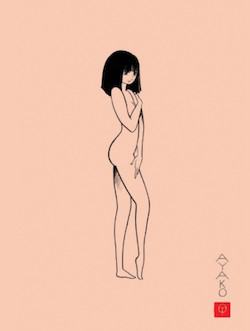 Ayako is an odd beast. Structurally, it resembles a Russian realist novel, using a once-powerful family of landowners to embody the political and economic upheaval caused by America’s seven-year occupation of Japan (1945-52). Temperamentally, however, Ayako feels more like a John Frankenheimer movie, with subplots involving a Communist organizer, an assassin who stashes orders in his empty eye socket, and a witness whose family condemns her to lifelong imprisonment in an underground cell. Though Tezuka makes a game effort to reconcile his literary and cinematic influences, the results are uneven: Ayako is powerful, disturbing, and, at times, flat-out ludicrous, yet it lacks the winking self-awareness of MW or the profound humanism of Ode to Kirihito, instead offering an engrossing but not entirely persuasive portrait of a family torn apart by the emergence of a new social order in post-war Japan.

Ayako revolves around the Tenge clan. The patriarch, Sakuemon, is a glutton and a bully, indulging his voracious appetites for food and sex while aggressively policing his family’s behavior. His sons aren’t much better: Ichiro, the eldest, is a manipulative coward who barters his wife for Sakuemon’s loyalty; Jiro, the middle son, is a disgraced war veteran who’s been coerced into spying for the US military; and Shiro, the youngest, is a fierce truth-teller who is slowly corrupted by his family’s secrets.

Two events threaten the Tenge’s equilibrium. The first — a murder — condemns the youngest family member to a dungeon, lest Ayako reveal a key piece of evidence linking a clan member to a murdered political dissident. Though the Tenge women are appalled by the plan, they’re powerless to help; the rest of the family views Ayako as a threat, as she’s both Sakuemon’s daughter and Ichiro, Jiro, and Shiro’s half-sister. The second — a decree from the government — forces the Tenge clan to redistribute their land among tenant farmers. Despite Ichiro’s vigorous protests, the government arrives on the property, intent on razing the structure that has kept Ayako out of public view for more than a decade.

Though the characters’ behavior is more extreme than anything found in Tolstoy or Sholokhov — unless I missed the incest in The Don Flows Home to the Sea — the spirit of Russian realism informs Ayako. Tezuka had already been to the Russian realist well before, loosely adapting Fyodor Dostoevsky’s Crime and Punishment in 1953. He wasn’t alone in taking inspiration from Russian literature; other Japanese artists — most notably Akira Kurosawa — adapted Dostoevsky and Maxim Gorky’s work, too, transplanting the settings from Russia to Japan. (Kurosawa’s Red Beard, borrows liberally from Dosteoveksy’s 1861 novel Humiliated and Insulted; The Idiot and The Lower Depths follow the original source material more faithfully.) It’s not hard to imagine what made these Russian authors so attractive to Japanese artists of the 1950s, 1960s, and 1970s: the realists’ work was both grand and intimate, using sympathetic characters to dramatize the toll — physical, economic, and psychological — of social unrest and change.

Of course, the realist approach has a potential pitfall: characters can feel contrived, lacking an identity outside the cause they represent. Ichiro and Jiro, the eldest brothers in Ayako, both have obvious symbolic intent: Ichiro represents the last vestiges of feudal Japan, a landlord in danger of losing his fields, his farmers, and his source of power, while Jiro embodies the complicated relationship between the Japanese and their American overlords, caught between the Japanese desire to restore normalcy and the American desire to refashion Japanese society in its own image. For all their symbolic baggage, Ichiro and Jiro still register as fundamentally human: they’re flawed, inconsistent, and corrupted by what little power they have, yet both are strongly driven to pursue what they believe to be in their best interests.

Ayako, however, is more a receptacle for other characters’ anger and lust than a true individual. She’s an innocent victim who endures over a decade of isolation, emotional neglect, and sexual abuse at Shiro’s hands, emerging from her ordeal with no real beliefs or desires of her own. Her lack of individuality makes her the most transparently symbolic member of the Tenge clan; it’s not much of a stretch to interpret her character as a representation of occupied Japan. That symbolism is underscored by one of the book’s most arresting sequences. In it, we see Ayako writhe and shed her skin like a molting insect, casting aside her girl’s body for a woman’s. The images are stark: Ayako is rendered in white lines on a jet-black background, and her ecstatic expression suggests an erotic awakening — a metaphorical re-enactment of lost innocence during a period of confinement and darkness.

The symbolic intent of Tezuka’s characters is more apparent in Ayako than in some of Tezuka’s other mature works, I think, because Ayako is more  self-consciously literary than MW or Ode to Kirihito. The absence of humor or cartoonishly evil characters — two staples of MW and Kirihito — cuts both ways. On the one hand, Ayako is sobering and adult; we can appreciate the gravity of the characters’ actions because Tezuka doesn’t punctuate serious moments with low comedy; there’s no reprieve from our discomfort with the characters’ behavior, no mustache-twirling villains on whom to pin our disgust. On the other hand, Tezuka has a natural instinct for blending high and low, using pulp genres as vehicles for exploring big questions about human nature. The heightened reality of the stories is fundamental to their success; Tezuka uses his character’s extreme behavior and dramatic physical transformations to tear away masks, to lay bare real hypocrisy, selfishness, and cowardice. That pulpy spirit asserts itself from time to time in Ayako (see “spy who stashes orders in his eye socket,” above), but there isn’t quite enough of it; the thriller elements feel tacked on, rather than fundamental to elucidating Tezuka’s central themes.

Yet Ayako is compelling, in spite of its flaws. It’s a fierce, angry work, at once intensely critical of American efforts to re-engineer Japanese society, and intensely critical of the old Japanese social order, portraying the Tenges as feudal overlords out of step with the modern world. It isn’t Tezuka’s best work, but it’s one of his most ambitious, a sincere and emotionally wrenching attempt to show the lingering effects of World War II on the Japanese psyche. Recommended.