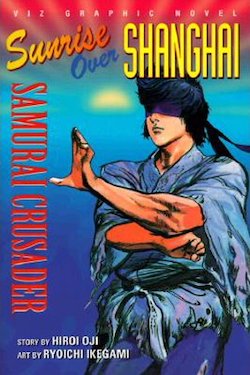 Whenever I see Ryoichi Ikegami’s name attached to a project, I know two things: first, that the manga will be beautifully illustrated, and second, that the plot will be completely nuts. Samurai Crusader, a globe-trotting, name-dropping adventure from the early 1990s, provides an instructive example. The story revolves around a young martial artist who teams up with struggling novelist Ernest Hemingway — yes, that Ernest Hemingway — to prevent an unscrupulous Japanese general from invading Shanghai with Nazi assistance. And if the thought of Hemingway as a butt-kicking action hero isn’t crazy enough, Ikeda and writer Hiroi Oji populate the story with such colorful bit players as a sadistic female military general, a bare-breasted priestess, an axe-wielding Aryan warrior, a demon whisperer, and a ninja with razor-sharp teeth. Ikeda and Oji don’t skimp on the cameos, either; Pablo Picasso, Joseph Goebbels, and Hermann Goering all have brief but memorable walk-on roles, as do Hitler and Emperor Akihito.

This motley assortment of characters are all chasing Kusanagi, a Japanese sword so expertly crafted that it can sever a canon in two. But Kusanagi isn’t just an elegant weapon; it’s a mystical object, capable of bestowing great power on its owner. The Nazis and the Japanese military alike believe that Kusanagi is the key to world domination, and double-cross each other in hopes of stealing it from the Oritsuin clan, a noble Japanese family. Kumomaru, the youngest member of the Oritsuins, is determined to stop both parties from abusing Kusanagi’s power, racing from Paris to Shanghai in a valiant effort to foil Japanese imperial ambitions in China. Along the way Kumomaru befriends Hemingway, beds a sexy French cat burglar, and falls in with a gang of Chinese warriors who disguise themselves as cooks. (As a sign of just how badass these cook-warriors are, each high-ranking solider in the organization has a dragon tattoo… on his tongue.)

As awesomely silly as the plot may be, the real attraction of Samurai Crusader is the art. The period settings provide Ikegami a swell excuse to draw zeppelins and biplanes, Nazi uniforms and samurai formal wear, French ballrooms and Chinese dives. No detail goes overlooked; even the most inconsequential characters’ clothing is meticulously rendered, and the street lamps in every city are drawn with such care as to distinguish a Parisian boulevard from a Shanghai corner.

The character designs, too, are arresting in their specificity; Ikegami’s great strength as an artist is his ability to convey character through odd facial features and posture, whether he’s drawing a crooked industrialist or a street urchin. Though his lead characters are impossibly attractive, Ikegami’s best creation, by far, is Juzo, a stealthy martial artist with the most distinctive set of choppers since James Bond crossed paths with Jaws. Juzo’s shark-like teeth, wild hair, and demonic squint make him an excellent foil for the handsome Kumomaru; Juzo moves with the lethal precision of a cobra, twisting his body into extraordinary positions to better deploy his arsenal of knives, wires, words, and pistols. Oh, and those teeth? They make swell weapons, too.

The only downside to Samurai Crusader is the dialogue. Though the story unfurls at a furious pace, the story grinds to a halt whenever Kumomaru crosses paths with his arch-nemesis, the deluded General Kamishima. Their all-caps exchanges feel more like policy discussions than real arguments, despite Ikegami’s best efforts to stage the scenes as dramatically as possible. Sweat drops bead, veins pulse and pop, but Ikegami can’t disguise the fact that these speeches are kind of a drag. (Sample: “Independence for all of Asia should be the way of Japan! We need national self-determination!”) What redeems these windy passages are the shoot-outs, tank fights, and sword play that proceed and follow them; aside from John Woo and Andrew Lau, few people can make bloodletting look as elegant as Ikegami does.

Perhaps the best way to summarize Samurai Crusader‘s appeal is to say that it has all the virtues of Crying Freeman and Wounded Man — crazy action scenes, sexy leads, mustache-twirling villains — without the copious nudity and sexual violence that can give even the most committed manga fan pause. Readers interested in tracking down copies should note that all three volumes of Samurai Crusader are out of print, though reasonably priced copies are readily available on Amazon and eBay. Highly recommended.

19 thoughts on “The Best Manga You’re Not Reading: Samurai Crusader”