“Whimsical tales of anthropomorphic beasts in love”—or so the dust jacket of The Wize Wize Beasts of the Wizarding Wizdoms promises. The eight stories in this collection do feature a race of half-animal, half-human creatures who behave like boys at a British boarding school, forming intense friendships that sometimes cross the line into romance. I’m a little reluctant to call these stories “whimsical,” however, as that word implies a certain degree of playfulness that was lacking in most of the stories, some of which were intensely sincere, and some of which raised legitimate questions about boundaries and consent.

Wize Wize Beasts unfolds at a special academy “dedicated to the study of wizardry,” where demi-humans of every imaginable type peacefully co-exist as they learn the arts of potion-making, spell-casting, and alchemy. Each story centers on a pair of opposites: prey and predator, teacher and student, mammal and reptile, smart and average. Most of their relationships fall under the general heading of “unrequited love,” in which one demi-human pines for his opposite, but can’t muster the courage to say how he feels.

In the most enjoyable chapters—”Marley & Collette,” “Cromwell & Benjamin”—Nagabe explores the healthier side of attraction, showing how strong feelings of admiration and concern can bring out the best in friends, allowing for moments of tenderness, warmth, and emotional honesty even when the friendship remains platonic. My favorite, “Mauchly & Charles,” read like an irresistible mash-up of Winnie the Pooh and The Girl from the Other Side, focusing on a bear (Mauchly) and the human he rescued (Charles) from a dark, rainy forest. After Charles returns to his own world, he and Mauchly hold an annual reunion, using this ritual as an opportunity to reflect on what’s changed in the ensuing year. The emotional vulnerability and candor of their interactions is genuinely astonishing—not because men don’t have close friendships, but because the kind of physical intimacy and gentleness that defines Mauchly and Charles’ friendship is seldom depicted in popular culture.

The weakest stories in the collection, by contrast, often conflate possessive or coercive behavior with romantic attraction, justifying one character’s actions by suggesting his feelings were so intense that they compelled him to transgress social norms. In “Doug & Huey,” for example, a crow (Doug) carries a torch for his handsome friend Huey, who—natch—is a peacock. Though Huey spends most of his time chasing girls, Doug’s devotion to him is unwavering—so much so, in fact, that Doug sabotages Huey’s efforts to land a girlfriend so that Huey will “never be closer to someone else.” Huey, for his part, is so deeply narcissistic that he doesn’t recognize Doug’s controlling behavior, creating a deeply toxic bond between them that is presented as a simple case of unrequited love.

The issue of consent lingers over other chapters in Wize Wize Beasts as well. “Alan & Eddington,” for example, depicts the friendship between a brilliant Siamese (Alan) and a hardworking rabbit (Eddie) who’s dazzled by his classmate’s effortless mastery of complex subjects. Afraid that Alan will reject his advances, Eddie concocts and serves him a love potion. While under the influence of Alan’s spell, Eddie compels Alan to kiss him and profess his love for him—a scene that’s meant to be a little naughty, I think, but instead registers as squicky. Alan confronts Eddie about the incident, but then invites Eddie to “start over” without a magical aide, undercutting the power of his previous speech about Alan’s “cowardly” behavior. 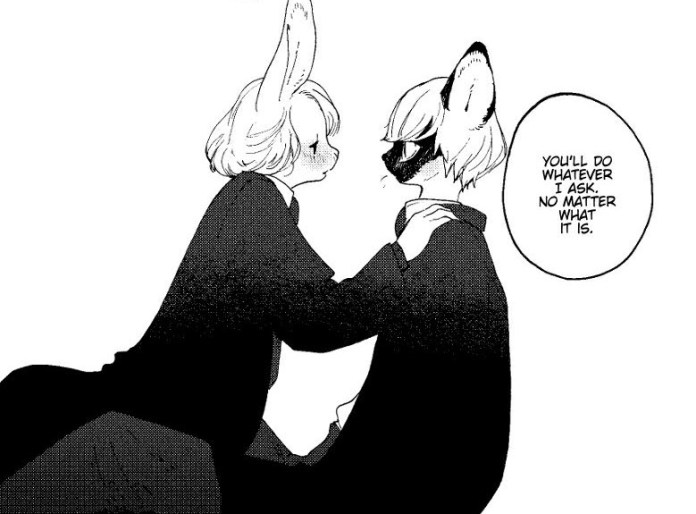 If I was sometimes ambivalent about the content, I found Nagabe’s crisp illustrations thoroughly enchanting. His anthropomorphic character designs capture the essential animal natures of each character while retaining just enough human features for Nagabe to plausibly swathe them in flowing capes and tweedy trousers. Nagabe’s command of light, shadow, and line is superb, creating a strong sense of place without excessive reliance on screentone or tracing; his characters inhabit a well-defined world that has been vividly and imaginatively rendered on the page.

In the afterword to Wize Wize Beasts, Nagabe cheerfully jokes about “winning” readers over to his particular fandom. “I’d be deeply honored if this work exposes more people to non-human characters,” he notes. “And if you start to think, ‘Wow, non-human characters are awesome,’ go on. Get in there up to your neck.” I can’t say that Wize Wize Beasts made me a convert, but I did admire Nagabe’s creativity, sincerity, and honesty, as well as his willingness to take narrative risks that might not pay off with all readers. Your mileage may vary.