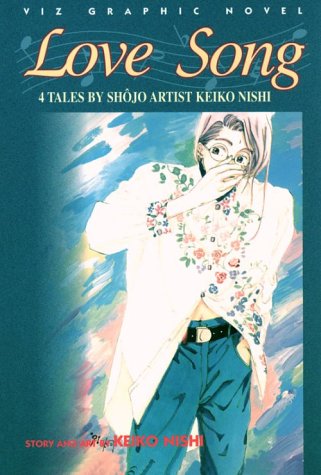 Back in the 1990s, Rachel Thorn labored hard to make Keiko Nishi a household name among American manga readers, translating six of her stories for VIZ. Two appeared in Four Shojo Stories alongside work by Moto Hagio and Shio Sato, and four appeared in a stand-alone volume called Love Song.

VIZ made a conscious effort to present Nishi’s work not just as comics, but as literature. Love Song boasted fancy endpapers — the kind you might find in the Everyman’s edition of Middlemarch — and a back cover blurb that defined shojo manga as “a literary genre of Japanese comics in which the relationships between characters are as meticulously crafted as the story’s action.” Lest the reader interpreted that statement to mean, “Here be romance comics,” the editor optimistically declared that shojo manga was “created by women for everyone!”

Though Nishi didn’t catch on with Western readers, it’s easy to see why Thorn championed her work: she’s a terrific, versatile storyteller, equally capable of writing light-hearted fantasies and character studies of deeply damaged people. Of the four stories that appear in Love Song, two are standouts: “Jewels of the Seaside,” a black comedy about three sisters who compete for the same man’s affection, with disastrous results, and “The Skin of Her Heart,” a sci-fi tale about a young woman torn between what she wants and what her mother wants for her. The other two stories — “Love Song” and “The Signal Goes Blink, Blink” — are also strong, if more conventional. “Love Song” focuses on an angry young woman who dominates her saintly boyfriend, while “The Signal Goes Blink, Blink” explores how fame transforms the life of a bullied teen.

Common to all four stories is a palpable sense of longing. The characters desperately seek human connection, but face genuine obstacles to their happiness. Yoshio Yamada, hero of “Signal,” is a perfect example: he’s the kind of small, quiet person whose shyness makes him a natural target for other kids’ scorn. (Even his own family detests him for his weakness.) When his newly discovered healing abilities land him television appearances, he worries what will happen if his powers fail him — not because he fears the stigma of being discredited, but because he fears being alone. “I’m afraid that if I lose this power, I’ll just go back to being a nobody again,” he tells his agent. “Are those people going to play with me? Will they come to school with me?”

The female protagonists of “Love Song” and “Skin of Her Heart” are also dissatisfied, though neither can fully articulate what they want. Saki, the heroine of “Love Song,” is perplexed by the intensity of her anger; though she readily admits that she was scarred by her first romantic experience, that alone cannot explain the cruel delight she takes in manipulating her current boyfriend. Lin-Lin, protagonist of “Skin,” also has difficulty pinpointing the source of her frustration, rejecting a suitor who could solve all of her financial and family problems. Only in the final pages of the story does she realize that moving to another space colony might change her life in ways that would help her “learn to open my heart to someone.”

Even the “Seaside” sisters are prisoners of their own desires. All three fancy their cousin Daniel, a handsome, polite young man, but each secretly worries that she compares unfavorably with her siblings. Their desperation is played for macabre laughs — poison factors into the narrative — but each sister’s pain and fear of rejection is very real; the punchline of the story is simultaneously amusing and horrifying, as we realize the true cost of their insecurities.

Nishi’s artwork is the perfect vehicle for such nuanced character studies, at times precise, elegant, and naturalistic, and at times loose and sketchy, with the white of the page playing an important role in underscoring the emotional distance between her characters. Her minimalist approach won’t be to every shojo fan’s liking, but she demonstrates that it’s perfectly possible to convey the interior lives of her characters without resorting to the kind of visual shorthands — flowers, sweatdrops, nosebleeds — that have been overused in contemporary shojo manga.

Readers wishing to track down a copy of Love Song should know that the title is officially out of print. (You won’t find it listed anywhere on the VIZ website.) Unlike Four Shojo Stories or A, A’, however, Love Song is still relatively easy to obtain through online retailers like Amazon, Barnes and Noble, and eBay. Highly recommended.