The opening pages of Sakamoto Days unfold with ruthless efficiency: in just a handful of panels, author Yuto Suzuki shows us how twenty-two-year-old Taro Sakamoto, once Japan’s most “feared and revered” hit man, became Mr. Sakamoto, twenty-seven-year-old husband, father, and shopkeeper. Though Sakamoto seems content being the neighborhood jack-of-all-trades, his former associates view him as a potential threat, dispatching Shin the Clairvoyant to kill him. Shin appears to have the upper hand in this contest–he’s younger, fitter, and, as his name suggests, telepathic–but Sakamoto quickly subdues Shin with a bag of cough drops and a well-timed kick, leaving Shin gasping for breath–and, oddly, eager to join forces with his old rival.

This initial encounter highlights Suzuki’s strengths and weaknesses as a storyteller. In the plus column is Suzuki’s ability to stage a great sight gag, as evidenced by Sakamoto’s MacGuyver-esque ability to transform ordinary objects into powerful weapons. Suzuki also makes the most of Sakamoto’s sangfroid; no matter how chaotic the scene or ridiculous his opponent, Sakamoto never betrays a hint of emotion, making him an excellent foil for the chatty Shin. In the minus column is Suzuki’s fixation with Sakamoto’s weight. Other characters routinely comment on how “out of shape” Sakamoto is, and express surprise at his speed and agility—Shin, for example, initially dismisses Sakamoto as a threat because “he’s gone all tubby now.” One or two comments in this vein are enough to subvert the idea that a skilled assassin needs to be fit to be lethal, but this “joke” is repeated almost every time Sakamoto mixes it up with a new bad guy.

Art-wise, Suzuki’s style is pleasingly organic, relying more on linework than screentone to create depth and volume. Suzuki compliments this approach with an imaginative use of perspective and panel shape that suggests the controlled frenzy of Sakamoto’s attacks. In chapter three, for example, Shin and Sakamoto attempt to rescue Officer Nakase, a newly-minted cop who’s been kidnapped by a motorcycle gang. Sakamoto uses a smoke bomb to surprise his opponents, then unleashes a series of kicks, body slams, and upper cuts to overwhelm the gang members: 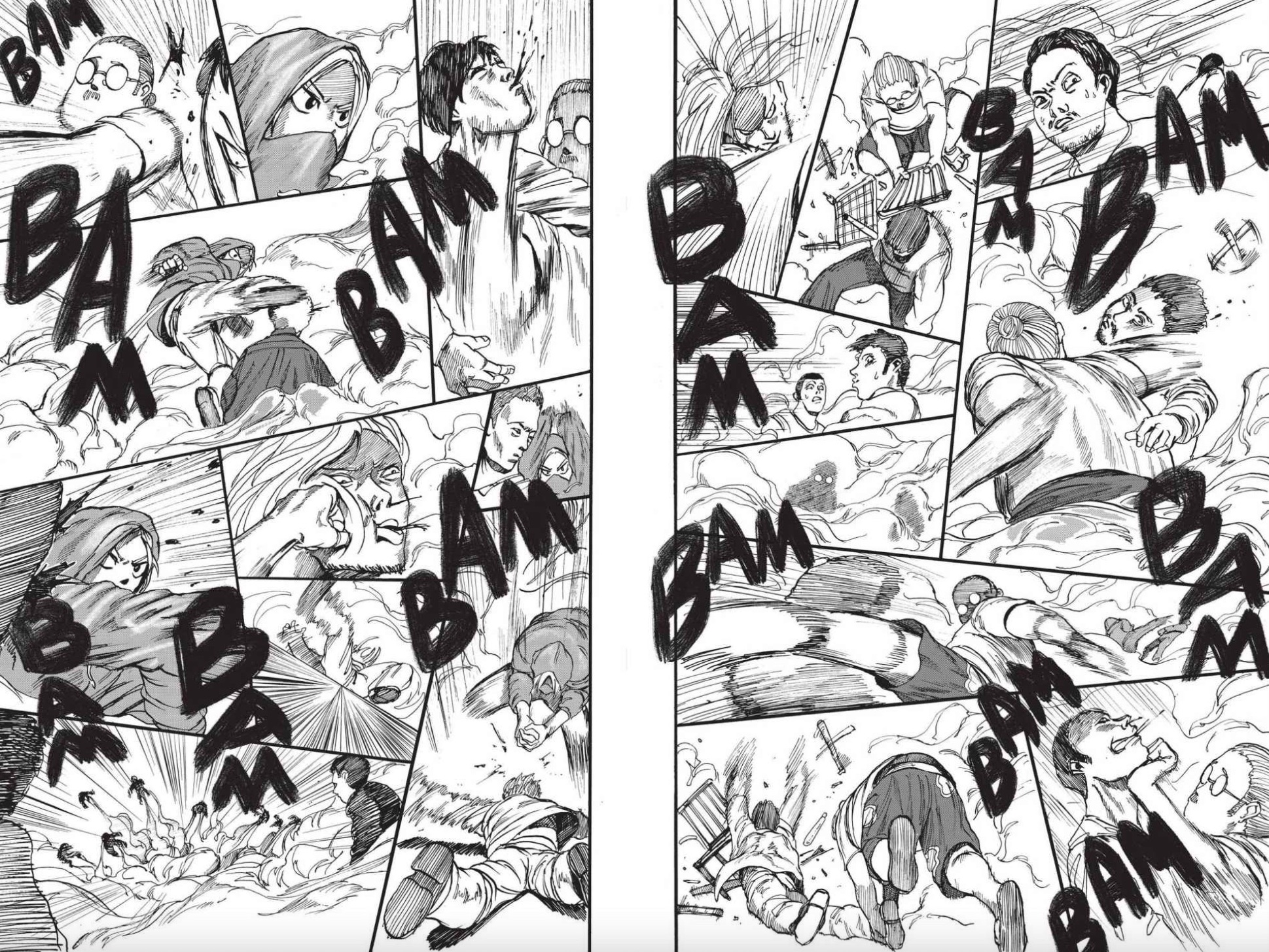 Suzuki presents the fight in a kaleidoscopic fashion, using panels of varying shapes and sizes to show how quickly Sakamoto dispatches his enemies. The density of the images allows Suzuki to compress the action into just a few pages, creating a reading experience that puts the viewer in the middle of the action, watching the fight unfold in something approximating real time–a welcome antidote the bloated, multi-chapter fights scenes characteristic of so many Shonen Jump titles.

If some of the later chapters aren’t as tightly executed as the first, Sakamoto Days nonetheless achieves a good balance between character development and karate-chopping, affording us enough insight into Shin and Sakamoto’s personalities to make their Laurel and Hardy dynamic amusing. Recommended.