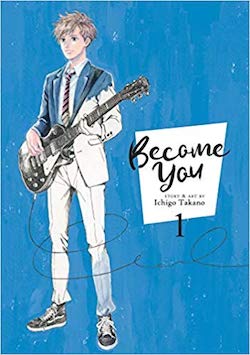 Ichigo Takano’s orange may be one the of best shojo manga published in the last ten years, offering readers a vivid, sympathetic portrait of five friends who get an unexpected chance to save a suicidal classmate’s life. Though orange explored dark emotional terrain, it was never mawkish; instead, orange ended on a hopeful note that showed younger readers that life goes on after tragedies big and small.

Become You, Takano’s latest series, mines a similar thematic vein, this time focusing on two emotionally damaged boys who form an improbable bond through music. And by “improbable,” I mean Taiyou and Hikari are temperamental opposites who initially seem ill-suited for friendship, let alone artistic collaboration. Taiyou is one of those only-in-manga characters whose dogged optimism shades into fanaticism—the kind of character who calls everyone his friend, and wears down skeptics with his relentless overtures. Hikari, by contrast, is a classic Character With a Secret, a former prodigy who abruptly abandoned the piano despite (or perhaps because of) his phenomenal success, keeping his classmates at bay with blunt comments. Naturally—by the immutable laws of Shojo Manga Plot Mechanics—Taiyou tries to recruit Hikari for a band, despite the fact that Taiyou is a tyro guitar player.

At first glance, Become You seems to be following a well-worn path in which an enthusiastic novice persuades a reluctant genius to mentor him, in the process drawing out his teacher and helping his teacher recover something that he lost—say, his joy in playing the tuba, or his relationship with an estranged family member. But Takano adds an interesting wrinkle to this familiar plotline: midway through volume one, we learn that Taiyou originally wanted to be an artist, but lost his desire to paint after being bullied by a teacher. In the aftermath of this encounter, what Taiyou really wants is to be good at something—anything, really—and will work diligently towards achieving that goal, even if he shows little or no aptitude for his chosen pursuit. Equally important, Taiyou is just as emotionally vulnerable as his would-be mentor, even though Taiyou papers over his anguish with bright smiles and cheerful comments.

As with orange, a magical plot device brings Become You‘s principal characters together–in this case, a mysterious cloaked figure who presents Taiyou with an electric guitar and words of Yoda-like encouragement. It’s not entirely clear if Taiyou is fantasizing or having a premonition, since his guardian angel looks an awful lot like Hikari. And while the ambiguity of these scenes has little impact on the reading experience, they occupy more space than the time-traveling letters did in orange—a mistake, I think, because Taiyou’s daydreams don’t add any special urgency or poignancy to the story. By contrast, orange‘s letters served a twofold purpose, setting the plot in motion and highlighting all the small ways that innocent comments or decisions could hurt someone as fragile as the suicidal Kakeru.

The other drawback to Become You is that Takano doesn’t seem to know much about music. Taiyou, for example, cheerfully states his intention to attend a “music college,” but lacks the rudimentary skills to play in sync with a metronome or sight-read sheet music. (He also seems blissfully unaware that conservatories require an entrance audition.) The concert sequences are similarly revealing: though Takano draws attractive, animated characters, and can put them through their emotional paces, she struggles to make Taiyou and Hikari’s musical performances come to life on the page, either by showing the physical effort necessary to making a sound—embouchure, hand position, posture—or by drawing convincing crowd shots that convey the impact of the music on listeners.

I’m not ready to give up on Become You just yet, however, as Takano has something worthwhile to say about pursuing activities for emotional fulfillment, rather than for personal achievement. She also explores the idea of artistic mentorship with honesty, acknowledging that the teacher-student relationship can have a profound effect on how a young artists finds his voice; any violation of that compact—an unkind comment, a dogged insistence on doing things the “right” way—can leave deep scars and stunt one’s artistic growth. Here’s hoping volume two strikes a better balance between the magical realism and the realities of being a musician. Tentatively recommended.