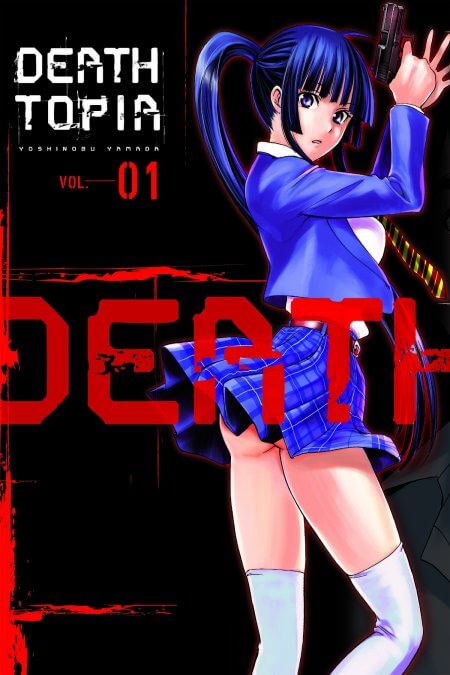 It’s never a good sign when you enjoyed the Baka-Updates thread about a manga more than the actual manga, but that’s the case for Deathtopia, a title that scores a hat trick for being gory, exploitative, and boring. Part of the problem is the story: it’s the umpteenth example of an ordinary teen discovering that he’s been chosen to save the world. Koh Fujimura, the hero of Deathtopia, is the only person who can detect the presence of “Them,” a group of super-human predators that commit sadistic, stagey murders. Aiding him in the quest to ferret out these menaces are Maya Hoshimiya, Yui Kisagari, and Saki Yagami, a trio of buxom special agents who favor bustiers and short skirts over traditional uniforms. (Call me crazy, but where do you holster a gun if you’re not wearing any pants?)

All of this would be easier to swallow if manga-ka Yoshinobu Yamada had bestowed any personality on his characters, or supplied them with motives for the work they do. None of the cast, however, show any traces of wit or curiosity; all of them behave like well-programmed robots, dutifully marching from one grotesque crime scene to the next. Yamada allows Koh a few moments of fear and confusion, but these beats land with the emotional force of a Linux manual since we know almost nothing about him. Even the character designs are generic: there’s a pretty girl with short hair and hot pants, a pretty girl with a pony tail and a school uniform, and a pretty girl with long hair and a suit. (Actually, she’s the only one who looks like a law-enforcement agent, since she’s wearing comfortable shoes.) The bad guys, by contrast, are so uniformly and cartoonishly ugly it’s a wonder that Koh, Maya, Yui, and Saki can’t identify them at 50 paces.

Perhaps the most telling sign that Yamada is more interested in cheesecake than plot is that he draws the female characters’ breasts with more individuality than their faces. Yamada further diminishes his female characters by reducing them to types — the psychopathic bitch, the aloof older woman — and making his teenage male hero miraculously “better” at monster-hunting, despite his young age and lack of training. The only evidence of Maya, Yui, and Saki’s superior skill is supplied by Koh himself in the form of a voice-over; he muses that “These women are amazing! Even I can tell that their every move is calculated,” although that statement is undermined by the way Yamada stages a subsequent shoot-out.

The manga’s best gambit is shamelessly pilfered from John Carpenter’s They Live! (1988). In this Reagan-era cult classic, sunglasses enabled the hero to see that aliens were living amongst us, using subliminal messaging to subdue and control humanity:

In Deathtopia, Koh gains a similar ability after eye surgery: he sees the monsters as humans with scribbly, mouthless faces, drifting unnoticed through Tokyo streets. Only when Koh dons glasses does he lose sight of “Them”; in an original touch, glass blocks his monster vision. For all the promise this idea holds, however, Yamada makes no attempt to explore its allegorical potential, instead lavishing most of his attention on dismembered corpses and topless girls. Carpenter, by contrast, used They Live! to explore the evils of consumerism and conformity and deliver one of the longest, goofiest, and most admired fight sequences in B-movie history.

In sum, Deathtopia is the sort of manga you might think was cool if you hadn’t read any manga, or were just hoping to steal a glimpse of naked girls. Anyone who’s read Alive: The Final Evolution, Bloody Monday, Death Note, Platinum End, or even Yamada’s Cage of Eden, however, won’t find much to distinguish Deathtopia from these other teenage male fantasies, as it lacks the verve, polish, and imagination of the best examples in this genre.