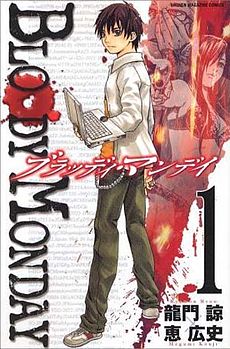 To judge from all the shonen manga I’ve read, the fate of the world rests in teenage boys’ hands: not only do they have the power to kill demons and thwart alien invasions, they’re also blessed with the kind of superior intelligence that makes them natural partners with law enforcement. Bloody Monday is a textbook example of the teen-genius genre: high school student Fujimaru Takagi dabbles in crime-solving, hacking into secure networks and decoding encrypted files on behalf of the Public Security Intelligence Agency. (Naturally, he works for the PSIA’s super-secret “Third-I” division, which is “comprised solely of elites.”) Fujimaru’s deductive skills are put to the ultimate test when his father is falsely implicated in a murder. To find the real killer, Fujimaru must uncover the connection between his father and the “Christmas Massacre,” a terrorist attack that left thousands of Russian civilians dead, their bodies covered in boils.

In the right hands, Bloody Monday might have been good, silly fun, 24 for the under-twenty-four crowd. The script, however, is pointed and obvious, explaining hacker culture and internet technology to an audience that has grown up on the world-wide web: are there any fifteen-year-olds who don’t grasp the basics of computer viruses? The characters, too, seem impossibly dim, thinking out loud, missing obvious connections, and reminding each other how they’re related, whether they’re fellow reporters for the school newspaper or siblings. Small wonder they don’t realize that their school has been infiltrated by an enemy agent.

The art is more skillful than the script, with polished character designs and detailed backgrounds. The adults actually look like adults, not teenagers with unfortunate laugh lines, while the scenes aboard the Transsiberian Railroad convey the harshness of the Russian landscape. Though artist Kouji Megumi nevers misses an opportunity to show us an attractive woman in her underwear — and really, what well-trained assassin doesn’t snuff a target or two while wearing only a matching bra-and-panty set? — the fanservice never overwhelms the plot. The action sequences, too, are well-staged, using swift cross-cuts and imaginative camera angles to heighten the suspense.

In the end, however, the slick visuals aren’t enough to compensate for the flat-footed storytelling. A plot as potentially interesting and complex as Bloody Monday‘s should challenge the reader to arrive the solution independently, not spoon-feed it; too often, the story seems to have been written in boldface, depriving the reader of an opportunity to guess the outcome of the story for herself.