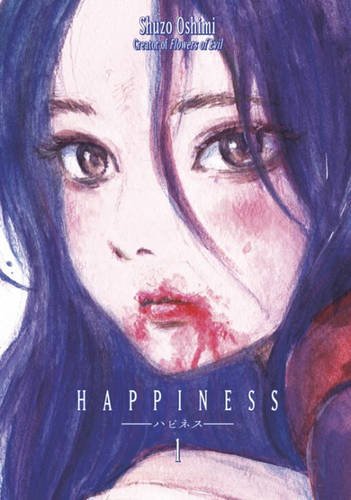 The first chapter of Happiness reads like a teenage boy’s answer to Are You There, God? It’s Me, Margaret. Makoto, the principle character, is doing his best to cope with the indignities of being fourteen: he’s bullied by the popular kids, pestered by his well-meaning but clueless mother, and embarrassed by his lustful reactions to pretty girls. Though he has one friend — the equally uncool Nunota — Makoto spends most of his time alone.

A nighttime trip to the convenience store, however, jolts Makoto out of his routine. In a dark alley, a female vampire tackles and pins him to the ground, offering the following ultimatum: “Do you want to die like this, or do you want to be like me?” With tears and snot streaming down his face, Makoto whimpers, “I don’t want to die,” thus beginning his transformation from ordinary teen to bloodsucker.

If Makoto thought that wet dreams and wedgies were awful, he soon discovers that they pale in comparison with the first stages of vampirism. He suffers from an unquenchable, almost violent thirst and finds direct sunlight blisteringly painful. Worse still, his sense of smell is now so acute that he swoons and sweats in the presence of bloody noses, cuts, and girls, a symptom that sends him into an even deeper spiral of shame. The only potential upside to his condition is his supernatural strength: though he still looks like a 100-pound weakling, he can leap from great heights and deliver a lethal karate chop when the scent of blood is in the air.

Given Makoto’s age, it’s not surprising that author Shizuno Oshimi treats his hero’s transformation as a metaphor for puberty itself. In the manga’s earliest scenes, Oshimi frankly documents Makoto’s efforts to cope with hormonal surges and maternal helicoptering, capturing Makoto’s discomfort in his own skin. As Makoto begins turning into a vampire, however, his increasingly urgent thirst for blood amplifies the very aspects of puberty that most embarrass him — his keen interest in sex, his inability to conceal his arousal from others — making him feel even more powerless.

To capture Makoto’s turbulent emotions, Oshimi employs a variety of artistic styles. Some panels are rendered in smudgy pastels, suggestive of a foggy evening, while other panels are rendered in swirling, pulsating lines reminiscent of The Scream. These visual interludes last only a page or two, but vividly capture the nausea, pain, and confusion Makoto experiences in the grips of bloodlust.

Perhaps no scene is as evocative as that first encounter between Makoto and the female vampire. Oshimi uses rapid shifts in perspective and a few fleeting images — a shadowy figure plunging through space, a dark smear of blood — to indicate what’s happening. The extreme close-ups and feverish pacing neatly mimic Makoto’s growing sense of panic as he considers the possibility of dying in an alleyway — and not just any death, but a potentially humiliating one. (And really, what could be worse than that from a fourteen-year-old’s perspective?)

The pacing, like the artwork, is expertly handled. Oshimi has a knack for lulling readers into a false sense of security that Makoto will transcend (or master) his vampirism and silence his tormentors. Then — bam! Oshimi inserts a twist or introduces a new character who contradicts our sense of how socially maladroit or invulnerable Makoto really is. The appearance in volume two of a new bloodsucker, for example, reveals the extent to which vampires pose an active threat to one another — something that Makoto in his solipsistic misery never considered when he agreed to become a vampire himself.

And speaking of volume two, Oshimi does an excellent job of expanding and developing the cast of characters. By volume’s end, there’s more at stake than Makoto’s desire to escape humiliation; Makoto must decide whether to become a full-fledged vampire or fight for his humanity, a decision complicated by his budding friendship with a female classmate. How Makoto resolves this dilemma remains to be seen, though his struggle should provide plenty of dramatic grist for volume 3 (available February 14th).

The bottom line: Happiness is a rare vampire manga with bite: it’s smart, stylish, and unsettling, drawing readers into Makoto’s world with an honest look at the horrors of being fourteen. And what could be scarier than that?