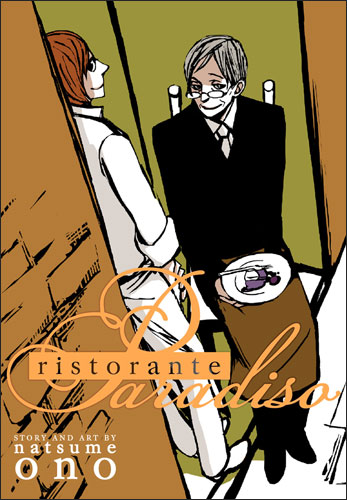 Oh, Natsume Ono, I just can’t quit you! I was not wild about not simple, but try as I might, I couldn’t dismiss you as just another overrated indie artist. I couldn’t shake the memory of how I felt when I read the first few chapters of House of Five Leaves — that incredible sensation of discovering a new voice with something fresh to say, of having my love for manga validated all over again. So I picked up Ristorante Paradiso with high hopes. I’m happy to report I felt butterflies and excitement, just like the first time, and am firmly back on Team Ono.

Not that you didn’t test my patience — those first twenty pages were a slog, filled with the kind of amateurish moments that I might expect in a freshman effort. We learn that Casetta dell’Orso is popular because a character says it is; that the waiters are handsome because a character comments on how good-looking they are; that the loyal female clientele comes for the help not the food, again, because a character states it as a fact. In short, you have a bad case of telling instead of showing, of not trusting your artwork to demonstrate the restaurant’s popularity or the studliness of the wait staff. I nearly demanded the check.

Then something wonderful happened: the characters began to interact with each other, and in their impassioned conversations, we began to appreciate who they were, what drew them into the restaurant’s orbit, and why they seem stuck in certain unhappy, unfulfilling roles. Olga, the heroine’s mother, provides an instructive example. In the first few pages of the book, we witness a tense exchange between Olga and Nicoletta, the daughter she abandoned. Nicoletta, now twenty-one, has shown up on her mother’s doorstep demanding to be acknowledged, something Olga refuses to do out of fear that her current husband will leave her. It seems like you were stacking the deck against Olga, Ms. Ono, as Olga initially comes off as a dreadful Mommie Dearest who’s so committed to protecting her own interests that she initiates an elaborate charade to conceal Nicoletta’s identity. But then you slowly reveal how other people see Olga, as a vibrant, intelligent, giving woman who radiates warmth and charm. You help us understand that Olga is both a lousy, selfish mother and a loving wife to her second husband, two roles she struggles to reconcile. That we finish the book feeling sympathy for daughter and mother is testament to your storytelling skills and your obvious affection for your characters.

Your artwork, like your grasp of character, is stronger and more assured in Ristorante Paradiso than it was in not simple. As we watch the waiters moving through Casetta dell’Orso, for example, it’s easy to see why the female clientele swoons: the male characters have strong, distinctive faces that leave a lasting impression. They’re not conventionally handsome, but those faces have a wonderful, lived-in look that’s inviting and alluring — think of Alan Rickman, William Powell, or Marcello Mastroianni, not the smoothly perfect bishonen we’re so accustomed to seeing in manga. When Olga explains her attraction to Lorenzo, her husband, the artwork supports what she says: he’s drawn not as a fantasy object, but as a rugged, bearlike man whose virility is obvious even though his body and face are beginning to soften in middle age.

Put simply, Ms. Ono, you won my heart back. I found Ristorante Paradiso an engaging story filled with complicated, true-to-life characters who I enjoyed getting to know. It was a welcome departure from the emotional torture-porn of not simple, and a promise of good things to come: Gente and House of Five Leaves.