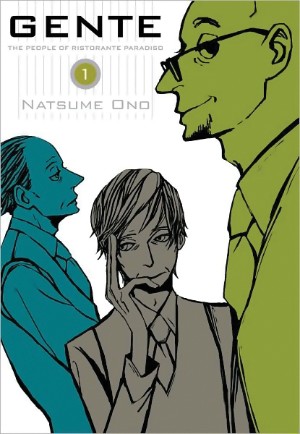 I find Natsume Ono’s work rewarding and maddening in equal measure. On the plus side, I love her idiosyncratic style; her panels are spare and elegantly composed, with just enough detail to convey the story’s time and place. Her character designs, too, are a welcome departure from the youthful, homogenized look of mainstream shojo and shonen manga. Her people have sharp features and rangy bodies, yet inhabit their skins as comfortably as the proverbial pair of old shoes; it’s rare to see middle age depicted so gracefully. And speaking of middle age, her characters’ maturity is another plus, as they grapple with the kind of real-world problems — failed marriages, aging parents, child-rearing — that are almost never addressed in manga licensed for the US market.

On the minus side, Ono’s artwork is an acquired taste; the reader sometimes has to take it on faith that a particular character is handsome or pretty, as Ono’s children and twenty-somethings are less persuasively realized than her older characters. Then, too, Ono’s fondness for depicting everyday moments can rob her stories of any meaningful dramatic shape, creating long, meandering stretches where very little happens and even less is revealed about the characters. More frustrating still is her tendency to vacillate between allowing readers to interpret events for themselves and slapping readers across the face with a pointed observation, as if she doesn’t trust the audience to read the scene properly without a little authorial intervention.

VIZ has been lobbying hard to make Ono’s name familiar to American readers, first with not simple, a story about an abused young drifter, and then with Ristorante Paradiso, a dramedy exploring the complicated relationship between Nicoletta, a twenty-something woman, and Olga, the mother who abandoned her. This fall, VIZ will release two more works by Ono: Gente: The People of Ristorante Paradiso (August) and House of Five Lives (September). Gente, the weaker of the two, is a three-volume prequel to Ristorante Paradiso that focuses less on Nicoletta and Olga and more on the bespectacled waitstaff at Cassetta dell’Orso, the trattoria owned by Olga’s husband. House of Five Leaves is a very different beast, a historical drama reminiscent of such films as Hara Kiri and The Twilight Samurai. Its hero, Akitsu Masanosuke, is a timid ronin who can’t hang on to a job; when a businessman approaches him with work, Masanosuke readily accepts, not realizing that Yaichi, his new employer, runs a crime syndicate that specializes in kidnapping.

Though Gente can be read independently of Ristorante Paradiso, readers unfamiliar with the earlier work may feel like they’ve walked into a party that’s already in progress, as many of the stories assume that the reader will be familiar with — and therefore interested in — Cassetta dell’Orso’s employees. One of the few chapters that works well for newbies and fans alike is “Luciano,” which explores the relationship between a widower and his daughter. The story succeeds because the dynamic between them feels authentic; the daughter’s persistence and gentle needling about finding a new partner is met with equally quiet resistance from her father.

Other stories, however, preserve the rhythms of everyday life with a little too much fidelity to be interesting. “Un giornata di Vito,” for example, consists primarily of a man talking, shopping, and doing crossword puzzles with an architecture student half his age, while “Il primo anniversario” depicts a luncheon for the restaurant’s employees; in the chapter’s only dramatic moment, a waiter injures his back and retires to the kitchen to lie down. A good author doesn’t need to contrive a Big Event to enliven a slice-of-life vignette, of course, but compelling dialogue helps, and it’s here that both stories stumble. The conversation tends towards the earnest and dull, with characters occasionally stating things about themselves in a bald, unnatural fashion that seems fundamentally at odds with Ono’s desire to let us learn about her characters from watching them walk through their daily routines. 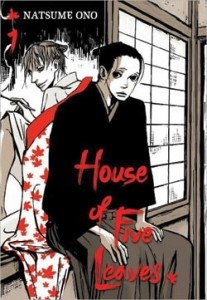 House of Five Leaves, too, focuses less on Big Events and more on everyday activity, but in Leaves, Ono’s restraint serves an important dramatic purpose: she’s showing us events through Masanosuke’s eyes, as he tries to reconcile the bandits’ seemingly ordinary lives with their extraordinary behavior. Making the reader‘s task more difficult is that Masanosuke isn’t very astute. He tends to focus on a kind gesture or a friendly conversation, missing many of the important aural and visual cues that might enable him to understand what’s happening — a trait that the group exploits. In one chapter, for example, Yaichi encourages Masanosuke to accept a job as a bodyguard for a merchant family while the group plans its next kidnapping. Masa befriends his new employer’s son, never realizing that his true assignment is to infiltrate the target’s household so that Yaichi’s minions can snatch the boy for ransom.

Whether Masa will harden over time or cling to his desperate belief that the Five Leaves are engaged in an honorable enterprise remains to be seen. What is apparent, however, is that this naive, self-effacing man will eventually be provoked to violence. And when that happens, we’ll appreciate the meticulous way in which Ono has been building to that moment, as we’ll at have real sense of who Masa is, and why he’s been reluctant to pick up a sword. Though Toshiro Mifune and Hiroyuki Sanada have made entire careers out of playing characters like Masanosuke, Ono makes a persuasive case that you don’t need a flesh-and-blood actor to tell this kind of story with heartbreaking intensity; she can do the slow-burn on the printed page with the same skill and intensity as Masaki Kobayashi and Yoji Yamada did on the big screen.

17 thoughts on “Gente and House of Five Leaves”