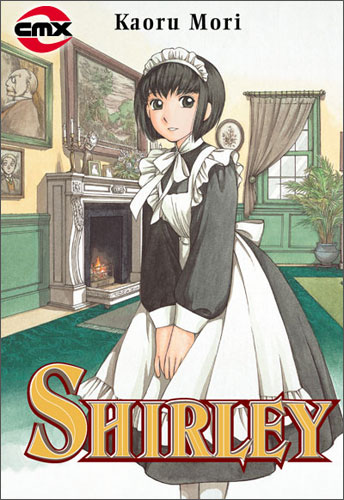 At first glance, Shirley looks like a practice run for Emma, a collection of pleasant, straightforward maid stories featuring prototype versions of William, Eleanor, and Emma. A closer examination, however, reveals that Shirley is, in fact, a series of detailed character sketches exploring the relationships between three maids and their respective employers. And while some of these sketches aren’t entirely successful — Kaoru Mori cheerfully describes one as “an extremely cheap story about a boy and an animal” — the five chapters focusing on thirteen-year-old Shirley Madison and her independent, headstrong employer are as good as any passage in Emma.

That employer is twenty-eight-year-old Bennett Cranley, a smart, resourceful beauty. Though Bennett comes from a proper Victorian family, she deflects talk of marriage, instead taking pleasure in single-handedly running her own tavern. Of course, finding time to clean house and cook meals is a challenge when you spend most of the day on the job, so Bennett does what many of us working gals wish we could do: she advertises for a maid. The sole applicant is Shirley Madison, a neat, quiet girl who has no family and no home, but does have experience dusting, sewing, and baking “tipsy cake” — the deciding factor for Bennett, who hires Shirley on the spot.

What follows are five vignettes depicting Shirley and Bennett’s day-to-day life. The best of these, “Little Marie,” begins with Bennett purchasing a porcelain doll for Shirley. At first, Bennett frets that the doll was “too childish” a gift, as Shirley’s muted reaction registers as indifference. Later that evening, however, Bennett stumbles across Shirley hard at work on a dress for her new doll. In Shirley’s violent embarrassment at being discovered, we see hints that she’s been ill-treated throughout her working life, denied the opportunity to indulge in childish pleasures, while in Bennett’s calm response, we see the gentle, motherly woman beneath her bold public persona; she refrains from criticizing Shirley, instead praising the girl for her “fashion sense” and sewing skills. The final panels of “Little Marie” are an effective coda to their exchange, showing us the degree to which Shirley idolizes her employer; a faint smile passes across the girl’s lips as she gazes at the doll, rehearsing Bennett’s words in her mind.

Not all of the stories collected in this volume are as effective as “Little Marie.” The two stand-alone chapters, “Me and Nellie One Afternoon” and “Mary Banks,” both feel unfinished, a point underscored by Mori’s own refreshingly candid postscript. She notes that a suitor introduced in the beginning of “Me and Nellie” vanishes just a few pages into the story, never to be seen again (“my brain couldn’t handle two plotlines at once,” she explains), while one of the main characters in “Mary Banks” was inspired by… The A-Team. No, really: Mori claims that Sir Burton, an ornery trickster who booby-traps his house, was modeled on “Sean Connery mixed with a little of the A-Team’s Hannibal. It’s very clear where I got the pranks from.” Clio is a peculiar muse indeed!

Like the storylines, the artwork in Shirley and Emma appears similar, right down to the character designs; in her glasses and tidy bun, Nellie is the spitting image of the bespectacled Emma. Comparing the two works side by side, however, it quickly becomes obvious just how much denser Emma‘s artwork is. Emma‘s layouts are richly detailed, conveying the Victorian passion for things — for overstuffed drawing rooms, heavily patterned drapes, and richly embroidered gowns — while Shirley‘s spare layouts draw more attention to the characters’ interior states than to the material trappings of their daily lives.

Mori certainly draws her share of parlors, libraries, and kitchens in Shirley, though she often jettisons the background details after establishing the setting, preferring instead to focus on her characters’ faces, hands, and posture. In one of the most effective sequences in the volume, for example, Shirley waits for her mistress to return from a night on the town. Though Mori depicts Shirley perching on a chair and peering out a window, most of the images focus tightly on Shirley’s face: first as she anticipates Bennett’s arrival, then as she joyfully greets her, and then as she shrinks away, uncertain of how to read Bennett’s stern demeanor. The two barely exchange a sentence, yet in Shirley’s crestfallen expression and slumped shoulders, we again see Bennett as Shirley does, as a powerful, glamorous figure whose approval she craves.

CMX obviously licensed Shirley with an eye towards pleasing Emma fans, yet Shirley also works on its own terms; if anything, folks reluctant to commit to a ten-volume series, or who roll their eyes at the prospect of a manga-fied Forsythe Saga, may find this lovely, understated collection more to their liking than the melodramatic saga of William and Emma’s forbidden romance. Highly recommended.

This essay is part of the Moveable Manga Feast, a virtual book club that examines a different manga each month. This month’s MMF is being hosted by Matt Blind of Rocket Bomber; click here to view the full list of contributions. 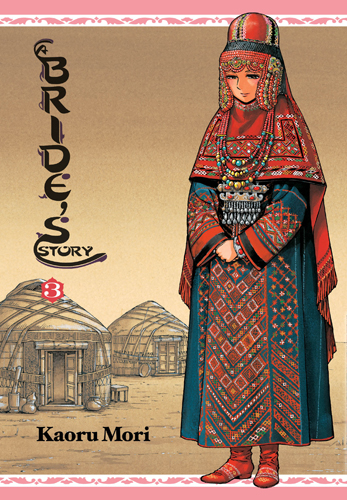 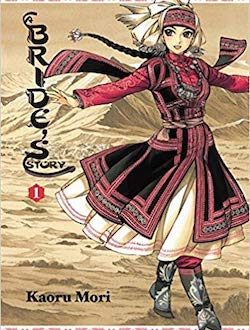