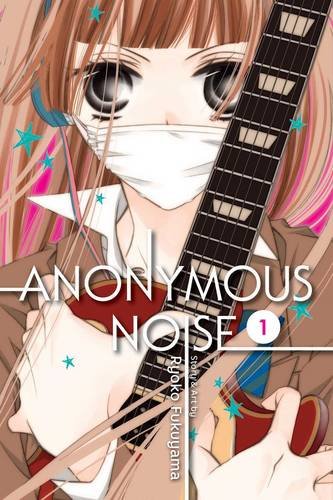 Anonymous Noise is to manga what “Talk Dirty to Me” is to contemporary hit radio: both have a killer hook — that plot! that sax! — and inane lyrics.

The story begins with a vorspiel of sorts. Nino, a tot with a golden voice, bonds with her next-door neighbor Momo, who shares her enthusiasm for singing, if not her sense of pitch. The two are inseparable until Momo’s family abruptly moves away. While pining for her lost friend, Nino crosses paths with Yuzu, a short, feisty songwriter whose tunes help Nino discover her true potential as a vocalist. He, too, unexpectedly skips town, leaving Nino despondent once again — so despondent, in fact, that she begins wearing a surgical mask to prevent herself from screaming. (No, I’m not making that up.)

Flash forward to the present: Nino is now in middle school, roaming the halls in a mask and obsessing about Momo. A chance encounter reunites her with Yuzu, who’s penning tunes for the school’s struggling Popular Music Club. What Nino doesn’t realize is that Yuzu’s bandmates are, in fact, members of In No Hurry to Shout, a pop act as famous for their identity-concealing costumes as their chart-topping songs. (Apparently no one else has put two and two together, either, as the snotty school council president regularly threatens the club with termination.) Nino agrees to sit in for the club’s vocalist, unwittingly auditioning for In No Hurry to Shout in the process.

Despite its soap-opera plotting, Anonymous Noise never gels into a compelling story. One contributing factor is the characters, who are barely fleshed out. Nino, for example, is defined almost exclusively by her capacity for self-pity; she mopes incessantly, mooning over Momo as if he’d just moved away. (Six years have elapsed since Momo’s family skipped town.) Her romantic prospects are also one-note characters: Yuzu is a blustery jerk who yells, cajoles, and insults Nino, while Momo is sweetly chivalrous, the perfect boyfriend-in-training.

Another contributing factor is the lackluster artwork. Though other characters gush about Nino’s voice, Ryoko Fukuyama never *shows* us that Nino has the goods. We see close-ups of Nino’s gaping mouth and a smattering of musical notes whenever she warbles a tune, but we could just as easily infer that she was shouting, yodeling, or yawning from the lifeless, unimaginative way in which she’s drawn. A quick glance at Nodame Cantabile, Your Lie in April, Ludwig B., solanin, or Nana, demonstrates that it *is* possible to show how much physical effort it takes to produce a good sound, and what effect that sound is having on the audience. While such gestures don’t replicate the full experience of hearing a great band in person, they suggest what it might be like — something that Anonymous Noise fails to do on any level.

The bottom line: Anonymous Noise is too bland to be memorable, and too earnest to be fun. Not recommended.