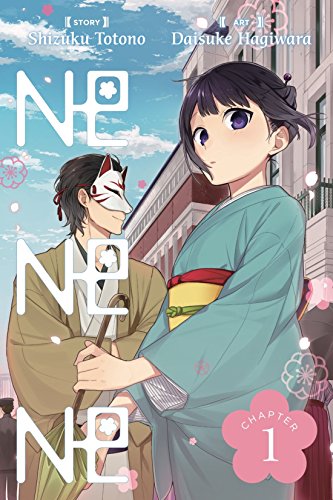 Ne Ne Ne sounds like E.L. James fanfic: the lead character is a virginal lass who’s forced into an arranged marriage with a sexy, mask-wearing man twenty years her senior. The actual story, however, is much less kinky than my capsule summary would suggest. Like millions of other nineteenth-century couples, sixteen-year-old Koyuki and thirty-seven-year-old Shin begin their married life as strangers, their union one of familial expediency rather than romance. Each entertains different ideas about what constitutes a proper marriage: for Koyuki, being married means homemaking and child-rearing, while for Shin, being married means mindful companionship. Most of their conflict stems from Koyuki’s immaturity, as she bursts into tears every time she burns a meal, tumbles off a ladder, or ruins one of Shin’s yukatas.

Though Koyuki’s bungled chores and teary monologues scream “moe,” Ne Ne Ne retains a core of emotional honesty that’s missing from other rom-coms about clumsy young girls and their older male admirers. The secret lies with the manga’s nuanced portrayal of Koyuki and Shin. Artist Daisuke Hagiwara does a fine job of showing us the degree to which the characters’ ages influence their expectations about married life, using small gestures — a shrug of the shoulder, a chaste kiss, a longing glance — to reveal how carefully the two are approaching their new roles. Author Shizuno Totono also raises the question of sex, hinting at the characters’ mutual attraction while acknowledging the moral and ethical dilemmas posed by Shin and Koyuki’s age gap.

Ne Ne Ne isn’t all angst and meaningful glances; Totono and Daisuke dish out plenty of jokes and sight gags, too, going to great lengths to demonstrate that Shin never takes his mask off. (Not even when he’s doing the laundry! Or snoring on a futon!) Shin’s mask serves a legitimate purpose beyond generating jokes and occasional moments of erotic tension, however: it’s a symbol of his profession — priest — and his connection to the supernatural world. In one of the story’s loveliest scenes, Shin gives Koyuki an impromptu lesson on how to spot yokai. Koyuki’s face conveys her profound sense of wonder at seeing her first dragon, and her delight at forging a small but meaningful connection with Shin — something she’s struggled to do in their more routine interactions as husband and wife.

Totono and Daisuke are less successful at wringing humor out of the couple’s interactions with supporting players. These characters are two-dimensional at best, defined by a single trait or habit that determines how they react to Koyuki and Shin’s marriage. Their brash neighbor Shouta, for example, cracks wise about the age gap between Shin and Koyuki — at one point, he implores Koyuki to marry him “when that old guy dies” — but his comments are anachronistic; it’s hard to imagine a young man in Meiji-era Japan finding an arranged marriage unusual, or speaking to his elders with such blatant disregard for etiquette. Koyuki’s father is similarly two-dimensional, a walk-on role whose main function is to defend his daughter’s chastity with comic fury. (He forbids Shin to consummate the marriage until Koyuki turns 20.) As with Shouta, these scenes don’t contribute much to our understanding of the period setting or the family dynamics that brought Shin and Koyuki together; they do, however, remind us that Shin is waaaaaaaay older than Koyuki.

If Totono and Hagiwara sometimes seem too intent on proving to the reader that Ne Ne Ne is more than just a pervy tale about an old guy in a mask and his child bride, the manga nevertheless manages to be funny, sweet, and honest about the challenges of marital life — something I didn’t expect from a story with such a ludicrous premise. Recommended.

Yen Press is simultaneously publishing the English-language edition of Ne Ne Ne as it’s released in Japan. As of March 20, 2017, four chapters are available. They can be purchased individually or as a package through Amazon, Barnes & Noble, Book Walker, ComiXology, Google Play, iBooks and Kobo.