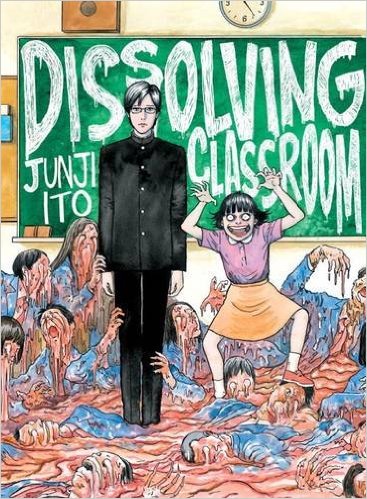 The title of Junji Ito’s latest work is a nod to one of his seminal influences: Kazuo Umezu, author of such bat-shit classics as Cat-Eyed Boy, Orochi Blood, and, of course, The Drifting Classroom. Using the same techniques as Umezu — shocking imagery, gross-out humor, and far-out plot twists — Ito spins an elaborate yarn about the mysterious Azawa siblings. Yuuma, the handsome older brother, seems like a model teenager: he strenuously avoids conflicts with peers, and is unfailingly polite to his elders. Younger sister Chizumi, by contrast, is a hellion. With her kohl-rimmed eyes and Cheshire-cat sneer, she looks like a junior Harley Quinn as she gleefully stalks classmates, harasses her brother’s girlfriend, and vigorously disputes her brother’s claims of parental neglect.

Each chapter of the Dissolving Classroom hinges on the discovery that Yuuma and Chizumi are not who they seem to be. In “Dissolving Apartment,” for example, the Azawas’ new neighbors are initially impressed by Yuuma’s composure and maturity, and are moved to intervene when they overhear nightly rows at the Azawas’ unit. Though appalled by Chizumi’s crude pranks and bizarre comments, the neighbors see her behavior as evidence that Mr. and Mrs. Azawa are abusing their children, an impression confirmed by the parents’ secretive behavior. Only when the neighbors interrupt one of the family’s heated skirmishes do they realize the true parent-child dynamic in the Azawa home — knowledge that comes too late to save them from a gory fate.

Other stories approach the question of false appearances from a different angle. In “Dissolving Beauty,” for example, Yuuma behaves like a teenage girl’s fantasy of the perfect boyfriend: he’s attentive and reassuring, always ready to declare, “Your beauty is exceptional.” What his girlfriend doesn’t realize is that Yuuma’s flattery is toxic — that in appealing to her vanity and insecurity, Yuuma’s words are warping her into a grotesque caricature of her former self. And when I say grotesque, I mean it; the poor thing resembles Margaret Hamilton in The Wizard of Oz, right down to the boils and pointy chin.

Although Ito’s scenarios lack the visceral weirdness of Kazuo Umezu’s, Ito’s superior draftsmanship serves him well in Dissolving Classroom. Yuuma provides an instructive example: as Ito draws him, he’s the epitome of the nice young man, a blandly handsome canvas onto which adults and teens can project their own desires. His exaggerated gestures — downcast eyes, supplicating posture — initially register as desperation, as if he’s apologizing for a political scandal or an international diplomatic incident. Look closer, however, and we see a note of eroticism in the way Ito draws Yuuma’s face; those rolled eyes are more expression of ecstasy than shame, hinting at Yuuma’s real reason for bowing and scraping.

Ito seeds the narrative with other visual clues about what’s motivating Yuuma: demonic eyes peering through a veil of fog, a clandestine animal cemetery. When we finally learn Yuuma’s not-so-surprising secret, Ito pulls out all the stops. The climax is a molten flow of brains, limbs, and entrails that’s amusingly reminiscent of the Ark of the Covenant scene in Raiders of the Lost Ark. The effect is less scary than preposterous, but suggests that we’re all too willing to believe that a grand display of manners is evidence of good character, rather than an effort to deflect attention away from egregious behavior.

It’s only in the bonus story “Children of the Earth” that we see Ito at his most Umezian — the Ito familiar from Gyo, Uzumaki, and Tomie. In this brief vignette, parents frantically scour the woods for a missing kindergarten class. What they discover is genuinely unnerving: their children have transformed into something not quite human, not quite animal, and not quite vegetable, sitting uncomfortably between these three planes of existence. Ito’s nightmarish imagery harkens back to the yokai prints of Tsukioka Yoshitoshi and Utagawa Kuniyoshi in which ordinary creatures — catfish, tanuki — became monstrous through the addition of exaggerated human features. But “Children of the Earth” also has affinities with Umezu’s manga; like Umezu, Ito is good at excavating the subconscious, making us confront our most disturbing thoughts and dreams in Grand Guignol fashion.

If the rest of Dissolving Classroom doesn’t quite reach the same Umezian heights — or is that depths? — as “Children of the Earth,” it still makes a fine introduction to Ito’s work. It’s coherently plotted, crisply drawn, and provocative enough to make all that gory excess meaningful. Recommended.

One thought on “Dissolving Classroom”