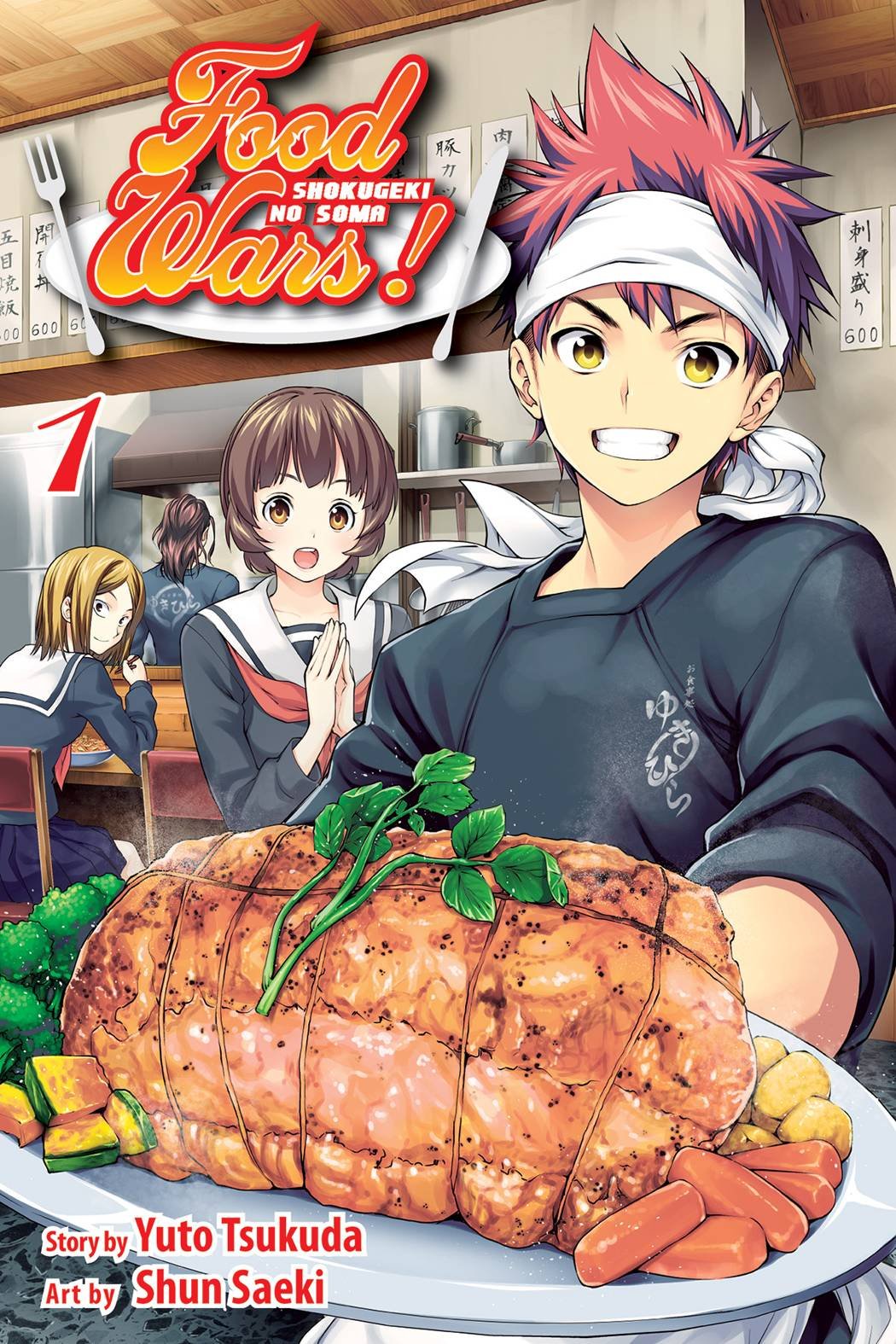 Did you receive an Amazon or RightStuf gift certificate this holiday? If so, this post is for you! Below, I’ve reviewed the first volumes of three series that debuted in 2014, offering a quick-and-dirty assessment of each. Already read Food Wars? Fear not—I’ve also tackled Manga Dogs, a comedy about a teen manga artist, and Yukarism, a time-traveling, gender-bendering manga from Chika Shiomi (Canon, Yurara).

Food Wars begins with an only-in-manga scenario: Soma Yukihira’s dad shutters the family’s greasy spoon restaurant and lights out for America, leaving his son behind. With no place to go, Soma enrolls at Totsuki Culinary Academy, a hoity-toity cooking school that prides itself on its wealthy alumnae, rigorous curriculum, and high attrition rate. Soma’s working-class background is a major handicap in this environment, but his can-do attitude and culinary instincts allow him to triumph in difficult situations, whether he’s salvaging an over-salted pot roast or wowing an unscrupulous developer with a simple potato dish.

In theory, I ought to hate Food Wars for its cartoonish characters and abundant cheesecake, two qualities I generally despise in a manga. But here’s the thing: it’s fun. Soma repeatedly shows up bullies and snobs with his ability to transform everyday dishes into haute cuisine, proving that good food doesn’t need to be fancy. Though Soma’s foes are stock types—the Busty Bitch, the Rich Mean Boy, the Teacher With Impossibly High Standards—Shun Sakei’s crisp caricatures make them seem like fresh creations. I wish I could say the same for Sakei’s abundant fanservice, which quickly wears out its welcome with porny images of women enjoying Soma’s cooking. These pin-up moments are supposed to be funny, I guess, but the heavy emphasis on heaving cleavage and bare skin seems more like a concession to teenage male taste than an organic part of the story.

The verdict: I can’t decide if Food Wars is a guilty pleasure or a hate read, but I’ve just purchased volumes 2-4.

Manga Dogs has a terrific premise: a teenage artist decides to enroll in her school’s manga program, only to discover that her teacher is inept, and her classmates are pretty-boy otakus with no skill or work ethic. When Kanna’s classmates discover that she’s actually a published artist, Fumio, Fujio, and Shota glom onto her in hopes of breaking into the business—even though her debut series is on the verge of being cancelled.

With such a ripe set-up, it’s a pity that Manga Dogs is DOA. Part of the problem is that the script panders to the reader at every turn, whether it’s poking fun at reverse-harem tropes or saddling the characters with pun-tastic names inspired by famous manga creators. The author spends too much time patting the reader on the back for “getting” the jokes and not enough time writing genuinely funny scenarios or imbuing her characters with more than one personality trait each. The other issue is pacing: the story and artwork are both frenetic, with characters screaming, jumping, and flapping their arms on almost every page. By the end of the third chapter, I felt as if someone had beaten me up for my lunch money while asking me, “Do you think I’m funny? No? Now do you think I’m funny?”

The verdict: Just say no.

Yukarism combines the supernatural elements of Rasetsu with the historical drama of Sakuran, then adds a dash of gender-bending weirdness for good measure. The story revolves around Yukari, a best-selling author whose novels explore the history of Edo’s red-light district. Though fans attribute the abundant details in his writing to research, Yukari has an even better strategy for learning about the past: he visits it! When he returns to the 1800s, however, Yukari becomes Yumurasaki, a top-earning oiran (or courtesan) enmeshed in a web of political intrigue, lust, and violence.

Given the complexity of the plot, it’s not surprising that the first volume of Yukarism is a bumpy ride. The tone see-saws between broad physical comedy and brooding melodrama, making it difficult to know if Yukari’s plight is being played for laughs or sniffles. The script, on the other hand, is too pointed; manga-ka Chika Shiomi is so intent on telling us what Yukari is thinking and seeing that she forgets the old dictum about showing, not telling. The same kind of editorial interventions result in at least one character waxing profusely about how handsome and cool Yukari is, just in case we haven’t realized that he’s supposed to be handsome and cool. Now that the basic parameters of the story have been established, however, Shiomi can dispense with the heavy-handed dialogue and do what she does best: write sudsy supernatural romances with beautiful characters in beautiful costumes.

The verdict: Volume two should be a pure guilty pleasure.

These reviews originally appeared at MangaBlog on January 2, 2015.