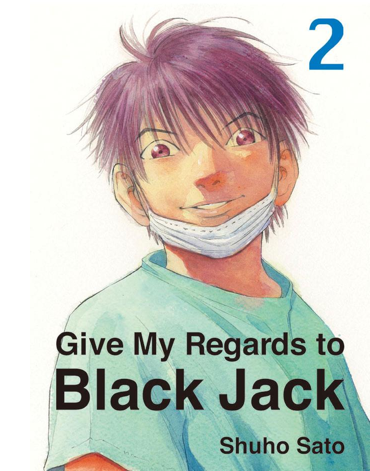 Give My Regards to Black Jack tells a familiar story: a newly-minted professional enters his field, convinced that he has chosen the True Path. He soon discovers, however, that many of his colleagues have chosen profit over passion, forcing him to decide whether to follow their example or fight the system.

Eijiro Saito, the hero, is a graduate of a top medical school, brimming with energy and enthusiasm. Though Saito lands a plum internship at Eiroku University’s teaching hospital, his pay is meager; he supplements his income by moonlighting at a woefully understaffed emergency room. At both institutions, Saito encounters crooked doctors who demand bribes from patients; arrogant doctors who belittle poor patients; and money-minded doctors who care only about the hospital’s bottom line. For all the challenges to Saito’s idealism, however, he clings tenaciously to the belief that candor and sincerity are a doctor’s greatest assets.

As agit-prop, Give My Regards to Black Jack succeeds. Author Shuho Sato makes a convincing case that billing practices encourage Japanese hospitals to treat patients as cash cows, rather than people in need of medical care. Sato also offers a blistering critique of doctor training, showing us the toll that long hours, poor pay, and workplace bullying exact on residents.

As drama, however, Give My Regards to Black Jack is too tidy to be moving. True, Saito’s despair at his own futility seems genuine. Early in volume one, for example, Saito finds himself alone in the operating room with a motorcycle accident victim. Fearful of killing the patient, Saito does nothing; only the last-minute intervention of a more experienced surgeon prevents the victim from dying on the table. In a moment of self-hatred, Saito dissolves into tears, castigating himself for his paralysis — a scene that intuitively and emotionally feels right, given where he is in his residency.

Where the story falters is in its portrayal of the senior doctors at Eiroku Hospital: they’re haughty and deceitful, primarily concerned with asserting their authority over patients and junior staff members. Even when their words ring with truth, their advice is framed as a cynical and self-serving pose. Not all of the doctors fit this mold: the repulsively drawn Ushida, who toils in the Seido emergency room, is a wiser and more compassionate soul than his wolfish face or feral demeanor might suggest. So is Saburo Kita, a maverick heart surgeon who loves karaoke and paisley shirts; Kita cuts a flamboyant figure, but is humble when discussing his work. These characters are few and far between, however, with many more doctors acting like graduates of the Snidely Whiplash School of Medical Malpractice.

The series’ other shortcoming is the artwork. Though Sato shows a Tezukian flair for close-ups of mangled flesh and pulsating organs, his character designs lack Tezuka’s finesse. Tezuka’s Black Jack might be a cartoonish figure with his cloak and Frankensutures, but those design elements are fundamental to establishing Black Jack’s personality; a reader could dive into any Black Jack story and immediately understand who he is. Moreover, all of the characters in Black Jack are crafted with similar care, each assigned a few simple but telling details that communicate their role in the drama.

By contrast, Ushida looks like he stepped out of Toriko, with his bug eyes, lantern-jaw, and perma-sneer. Since none of the other characters are rendered in such a grotesque fashion, one could make the argument that Ushida’s ugliness must serve a dramatic purpose, symbolizing the corrosive effect of his working conditions. We never spend enough time with Ushida, however, to know how much he sacrificed his ideals for a steady career, nor do we see enough of his behavior with patients to rationalize his appearance. It seems perverse to draw only one character in such a distorted fashion; say what you will about Tezuka’s caricatures, but there was always a unifying aesthetic in Black Jack that made it possible for the reader to view Dr. Kiriko, Pinoko, and Biwamaru as inhabitants of the same universe.

What Sato’s work has in common with Tezuka’s is a fierce conviction that the Japanese medical establishment is bloated, ineffective, and indifferent to real human suffering. Sato addresses these shortcomings in a more explicit fashion than Tezuka did in Black Jack — or Ode to Kirihito, for that matter — using real medical procedures and real administrative dilemmas as plot fodder. Yet Sato’s stories are often unmoving, as his hero’s idealism compels him to take simplistic stands on complex issues. Tezuka, on the other hand, focused more on entertaining audiences than on educating them about Japanese health care, building his stories around a character whose subversive, self-interested behavior never prevented him from treating the genuinely deserving. Tezuka’s stories might be more formulaic and absurd than Sato’s, but they’re never so earnestly dull that they read like anti-JMA propaganda. Call me crazy, but I’ll take killer whale surgery and teratoid cystomas over a hectoring medical procedural any day.

GIVE MY REGARDS TO BLACK JACK, VOLS. 1-2 • BY SHUHO SATO • SELF-PUBLISHED (AVAILABLE THROUGH AMAZON’S KINDLE STORE)