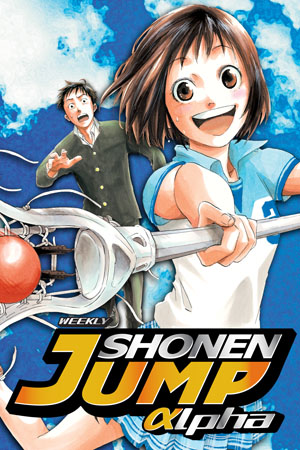 For a series whose plot hinges on a mammary collision, Cross Manage is better than it has any right to be: it’s interesting, funny, and populated with appealing characters who rise above type. The collider and the collidee are, respectively, Sakurai, an aimless second-year student, and Misora, captain of the girls’ lacrosse team. Though Sakurai has joined and quit twelve clubs, he has yet to discover an activity at which he excels; he scoffs at the idea that anyone would play a sport or pursue a hobby simply for enjoyment. Misora is his diametric opposite, an enthusiast who can describe the history of lacrosse in voluminous detail, but can’t make a shot to save her life. When Sakurai accidentally grabs Misora’s chest during an impromptu coaching session, she offers him a choice: become the manager of the girls’ lacrosse team, or risk public humiliation.

Yikes! The “whoops-I-touched-your-boob!” gag is one of the most overused and least amusing “comic” bits in shonen manga, not least because it portrays boys as the victims of mammary collisions, rather than the other way around. I admit that my heart sank a little when I read that scene: surely Kaito could have found a more creative way to set the plot in motion, perhaps one that didn’t scream Love Hina: The Lacrosse Years. But I soldiered on for another chapter, and was pleasantly surprised to discover that Cross Manage wasn’t evolving into a panty-fest or a string of lecherous, Benny Hill-style gags, but an amusing character study of two charmingly screwed-up teens.

Anyone who’s read more than two shonen rom-coms will recognize Sakurai and Misora as familiar types, but artist/author Kaito has invested them with more personality than is called for by the genre. Misora, for example, is a classic Shonen Spaz Dream Girl, but she’s an interesting variation on the type; though she’s utterly incompetent at everything, she’s clearly knowledgeable about lacrosse. She freely admits that she’s terrible, but she doesn’t care because playing the game gives her a sense of accomplishment and purpose.

Sakurai embodies another classic type, the Cool Reader Surrogate. As portrayed in the first two chapters of Cross Manage, Sakurai is a natural at everything — photography, shogi, sports — even though he never practices. Sakurai is a sympathetic character nonetheless, one who’s both moved and puzzled by Misora’s dedication to a sport at which she… well, sucks. And while Misora has a lot to learn from Sakurai about how to handle the stick and pass the ball, Sakurai clearly has a lot to learn from Misora as well — not the least of which is how to enjoy doing things at which he’s not an expert. (Also how to comport himself around girls, of whom he has a deep, unnatural phobia that’s sure to be explained in a future chapter.)

As with many Shonen Jump titles, the artwork is crisp if not terribly distinctive; I’d have a hard time picking Sakurai and Misora out of a line-up of recent Jump characters, though both are memorable enough within the context of the story. Kaito has the artistic chops to populate Cross Manage with a diverse supporting cast — a key skill in a series that promises to have a bumper crop of comic relief characters. Though he hasn’t had many opportunities to showcase this skill just yet, a throwaway scene involving the “prince” of the shogi club hints at Kaito’s ability to establish personality through a few well-chosen details.

If Kaito can steer clear of excessive fanservice, and provide both Sakurai and Misora room for personal growth, I could see myself following Cross Manage; if not, it will join the large pile of shonen romantic comedies that I’ve abandoned after the fifth — or fifteenth — “misunderstanding” involving groping, nudity, or panties. Stay tuned.

3 thoughts on “A First Look at Cross Manage”