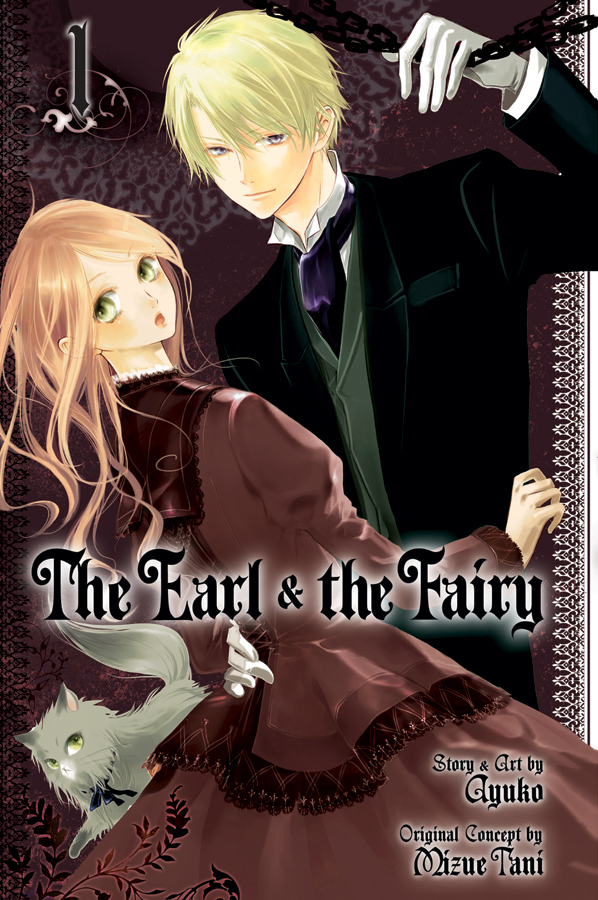 Meet Lydia Carlton: she’s a so-called “fairy doctor,” a healer who acts as an intermediary between the spirit and human worlds. The rapid advance of technology in Victorian England has made Lydia’s job obsolete; most people no longer seek magical remedies for their ailments, and view Lydia as a relic of a less enlightened time, someone who steadfastly clings to the belief that she can see and talk to these mischievous folk. Lydia knows better: not only are fairies real, but they continue to wreak havoc with humans, even in an age of railroads, telegraphs, and steam-powered ships.

Lydia’s predicament would make a swell basis for a manga, but her abilities are more a plot contrivance than a central element of the drama — at least in volume one of The Earl & The Fairy. The initial chapters focus on Lydia’s fraught relationship with Edgar Ashenbert, a dashing young man who claims to be descended from the Blue Knight, a legendary warrior. Edgar kidnaps Lydia because he needs someone to help him find the Blue Knight’s sword, the location of which is inscribed on a coin that can only be read by a fairy doctor.

If you’ve read more than five or six shojo manga — or, for that matter, five or six Harlequin romances — you can guess what sort of chap Edgar is: he’s handsome, possessive, and smug, with a tender side that the heroine’s beauty and decency helps reveal. Lydia is a similarly predictable character: she’s feisty and conflicted, simultaneously drawn to and repelled by her captor. Lydia also happens to be one of the duller knives in the Shojo Beat drawer, placing her trust in anyone who approaches her; she’s kidnapped not once but twice in the very first chapter of the story.

For a grumpy old lady like me, stale, silly lead characters would usually be a deal-breaker. The lively supporting cast and lovely artwork, however, drew me into the story, even when Edgar and Lydia’s conversations inspired eyeball rolling and hair pulling. (In later chapters, Edgar narrates his tortured personal history in comic detail — it’s courtship by information dump.)

The best character in The Earl & The Fairy — so far, at least — is Nico, a magical being who assumes the form of a fussy talking cat. On one level, Nico is a standard animal sidekick, providing much-needed comic relief: in one running joke, for example, he bristles with indignation every time he’s served a bowl of milk. (He prefers wine.) On another level, however, Nico is a reader stand-in, giving voice to our frustration with Lydia’s naivete; in essence, it’s like watching a horror movie in which one of the characters says, “Don’t open that door, dude, the killer’s in there.” You don’t say.

Ermine and Raven, a sister-brother duo in Edgar’s employ, also add depth to the cast. Their backstory is pure manga: both were enslaved by a wicked “prince” working out of the sewers of an unnamed American city. After Edgar rescued them, Ermine and Raven became his most devoted servants, waiting on him hand and foot, defending him against enemies, and wooing Lydia on his behalf. To be sure, henchmen/servants are a standard manga type, but Ermine and Raven have enough idiosyncrasies to make them interesting; Ermine, in particular, is an unusual figure, a melancholy cross-dresser who seems caught between the male and female worlds.

The Earl & The Fairy‘s other saving grace is the artwork. The character designs are crisply executed; though none of the characters are especially distinguished looking, artist Ayuko draws elegant, well-proportioned figures that are pleasing to the eye. The settings are rendered with even greater care, capturing the technology and landscapes of mid-nineteenth century England in convincing detail. (Well, minus the ships: when viewed from a distance, they appear to be eighteenth-century sailing vessels, while their interiors suggest a Cunard ocean liner.) Ayuko pays similar attention to lighting; in several nocturnal scenes, she does a fine job of suggesting the meager, irregular quality of candlelight, using delicate crosshatching to mark the boundary between light and shadow.

If the parts of Earl are greater than the whole, it’s still an entertaining series. I don’t know if moody landscapes and talking cats are enough to justify my investment in all four volumes, but I’m certainly willing to read another before declaring this nice-looking romance a dud.