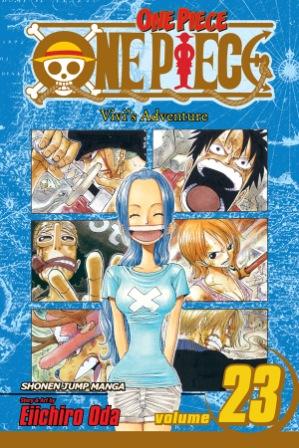 Why would any sane person commit to reading a series that’s still going strong after sixty volumes? I can think of three compelling reasons why you should set aside your shonophobia — that’s Latin for “fear of incredibly long series with interminable fight scenes and characters who do their best” — and give Eiichiro Oda’s One Piece a shot.

Though many shonen manga-ka love to populate their stories with flamboyantly ugly villains, Eiichiro Oda’s character designs are more memorable than his competitors’. That’s because Oda doesn’t just add a few scars and a crazy hairdo to distinguish the bad guys from the good; he creates every villain from scratch, making each garment, prop, tattoo, wart, and weapon a direct reflection of the character’s personality and personal history. The same goes for other supporting players: Oda emphasizes the greenness of one pirate’s kiddie followers by giving them vegetal hairdos, and the isolation of a pirate castaway by stuffing the character’s body into an empty treasure chest, with only Gaimon’s unkempt hair and feet poking out. (Gaimon gets one of the series’ best lines: “I used to have two eyebrows!” he exclaims, musing on his twenty years stranded on a remote island.)

Oda’s entire approach to drafting shows a similar thoughtfulness: his pirate ships, tropical islands, and sea coast villages are rendered in clean lines, with a minimum of screen tone. Oda relies instead on playful shapes to help set the stage, from a sea-going restaurant that looks like a cross between a carp and a Hong Kong dim sum parlor, to an island populated by rabbit-cobras, pig-lions, and rooster-foxes.

The only blind spot in Oda’s artwork is his female characters. Though he can draw a marvelous, gnarled pirate queen, as gloriously repulsive as any of the series’ other villains, his young, attractive girls are blandly interchangeable. Even as more female characters are introduced in later story arcs, their appearance seems more calculated to satisfy the male gaze than reveal much about their personality — besides, of course, the near-universal tendency among shonen artists to make a girl’s bust- and neckline a reliable predictor of her villainy.

2. THE LOVING SEND-UPS OF SHONEN CLICHES

One of the reasons I don’t read more shonen manga: I find the characters’ compulsion to shout the name of their fighting techniques kind of silly. (OK, a lot silly.) If anything, it brings back memories of the old Super Friends TV show in which the Wonder Twins clinked rings and announced that they’d be taking “the form of an ice sled!” or “the form of a green-striped tiger!” (If that was meant to be comedy and not a complete abdication of imagination on the writer’s part, I missed it.) Granted, InuYasha and Naruto boast cooler-sounding and more effectual powers, but the minute InuYasha yells “Wind Scar!”, I’m ripped out of the scene, pondering the need for such verbal displays.

In One Piece, however, Oda pokes fun at the practice by assigning his characters goofy powers with goofy names that are fun to say. Monkey D. Luffy’s Gum-Gum attacks are the most frequent and obvious example, as he pretzels himself into a Looney Tunes assortment of weapons and shields, but his crew mates also have a few tricks up their sleeves. The best of them, by far, is Tony Tony Chopper, a blue-nosed reindeer who also happens to be the ship’s doctor. His Human-Human powers enable him to assume a variety of forms, including a gargantuan were-reindeer that wouldn’t be out of place in the pages of Lycanthrope Leo.

Oda also walks a fine line between openly mocking his hero and using him to exemplify the “friendship, effort, and victory” motto that undergirds every Shonen Jump title. Monkey is, to put it nicely, one of the dumbest shonen heroes in the canon — and that’s part of his charm. Unlike, say, Naruto or Lag Seeing (of Tegami Bachi fame), Monkey’s single-minded pursuit of treasure is portrayed as a kind of insanity, not a sign of a stellar character. Monkey goes to extreme lengths to prove himself — not unusual for a shonen hero — but his behavior is clearly meant to be ridiculous. (In the very first pages of the series, he stabs himself in the face with a knife to demonstrate his imperviousness to pain, much to the horror of the assembled pirates.) Yet for all his ill-advised bravado, he’s a kind-hearted goof; anyone who demonstrates valor or integrity is invited to join his crew, regardless of the original circumstances under which they met Monkey. Again, those qualities don’t make Monkey unique, but they do make him appealing; he’s an indestructible hero who’s utterly fallible.

Any text as thick with puns and pirate-speak as One Piece runs the risk of falling flat in translation, but the English-language adaptation is fluid, funny, and eminently readable. I can’t gauge how faithfully the VIZ edition adheres to the original Japanese, but the script’s buoyant, goofy tone complements the artwork perfectly, leading me to think that VIZ’s editorial team has given American audiences a reasonable approximation of the Japanese-language reading experience. Heck, they’ve even made Oda’s reader correspondence sound like a real, mischievous person answered those fan letters. Now that’s a good adaptation.

19 thoughts on “3 Reasons to Read One Piece”