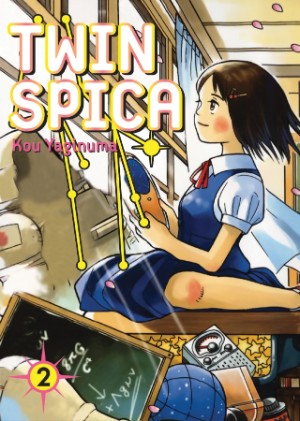 For all the upheaval within the manga industry — the demise of CMX, Del Rey, and Go! Comi, the layoffs at VIZ — 2010 proved an exceptionally good year for storytelling. True, titles like Black Butler, Naruto, and Nabari no Ou dominated sales charts, but publishers made a concerted effort to woo grown-ups with vintage manga — Black Blizzard, A Drunken Dream and Other Stories — edgy sci-fi — Biomega, 7 Billion Needles — underground comix — AX: A Collection of Alternative Manga, The Box Man — and good old-fashioned drama — All My Darling Daughters, Bunny Drop. I had a hard time limiting myself to just ten titles this year, so I’ve borrowed a few categories from my former PCS cohort Erin Finnegan, from Best New Guilty Pleasure to Best Manga You Thought You’d Hate. Please feel free to add your own thoughts: what titles did I unjustly omit? What titles did I like but you didn’t? Inquiring minds want to know!

In this sometimes funny, sometimes melancholy coming-of-age story, a family tragedy brings teenager Ko Kitamura closer to neighbor Aoba Tsukishima, with whom he has a fraught relationship. Though the two bicker with the antagonistic gusto of Beatrice and Benedict, their shared love of baseball helps smooth the course of their budding romance. To be sure, Cross Game can’t escape a certain amount of sports-manga cliche, but Mitsuri Adachi is more interested in showing us how the characters relate to each other than in celebrating their amazing baseball skills. (Not that he skimps on the game play; Adachi clearly knows his way around the diamond.) The result is an agreeable dramedy that has the rhythm of a good situation comedy and the emotional depth of a well-crafted YA novel, with just enough shop-talk to win over baseball enthusiasts, too.

The next time someone dismisses manga as a “style” characterized by youthful-looking, big-eyed characters with button noses, I’m going to hand them a copy of AX, a rude, gleeful, and sometimes disturbing rebuke to the homogenized artwork and storylines found in mainstream manga publications. No one will confuse AX for Young Jump or even Big Comic Spirits; the stories in AX run the gamut from the grotesquely detailed to the playfully abstract, often flaunting their ugliness with the cheerful insistence of a ten-year-old boy waving a dead animal at squeamish classmates. Nor will anyone confuse Yoshihiro Tatsumi or Einosuke’s outlook with the humanism of Osamu Tezuka or Keiji Nakazawa; the stories in AX revel in the darker side of human nature, the part of us that’s fascinated with pain, death, sex, and bodily functions. Like all anthologies, the collection is somewhat uneven, with a few too many scatological tales for its own good, but the very best stories — “The Hare and the Tortoise,” “Push Pin Woman,” “Six Paths of Wealth,” “Puppy Love,” “Inside the Gourd” — attest to the diversity of talent contributing to this seminal manga magazine. —Reviewed at The Manga Critic on 5/21/10

If you’ve ever lived with a cat or dog, you know that no meal is complete without a pet hair garnish. Now imagine that your beloved companion actually prepared your meals instead of watching you eat them: what sort of unimaginable horrors might you encounter beyond the stray hair? That’s the starting point for Neko Ramen, a 4-koma manga about a cat whose big dream is to run a noodle shop, but author Kenji Sonishi quickly moves past hair balls and litter box jokes to mine a richer vein of humor, poking fun at his cat cook’s delusions of entrepreneurial grandeur. Taisho is the Don Quixote of ramen vendors, dreaming up ludicrous giveaways and unappetizing dishes in an effort to promote his business, never realizing that he is the store’s real selling point. The loose, sketchy artwork gives the series an improvisational feel, while the script has the pleasant, absurdist zing of an Abbott and Costello routine. —Reviewed at The Manga Critic on 6/2/10

Combining the psychological realism of Dostoevsky with the social consciousness of Tolstoy and Zola, Osamu Tezuka uses conflicts within the once-powerful Tenge clan to dramatize the social, political, and economic upheaval caused by the American occupation of post-war Japan. No subject is off-limits for Tezuka: the Tenge commit murders, spy for the Americans, join the Communist Party, imprison a family member in an underground cell, and engage in incest. It’s one of Tezuka’s most sober and damning stories, at once tremendously powerful and seriously disturbing, with none of the cartoonish excess of Ode to Kirihito or MW. The ending is perhaps too pat and loaded with symbolism for its own good, but like Tezuka’s best work, Ayako forces the reader to confront the darkest, most corruptible corners of the human soul. As with Apollo’s Song, Black Jack, and Buddha, Vertical has done a superb job of making Tezuka accessible to Western readers with flipped artwork and a fluid translation.

Stop me if you’ve heard this one before: a thirty-something bachelor unexpectedly becomes a parent to a cute little girl, leading to hijinks, misunderstandings, and heart-tugging moments. That’s a fair summary of what happens in Bunny Drop, but Yumi Unita wisely avoids the pitfalls of the single-dad genre — the cheap sentiment, the unfunny scenes of dad recoiling in horror at diapers, runny noses, and tears — instead focusing on the unique bond between Daikichi and Rin, the six-year-old whom he impetuously adopts after the rest of the family disavows her. (Rin is the product of a liaison between Daikichi’s grandfather and a much younger woman.) Though Daikichi struggles to find day care, buy clothes for Rin, and make sense of her standoffish behavior, he isn’t a buffoon or a straight man for Rin’s antics; Unita portrays him as a smart, sensitive person blessed with good instincts and common sense. Clean, expressive artwork and true-to-life dialogue further inoculate Bunny Drop against a terminal case of sitcom cuteness, making it one of the most thoughtful, moving, and adult manga of the year.

Written in just twenty days, this feverish pulp thriller plays like a mash-up of The Fugitive, The 39 Steps, and The Defiant Ones as two convicts — one a hardened criminal, the other a down-on-his luck musician — go on the lam during a blinding snowstorm. The heroes are more archetypes than characters, drawn in bold strokes, but the interaction between them crackles with antagonistic energy; they’re as much enemies as partners, roles that they constantly renegotiate during their escape. Evocative artwork — slashing lines, dramatic camera angles, images of speeding trains — infuses Black Blizzard with a raw, nervous energy that nicely mirrors the characters’ internal state. Only in the final, rushed pages does manga-ka Yoshihiro Tatsumi falter, tidily resolving the story through an all-too-convenient plot twist that hinges on coincidence. Still, that’s a minor criticism of a thoroughly entertaining story written during a crucial stage of Tatsumi’s artistic development. —Reviewed at The Manga Critic on 9/9/10

Timid ronin Akitsu Masanosuke can’t hold a steady job, despite his formidable swordsmanship. When a businessman approaches him with work, Masanosuke readily accepts, not realizing that his new employer, Yaichi, runs a crime syndicate that specializes in kidnapping. Masanosuke’s unwitting participation in a blackmailing scheme prevents him from severing his ties to Yaichi; Masanosuke must then decide if he will join the House of Five Leaves or bide his time until he can escape. Though Toshiro Mifune and Hiroyuki Sanada have made entire careers out of playing characters like Masanosuke, Natsume Ono makes a persuasive case that you don’t need a flesh-and-blood actor to tell this kind of story with heartbreaking intensity; she can do the slow-burn on the printed page with the same skill as Masaki Kobayashi (Hara Kiri, Samurai Rebellion) and Yoji Yamada (The Twilight Samurai) did on the big screen. —Reviewed at The Manga Critic on 8/20/10

Asumi Kamogawa is a small girl with a big dream: to be an astronaut on Japan’s first manned space flight. Though she passes the entrance exam for Tokyo Space School, she faces several additional hurdles to realizing her goal, from her child-like stature — she’s thirteen going on eight — to a faculty member who blames her father for causing a fiery rocket crash that claimed hundreds of civilian lives. Yet for all the setbacks she’s experienced, Asumi proves resilient, a gentle girl who perseveres in difficult situations, offers friendship in lieu of judgment, and demonstrates a preternatural awareness of life’s fragility. Twin Spica follows Asumi through every stage of training, from physics lectures to zero-G simulations, showing us how she befriends her fellow cadets and gradually learns to rely on herself, rather than her imaginary friend, Mr. Lion. Though Twin Spica was serialized in a seinen magazine, it works surprisingly well for young adults, too, an all-too-rare example of a direct, heartfelt story that’s neither saccharine nor mawkish.  —Reviewed at The Manga Critic on 5/3/10

The five vignettes in All My Darling Daughters depict women negotiating difficult personal relationships: a daughter confronts her mother about mom’s new, much younger husband; a college student seduces her professor, only to dump him when he tries to court her properly; a beautiful young woman contemplates an arranged marriage. Like all of Yoshinaga’s work, the characters in All My Darling Daughters love to talk. That chattiness isn’t always an asset to Yoshinaga’s storytelling (see Gerard and Jacques), but here the dialogue is perfectly calibrated to reveal just how complex and ambivalent these relationships really are. Yoshinaga’s artwork is understated but effective, as she uses small details — how a character stands or carries her shoulders — to offer a more complete and nuanced portrait of each woman. Quite possibly my favorite work by Yoshinaga. 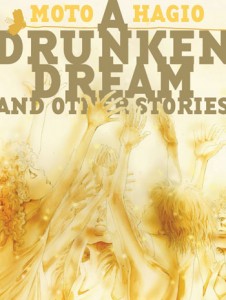 1. A DRUNKEN DREAM AND OTHER STORIES (Moto Hagio; Fantagraphics)

Not coincidentally, A Drunken Dream and Other Stories was my nomination for Best New Graphic Novel of 2010 as well. Here’s what I had to say about the title over at Flashlight Worthy Books:

Moto Hagio is to shojo manga what Will Eisner is to American comics, a seminal creator whose distinctive style and sensibility profoundly changed the medium. Though Hagio has been actively publishing stories since the late 1960s, very little of her work has been translated into English. A Drunken Dream, published by Fantagraphics, is an excellent corrective — a handsomely produced, meticulously edited collection of Hagio’s short stories that span her career from 1970 to 2007. Readers new to Hagio’s work will appreciate the inclusion of two contextual essays by manga scholar Matt Thorn, one an introduction to Hagio and her peers, the other an interview with Hagio. What emerges is a portrait of a gifted artist who draws inspiration from many sources: Osamu Tezuka and Shotaro Ishimonori, Ray Bradbury and Isaac Asimov, Frances Hodgson Burnett and L.M. Montgomery.

Done because there are too menny… great manga, that is, to confine myself to a traditional top ten list. With apologies to Thomas Hardy, here are some of the other titles that tickled my fancy in 2010: