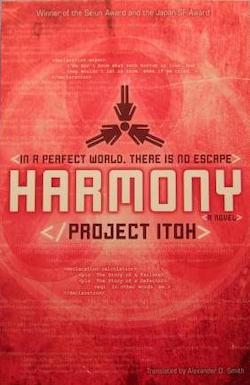 VIZ launched its Haikasoru imprint in 2009, with the goal of bringing Japan’s best speculative fiction to the US. Haikasoru’s debut titles — All You Need Is Kill and The Lord of the Sands of Time — introduced Americans to two award-winning sci-fi authors whose work had previously been unavailable in English. As the line as grown, so, too, has the diversity of its offerings, which run the gamut from horror (e.g. Otsuichi’s ZOO) to teen-friendly fantasy (e.g. Miyuki Miyabe’s Brave Story and The Book of Heroes) to science fiction (e.g. Issui Ogawa’s The Next Continent and Hosume Nojia’s Usurper of the Sun). Harmony, the newest Haikasoru title, falls on the softer end of the sci-fi continuum, depicting a world in which “admedistrative” societies — that is, countries that operate by rule of medicine, rather than rule of law — are the new empire-builders.

Harmony takes place in the late twenty-first century, fifty years after nuclear holocaust destroyed North America and destabilized the international balance of power by flooding the Third World with an abundant supply of nuclear weapons. In the chaos that ensued, countries which successfully developed the medical technology to treat radiation sickness supplanted the old superpowers, while less scientifically advanced nations descended into guerilla warfare. The new admedistrative powers transformed the World Health Organization (WHO) into a global peacekeeping force tasked with monitoring other nations’ ability to “ensure their populace a lifestyle that [is] sufficiently healthy and human.” The key to that lifestyle is WatchMe, an elaborate system that keeps close watch over individuals’ health, guiding them away from potentially harmful choices — fatty food, alcohol, cigarettes, distressing literature — repairing cellular damage, and providing the government a steady stream of data about a person’s behavior and current medical condition.

Harmony is told through the point of view of Tuan Kirie, a twenty-eight-year-old WHO agent tasked with solving the mystery behind an “outbreak” of suicide — an action that, in theory, should be impossible under the WatchMe system. Tuan is an appealing narrator, at once tough and funny, a natural contrarian who smokes and drinks and defies authority yet nonetheless treats her mission with the utmost seriousness. The story moves fluidly between past and present, using Tuan’s childhood memories to shed light on her conflicted, often subversive, behavior. Until the third act, the pacing is brisk and the dialogue crisp; as Tuan draws closer to finding out what prompted the wave of suicides, however, the story begins to sag under the weight of turgid conversations about free will and psychology, a flaw that the frequent changes of setting can’t conceal.

It’s a shame these third-act discussions are so pedestrian, as author Keikaku “Project” Itoh has devised a nifty set-up for examining the boundaries between public and private life, imagining a world in which the government’s desire to collect data and enforce civility goes well beyond speech, belief, and association — all manifestations of conscious thought — to the level of neural transmissions and body chemistry. For most of the book, Itoh manages to dramatize the conflict between public and private without speechifying or shortcuts, using Tuan’s role as a WHO agent to explore the nature of admedistrative rule. Though Tuan yearns for the physical and social freedom less technologically advanced societies enjoy, the persistence of armed conflict in the developing world is a potent reminder of why so many people willingly submit to the benevolent totalitarianism of the WatchMe system.

VIZ has done an excellent job of adapting Harmony for English-speaking audiences. Translator Alexander O. Smith, in particular, deserves praise for the smooth, idiomatic voicing of Tuan’s thoughts in language that captures the heroine’s fierce personality. Smith also navigates passages of scientific shoptalk and historical description with ease, producing a highly readable text that lacks any of the tell-tale signs of translation: awkward turns of phrase, confusing use of pronouns.

Aside from a few third-act hiccups, Harmony is a solidly entertaining book, offering a judicious mixture of globe-trotting action, social commentary, and suspense to engage all but the hardest science fiction fans, and a surprise ending that neatly resolves the main plot while raising new, thought-provoking questions. Recommended.