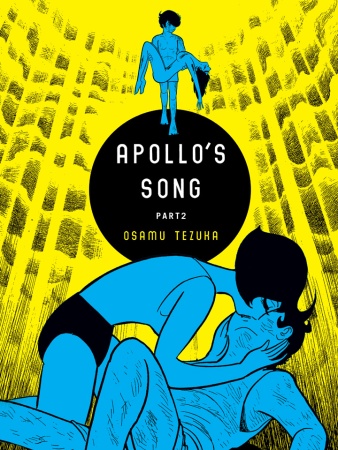 Apollo’s Song may be one of the strangest sex ed manuals ever written. It begins with a textbook Tezuka scene, at once lyrical and goofy: millions of anthropomorphic sperm race towards a comely egg. After one lucky soul pants and claws his way to the front of the scrum, the sperm and egg dissolve into a passionate embrace. In the following panel, we see the result of their union, an embryo, presiding over a veritable sperm graveyard. This juxtaposition of life and death — or, perhaps more accurately, sex and death — foreshadows the dialectic that will play out in the following chapters.

We are then introduced to Shogo, a young man who has just arrived at a psychiatric hospital. Shogo is a sociopath: unemotional, cruel to animals, scornful of society, and deeply misogynist. While undergoing electroshock therapy, Shogo has a vivid hallucination in which a stern goddess chastises him for renouncing all forms of love. As punishment for his cruelty, she condemns him to a fate straight out of Dante’s Inferno: Shogo will love and lose the same woman over and over again for eternity. Thus begins a series of romantic and sexual encounters between Shogo and various incarnations of his ill-fated partner.

Though the story begins and ends in the present day, the individual episodes unfold in both the past and future, reminding the reader that Shogo cannot escape his fate. Certain recurring motifs suggest that these scenarios are, in fact, manifestations of Shogo’s subconscious as he struggles to reconcile his hatred of women with his need to be loved. In each scenario, for example, Shogo adopts a hyper-masculine guise — Nazi foot soldier, fugitive, hunter, terrorist — that he must ultimately renounce in his quest for spiritual and sexual fulfillment. We’re never entirely certain which of these episodes are unfolding in Shogo’s mind and which, if any, are unfolding in the real world. 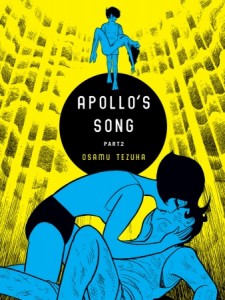 Though Apollo’s Song aspires to universality, Tezuka’s characters remain firmly rooted in the time and place of their creation. Tezuka blames Shogo’s mother — whose crimes include an inability to lactate, promiscuity, and emotional detachment — for her son’s pathology, even treating us to a scene of the youthful Shogo walking in on his mother and a lover. While no one would deny the deleterious effects of parental neglect, Shogo’s mother seems less like a character than a casebook study out of the 1952 DSM. Other characters, such as an “artsy-fartsy,” “self-centered” career woman who defends her chastity with hysterical fury, seem like the morbidly sexual figments of a Freudian imagination.

Tezuka’s moralizing, too, has a curiously alienating effect. In the first episode, for example, Shogo imagines that he is a German soldier aboard a train bound for an unnamed concentration camp. Through the slats of a cattle car, he spots Elise, whose beauty and modesty awakens his sense of moral outrage. He rescues her first from the wreckage of the train (which is bombed by Allied forces), then from German rapists, earning her love through his selflessness. This scenario is clearly meant to teach readers that love can transcend ethnic, racial, and religious divisions, yet this epiphany is of a shallow nature, as Shogo fails to grasp the true horror of the situation or appreciate Elise’s grief at losing her entire family – in essence, the Holocaust has been reduced to a colorful backdrop for yet another of Shogo’s doomed romances.

However problematic the story may be, the artwork in Apollo’s Song ranks among Tezuka’s best, filled with arresting landscapes and surprisingly carnal imagery. In chapter two, for example, Shogo finds himself stranded on a lush tropical island. Peering through a dense frame of vegetation, he spies a secluded glen where deer, panthers, and leopards embrace their mates in sexual congress. The sensuality of the moment is accentuated by their bodies’ curved lines and beatific expressions, infusing a potentially silly scene with a graceful spirituality. Later chapters also abound in vivid images; as Tezuka imagines the Tokyo of the future, the city has been transformed from a glass-and-concrete forest into an Art Deco monstrosity reminiscent of Fritz Lang’s Metropolis or a Soviet Bloc city. Its inhabitants, a race of sexless, synthetic beings that store their faces in jars, preside over a haunted landscape of tombs, forgotten infrastructure, and empty plazas; the very barrenness of the place brings the intensity of Shogo’s yearning and anger into sharp relief.

Revisiting Apollo’s Song three years after its initial release, I find myself torn. On the one hand, Tezuka’s artwork is a feast for the eyes, featuring some of the most erotic images he committed to paper. On the other hand, it’s a deeply flawed work that, in its attitudes towards women and finger-wagging tone, shows its age. Vertical has done an admirable job of fashioning a silk purse from a sow’s ear with the handsomely produced new edition, but even the knockout cover designs can’t conceal the fact that Apollo’s Song is a sour, heavy-handed tale that lacks the essential humanism – and humor – of Buddha and Phoenix.

This is a revised version of a review that appeared at PopCultureShock on 6/22/2007.