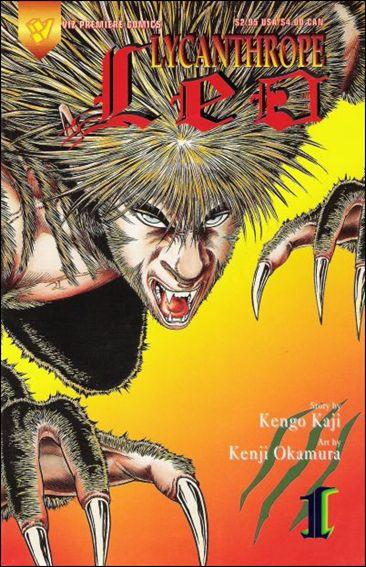 Back in the 1980s and 1990s, before publishers realized that they could sell manga to teenagers through Borders and Books-A-Million, VIZ and Dark Horse actively courted the comic-store crowd with blood, bullets, and boobs. It was a golden age for manly-man manga — think Crying Freeman and Hotel Harbor View — but it was also a period in which publishers licensed some bad stuff. And when I say “bad stuff,” I mean it: I’m talking ham-fisted dialogue, eyeball-bending artwork, and kooky storylines that defy logic. Lycanthrope Leo (1997), an oddity from the VIZ catalog, is one such manga, a horror story with a plot that might best be described as Teen Wolf meets The Island of Dr. Moreau with a dash of WTF?!

The Leo of the title is Leo Takizawa, a high school student with a cute girlfriend and a gruff father. In the days leading up to his seventeenth birthday, he surprises his track teammates with an astonishing, world-record performance in the hundred-meter dash. Dad, noticing Leo’s dramatic transformation from speedy string-bean to Carl Lewis challenger, realizes that his worst fear is coming true: Leo is on the verge of turning into a lycanthrope, a powerful shape-shifter capable of rending a man limb from limb. So Dad does what all caring, self-respecting parents in his situation would do: he lures his son into an abandoned cabin in the woods, then attempts to shoot him with a fancy crossbow — but not before he gives a long, impassioned speech explaining what Leo is and why lycanthropes are mankind’s avowed enemy. Dad’s garrulousness proves his undoing; like so many villains, he spends too much time delivering an expository monologue and not enough time getting down to business, thus providing Leo opportunity to assume his true form and take Dad out with one blow of his werelion’s paw.

Yes, you read that right: Leo is a werelion. I admit the idea has potential; it liberates the author Kengo Kaji from the conventions of Western were-lore — the silver bullets and full moons and gypsies — while allowing him to milk the human/animal dichotomy for its full dramatic potential. Alas, Kaji extends the were-concept to other, less majestic animals for a subplot involving a centuries-old conflict between carnivore and herbivore lycanthropes. (The meat-eaters favor wiping out mankind; the cud-chewers prefer peaceable co-existence.) The nadir of the anything-is-more-awesome-in-were-form, however, is Mayuko Asuka, a sexy young teacher who turns out to be… a were-flying squirrel. And an evil were-flying squirrel, I might add, one who isn’t above seducing a seventeen-year-old or attacking a lycanthrope who threatens to reveal too much of the carnivores’ world-domination plans.

Kenji Okamura’s artwork is awe-inspiring and awful simultaneously. On the one hand, he draws amazingly detailed monsters, rendering their fur and claws and muscle-bound chests with exquisite care, even when they’re ripping each other to pieces; imagine Sylvester Stallone in werewolf drag, and you have some idea of what the male lycanthropes look like in their animal forms. On the other hand, Okamura’s human characters look like they belong in a Fernand Léger painting, with their plastic, impassive faces. Okamura struggles to convey emotion convincingly; about the best he can do is depict Leo sweating profusely. (By my count, Leo loses twenty to thirty pounds of water weight over the course of the first volume.) Worse still, Okamura frames almost every scene from an odd vantage point that distorts the characters’ anatomy, making them look ridiculously stumpy or leggy; I honestly thought Leo was being bullied by a midget in several scenes, thanks to the extreme angle at which we view Leo’s tormentor.

If you’re wondering why you haven’t heard more about Lycanthrope Leo, that’s because VIZ suspended production on the series after just one volume, citing poor sales. It’s not hard to imagine why Leo didn’t connect with American readers; the art has a throwback-to-the-eighties look, while the story is so preposterous and self-serious that it doesn’t work as straight horror or camp. From a reader’s standpoint, the most disappointing thing about Leo is the abruptness with which the English edition ends; Kaji introduces a key character in the final chapters of volume one, leaving readers to wonder whether the carnivores and herbivores eventually achieve detente. Of course, you probably won’t care if they do, considering all the sweaty, frantic silliness that precedes the introduction of the wise were-buffalo; for all the howling and “unsheathing of steel claws,” Lycanthrope Leo is about as scary as a kitten.