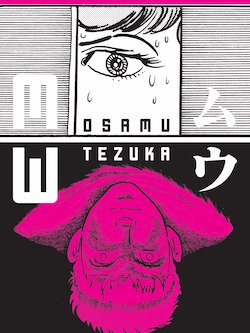 Invoke Tezuka’s name, and most readers immediately think of Astro Boy, Buddha, and Princess Knight. But there’s a darker side to Tezuka’s oeuvre that dates back to 1953, the year in which he brought Dostoevsky’s tormented Raskolnikov to life in a manga-fied version of Crime and Punishment. It’s this side of Tezuka — the side that acknowledges the human capacity for violence, greed, and deception — that’s on display in MW, a twisty thriller about a sociopath and the priest who loves him.

The central event of MW is a military cover-up. “Nation X,” which maintains a base on Okinawa Mafune, has been stockpiling a top-secret chemical weapon known as MW.1 An explosion releases a poisonous cloud, killing everyone on the island except for two visitors, Iwao Garai and Michio Yuki. Though Garai and Yuki are equally traumatized by this holocaust, their lives diverge wildly over the next fifteen years. Garai embraces the light, becoming a Roman Catholic priest, while Yuki embraces the darkness, embarking on a spree of kidnappings, murders, and extortion schemes meant to punish the politicians, businessmen, and military officials who profited from the subsequent cover-up.

Superficially, Yuki’s plans might be understood as an eye for an eye, but Yuki is no righteous avenger. He’s a serial killer who relishes torturing his victims, who exploits the secrecy of the confessional to torment Garai with details of his crimes, who uses his androgynous sex appeal to seduce both men and women, and who impersonates his female victims with the skill of a kabuki actor. (And just in case we haven’t yet grasped the true extent of Yuki’s depravity, Tezuka suggests that Yuki has a rather intimate bond with his dog Tomoe.) Even Yuki’s motivation for exposing the MW scandal is purely selfish: Yuki is dying from its lingering effects, and wishes to take millions of people with him to the grave. Though Father Garai hopes to redeem Yuki, he lacks Yuki’s certitude, instead violating his priestly vows — especially that pesky oath of celibacy — as he tries to prevent Yuki from harming anyone else.

MW can certainly be enjoyed as a potboiler. Tezuka spins an entertaining, slightly preposterous yarn, serving up more plot twists, car chases, and gender-bending costume changes than Dressed to Kill and The Manchurian Candidate combined. But it’s also very talky. Characters frequently describe their plans at length instead of just carrying them out; voice-overs interrupt the action to educate us on the history of chemical warfare; and thought balloons reveal little about the interior lives of the characters that couldn’t be inferred from their actions.

MW can be more profitably understood as a meditation on US-Japanese relations during the Vietnam War. The gas attack takes place around 1960, the year the Japanese Diet ratified the Treaty of Mutual Cooperation and Security2, while most of the action takes place in the 1970s, as left-wing student groups were taking to the streets to protest American military presence in Japan. Though MW does include a few demonstrations, Tezuka doesn’t try to dramatize the left wing’s activities so much as the spirit of the movement: “Debunk false democracy!” The politicians in MW are greedy, foolish, and entirely too cozy with “Nation X” military brass. Yet the student radicals don’t fare so well, either; Tezuka renders them as an ineffectual lot whose agenda is riddled with inconsistencies. Only in the ambivalent Father Garai, who desperately wishes to enlighten the public about MW, does Tezuka present a decent, sympathetic figure, someone struggling mightily against hypocrisy and deceit, even as he succumbs to his own sexual demons.

Of course, there’s another level on which MW can be appreciated as well: the artwork. MW is Tezuka at his most restrained; there are no doe-eyed critters, no slapstick, no characters breaking the fourth wall to crack wise about cartooning conventions. (To be sure, there are moments of playfulness: in one memorable sequence, reminiscent of the grand parade in Cleopatra, Yuki impersonates the great gorgons of Aubrey Beardsley’s work, from Salome to the Lady in the Peacock Skirt.) Most of the pages have a surprisingly direct, clean presentation, a neat and orderly progression of squares and rectangles that run in counterpoint to the orgies, bank robberies, high-speed boat chases, and fist-fights they contain. From time to time, however, Tezuka thinks outside the grid, with dramatic results. When Gari and Yuki find themselves on Okinawa Mafune, for example, Tezuka doesn’t depict the actual gas attack. Instead, Tezuka shows us only what Garai and Yuki see after the cloud has dissipated: a mosaic of faces, each contorted into a grotesque death-mask. It’s a potent, haunting moment that suggests both the survivors’ horror upon discovering the bodies and the victims’ excruciatingly painful deaths.

As with all of Tezuka’s works, MW is sprinkled with characters and scenes that may make contemporary readers uncomfortable. The women of MW, for example, are either passive victims — one is rendered an emotional and physical invalid after Yuki rapes her — or venal shrews, with only a brief appearance by a sane lesbian newspaper editor to balance the parade of unflattering female stereotypes. Tezuka’s depiction of homosexuality is similarly frustrating. On the one hand, the newspaper editor refuses to embarrass Garai by outing him in the press, telling him that “gay love is accepted outside Japan”; on the other hand, Garai’s relationship with Yuki has a strong whiff of pedophilia — at least in the opening pages — as Garai is an adult and Yuki a boy at the time of their first encounter. Similar issues dog Apollo’s Song and Swallowing the Earth, yet in MW, Tezuka’s decision to focus exclusively on the problems of Japanese society prevents the story from spinning out of control or sinking under the weight of a few ill-informed portrayals.

Fans of Apollo’s Song, Buddha, and Ode to Kirihito won’t be surprised to learn that Vertical has done a fine job of showcasing Tezuka’s work with a crisp translation, quality binding, and signature Chip Kidd dustjacket. MW won’t be everyone’s cup of tea, but if the thought of Tezuka channeling Brian DePalma and John Frankenheimer sounds appealing, you’ll want to add it to your library.

1 MW is pronounced “moo.”
2 The treaty reaffirmed the US military’s commitment to defending Japan against hostile forces, pledged to return captured territories, and extended the US occupation of Okinawa for an additional ten years.

This is a revised version of a review that appeared at PopCultureShock on October 29, 2007. Click here for the original text.