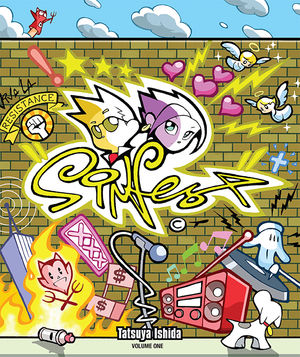 The very first Sinfest strips tell you everything you need to know about Tatsuya Ishida’s cheeky yet surprisingly reverential comic. In them, we see a young man seated at a table across from the Devil, negotiating a contract that would enable him to enjoy — among other perks — a “supermodel sandwich” in exchange for his soul. The transaction isn’t taking place in an office or the gates of Hell, however, but, in a hat tip to Charles Schulz, at a jerry-rigged booth that’s a shoo-in for the one Lucy van Pelt used to dispense nickel-sized bits of wisdom to the Peanuts gang.

It’s this mixture of the fresh and the familiar that makes Sinfest such a treat to read. Though Ishida examines such ubiquitous comic strip subjects as the temperamental differences between cats and dogs, the eternal miscommunication between men and women, and the general absurdity of popular culture, Ishida puts a unique spin on the material. His Pooch and Percival cartoons provide an instructive example. Like many artists, Ishida portrays Percival as the smarter of the pair, a sly, cynical cat who tolerates the presence of his fellow pet Pooch, while Pooch is portrayed as an unabashed enthusiast who lives completely in the moment, frequently breaking into Snoopy-esque dance to express his joy. From time to time, however, Ishida neatly upends this relationship: in one strip, for example, Percival snidely denounces their master, telling Pooch, “They don’t care about you. They’re just lonely and they use you to fill their stupid void.” Without missing a beat, Pooch replies, “Well, that’s what I do with them.” This kind of carnivalesque reversal is key to Sinfest‘s success, challenging our preconceived notions of catness and dogness as well as our deeply ingrained belief that happiness, however desirable, is antithetical to introspection.

Some of Ishida’s bluntest, funniest strips take aim at popular culture, laying bare the subtexts that inform television, movies, and music. Ishida satirizes the diamond industry’s “Tell her you’d marry her all over again” ad, for example, with a neat, shot-by-shot reconstruction accompanied by a rude gloss on what’s really being sold: “This holiday season,” the narrator intones, “Give the gift that says, ‘Girl, I wanna do ya like it ain’t no thing!’ The gift that will make her fake it like she’s never faked it before!” The entertainment industry’s marginalization of women, blacks, and Asians also comes in for a blistering critique, with Ishida proposing television programs to address the “absence of ethnic/oppressed people in the new fall line-up” such as Geisha Warrior Hoochie, a story about the world’s deadliest masseuse;  Just Shank Me, a comedy documenting “the madcap hijinks of two pimps in a crackhouse”; and The Mex-Files, a Latino riff on Fox’s popular scare-fest. As his savage titles suggest, Ishida isn’t shy about pointing out the industry’s over-reliance on offensive stereotypes to pander to under-served demographics; if anything, these parodies ring with the same kind of uncomfortable truth as Dave Chappelle’s sharpest sketches.

As rude as Ishida can be, he also has a deep affection for the comic strip. He frequently pays homage to favorite cartoonists — albeit in ways that they might not embrace — by placing beloved characters in new and ridiculous contexts. Some of these send-ups are played strictly for laughs: the B.C. crew stoned out of their minds, Garfield on the cover of Pethouse magazine. Some are more pointed — It’s the Apocalypse, Charlies Brown! — gently poking creators for allowing their properties to be milked dry. (If you’ve ever seen You’re Not Elected, Charlie Brown, you’ll appreciate Ishida’s take on these C-list specials all the more.) All of these parodies are executed with painstaking care, as Ishida demonstrates an uncanny ability to mimic Scott Adams, Bill Waterson, Berke Breathed, Gary Larson, and, of course, Charles Schulz.

Given how raunchy and controversial Ishida can be, it’s no wonder that Sinfest began its life as a webcomic rather than a staple of the funny pages. Volume one of the Dark Horse edition collects the first 500+ installments of Sinfest, including twelve prototype strips that Ishida drew for The Daily Bruin (UCLA’s newspaper) in the early 1990s. Looking at these formative cartoons, we can see Ishida experimenting with voice and pushing the boundaries of good taste with crude jabs at campus feminism. These early strips have a more strident quality to them, as Ishida hadn’t yet mastered the difficult task of using boorish characters to critique sexism; instead, his characters just seem loud and not very funny. By the time the first Sinfest strips appeared in 2001, however, Ishida had gotten the hang of it, inviting us to recognize and laugh at his characters’ stupidity, rather than inviting us to laugh with them — and it’s this distinction that allows Ishida to be so in-your-face about issues that make all of us uncomfortable. Imagine Ricky Gervais or Dave Chappelle using comic strips as their preferred mode of expression, and you have a pretty good idea of what Tatsuya Ishida’s Sinfest is all about. Recommended.