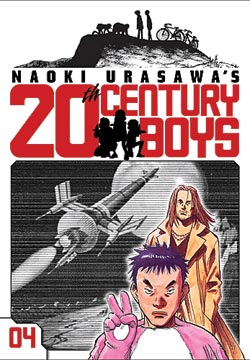 Do you remember those first, glorious seasons of Heroes and Lost? Both shows promised to reinvigorate the sci-fi thriller with complex, flawed characters and plots that moved freely between past, present, and future. By the middle of their second seasons, however, it was clear that neither shows’ writers knew how to successfully resolve the conflicts and mysteries introduced in the first, as the writers resorted to cheap tricks — the out-of-left-field personality reversal, the all-too-convenient coincidence, and the arbitrary let’s-kill-off-a-character plot twist — to keep the myriad plot lines afloat, alienating thousands of viewers in the process. Heroes and Lost seemed proof that even the scariest doomsday scenario would fall flat if saddled with too many subplots and secondary characters.

Reading Naoki Urasawa’s 20th Century Boys, however, convinced me that it is possible to tell a twisty, layered story about ordinary people saving the world from annihilation without succumbing to cliche or unduly testing the audience’s patience. The key to Urasawa’s success? A strong script with vivid characters and a clear sense of purpose, reassuring the reader that all the plot strands are just that: strands, not loose threads.

In 20th Century Boys, humanity’s future rests in the hands of an unpromising lot. There’s Kenji, a college dropout who runs a convenience store; Maruo, a cheerful, plump soul who owns a shop down the street from Kenji; Yoshitune, a shy, bespectacled office man; Otcho, a scruffy renegade who’s been living off the grid in Thailand; and Yukiji, a K-9 officer who can’t control her drug-sniffing dog. All five were childhood friends, members of a secret club that wrote The Book of Prophecy, an elaborate doomsday scenario involving superheroes and giant robots. Now in their thirties, the gang has disbanded — that is, until their pal Donkey, a high-school science teacher, leaps to his death off a building.

Or did he? As Kenji begins pushing for answers, he discovers that Donkey was investigating a mysterious cult, known only as The Friends, that had appropriated the club’s “official” symbol. The more Kenji probes, the more parallels he discovers between The Friends’ clandestine activities and the Book of Prophecy, parallels that suggest the cult is headed by one of Kenji’s old schoolmates. Terrified that The Friends will attempt to recreate the story’s climatic battle, Kenji tracks down his clubmates one by one, assembling a small army to oppose the cult. 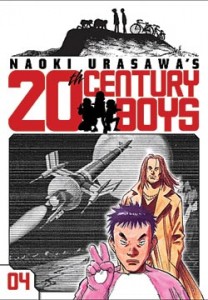 From the very first pages of volume one, Urasawa demonstrates an uncommon ability to move back and forth in time, juxtaposing scenes from Kenji’s past with brief glimpses of the future. The success of these scenes is attributable, in part, to Urasawa’s superb draftsmanship, as he does a fine job of aging his characters from their long-limbed, baby-faced, ten-year-old selves into thirty-somethings weighed down by adult responsibilities.

The integrity of Urasawa’s characterizations also contribute to the success of these temporal leaps; his characters’ adult behavior jives with what we know about them from childhood flashbacks. Otcho, for example, was the club’s most worldly member, the kid who introduced his pals to rock-n-roll and gave them the lowdown on Woodstock; it’s not surprising to see him reincarnated as a long-haired thug-for-hire who despises authority. Ditto for Yanbo and Mabo, twins who terrorized Kenji and friends back in the day. When Yanbo and Mabo resurface in volume five, Urasawa gives them a more pleasing appearance and demeanor than we might have expected, luring us into a false sense that they’ve outgrown their bullying ways. Urasawa then slaps us on the wrist for not trusting our original assessment of the twins, uncorking a fiendish plot twist that’s in keeping with what we already knew about them.

Urasawa uses these flashbacks and flash-forwards to build a dense network of connections among his characters, gradually revealing how and why Kenji’s childhood fantasies are providing the blueprint for a real-life apocalyptic scenario. Heroes and Lost attempted to do the same thing, but neither show succeeded in convincing us that those connections were lying just below the surface waiting for us to discover them; those connections had an arbitrary, bolt-from-the-blue quality. With 20th Century Boys, however, Urasawa makes us feel that we might have unearthed these links without any editorial guidance, as even the most surprising developments still make sense within the story’s elaborate framework.

What gives the story its sense of urgency is Urasawa’s ability to create and sustain a strong sense of fear and anticipation. Six volumes into 20th Century Boys, we’ve had a few tantalizing glimpses of the robot that menaces Tokyo on the eve of the millennium, but we still don’t know what it looks like or what it can do. Urasawa has only shown us the enemy in silhouette: 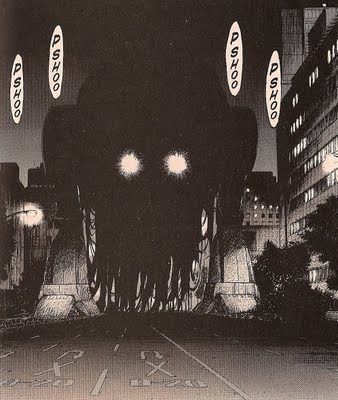 It’s a point I’ve raised in other reviews: an unseen menace is much scarier than one that’s routinely trotted out of the shadows to spook us. Consider the difference between Jaws and its sequels. In the original, Steven Spielberg hinted at the shark’s presence, showing us a dorsal fin or a dark outline moving rapidly beneath the water’s surface, but withholding the “money” shot (“tooth” shot, perhaps?) until the third reel. The few times that we see Jaws attack are genuinely scary because they finally put us face-to-face with those terrible teeth and dead eyes, confirming just how deadly the shark really is. In the sequels, however, the shark is featured prominently; we see it dine on boaters and swimmers in lurid detail. We may marvel at the stupidity of the shark’s victims, or feel disgusted by the gallons of fake blood, but we never feel scared, as we know what we’re up against from the very first scenes.

Urasawa takes a page from Spielberg’s book, showing us just enough of the robot’s form to engage our imagination. The robot’s silhouette hints at its size and strength; if anything, it looks like an enormous man-o-war lumbering through Tokyo. But what stays with us are those fierce, penetrating headlights, so evocative of a prison searchlight or a pair of eyes. As David Ford observes at Are You a Serious Comic Book Reader?, we feel a palpable sense of despair when we see the robot: how can Kenji hope to escape its all-seeing gaze? (By the way, I highly encourage you to read Ford’s essay, though spoiler-phobes should stay away until they’ve finished volume five.)

With more than ten volumes left in 20th Century Boys, I have no idea how Urasawa plans to tie all of the stories’ threads together. I’m confident, however, that he’ll do so with the skill of a master weaver, seamlessly incorporating all of the relationships, plot twists, and motives into an intricate, beautiful tapestry.