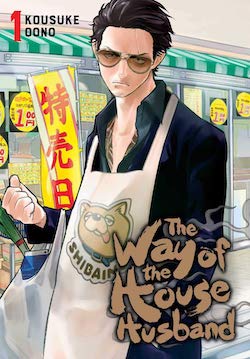 If you’ve seen Lillehammer or My Blue Heaven, you’ll immediately recognize the foundation on which The Way of the Househusband is built: a mafia don or hit man renounces his old life and joins the ranks of ordinary civilians working nine-to-five jobs, mowing lawns, and attending school plays. Predictably, the transition from whacking rivals to whacking weeds is a bumpy one, as the former criminal discovers that the skills he acquired in his old line of work haven’t fully equipped him for a more prosaic existence; seemingly benign interactions at the principal’s office or the post office are fraught with peril, as they’re guided by unfamiliar social codes. Then, too, there’s the specter of his old life—the possibility that a former associate might recognize him or seek him out for one last job.

The Way of the Househusband covers all of this well-spaded ground, earning its laughs by putting fresh twists on familiar scenarios. Its protagonist, the stone-faced Tatsu, is a former yakuza boss-cum-househusband who spends his days making elaborate bento boxes for his wife and scouring the grocery store for bargains. As is standard for this particular fish-out-of-water genre, Tatsu’s sangfroid is sorely tested by the minor annoyances of civilian life: a visit from the neighborhood association president, a trip to the mall. 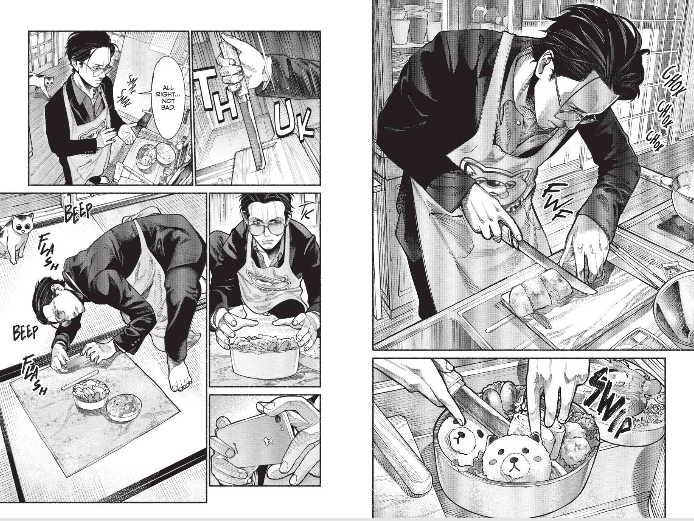 When a knife salesman knocks on Tatsu’s door, for example, author Kousuke Oono teases the idea that his characters’ interactions might end in violence or a harrowing demonstration of Tatsu’s knife-wielding skills. Instead, Tatsu has an opportunity to show off his culinary prowess, winning over the understandably nervous salesman with his “patented hamburger steak plate.” The salesman’s rhapsodic expression and interior monologue put the gag over the top, as the salesman identifies the dish’s secret ingredient—“minced fish paste”—and muses that its flavor “takes me back to my hometown.”

Strong artwork is essential to selling a slapstick premise like Househusband’s, and for the most part, Oono succeeds. Oono’s characters have distinctive appearances that makes it easy to “read” their comic function–the suspicious neighbor, the former crime associate–but Oono never relies on this technique alone, often giving bit players an unexpected moment of steeliness or resourcefulness that nudges the joke in an unexpected direction. The salesman, for example, looks like a soft, middle-aged man, but turns out to be stronger, pushier, and more determined than his initial reaction to Tatsu might suggest, quickly recovering his composure after Tatsu answers the door wearing a bloody apron. (“I was just, uh, doin’ a little butcherin’,” Tatsu explains sheepishly.)

Appearance-wise, Oono does a great job of making Tatsu look utterly incongruous with his surroundings. With his pencil-thin mustache, scarred face, and aviator sunglasses–not to mention his black suit and tattoos–Tatsu cuts a striking figure in the supermarket and on the street. Oono invigorates this obvious sight gag by swathing Tatsu in housewife “drag,” outfitting him in a kerchief and apron emblazoned with a shiba inu to further emphasize just what a fish out of water Tatsu is. That same attention to detail extends to the way that Tatsu moves; Oono draws him like a human cobra whose sinewy, explosive movements strike terror into his enemies’–and his neighbors’–hearts.

Sheldon Drzka and Jennifer LeBlanc’s skillful adaptation of the script is the icing on the cake, giving every character a distinctive voice, and every exchange the pleasant zing of a good Saturday Night Live or Key & Peele sketch–no mean feat, given the cultural specificity of the jokes.

As good as the script and art are, however, I have a sneaking suspicion that Way of the Househusband might run out of gas after three or four volumes unless Oono pivots the storyline in a new direction–say, by introducing a baby into the picture, or revealing that Tatsu’s hard-charging wife has a secret past of her own. But for now, I’m happy to continue reading any series that pits a former yakuza boss against a Roomba and a frisky cat, or depicts a manly man going to extreme lengths to ensure that his wife has a tasty lunch. In the immortal words of Paris Hilton, that’s hawt. Recommended.

3 thoughts on “The Way of the Househusband, Vol. 1”