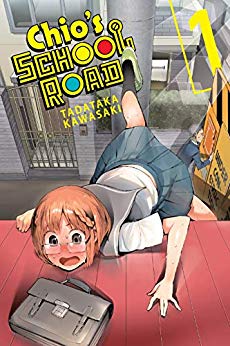 With the new school year underway, now seemed like the ideal time to review Chio’s School Road, a gag manga about an average teen with a rich imagination and a talent for getting into trouble. Think of it as a female answer to My Neighbor Seki or Haven’t You Heard? I’m Sakamoto!!, two similar comedies in which a high school student turns out to have some truly astonishing skills.

Chio’s School Road is built on a simple but sturdy premise: Chio Miyamo, an average high school student, goes to comic lengths to avoid embarrassment. And by “comic lengths,” I mean diving into dumpsters, hiding in a tree, and giving her best friend a passionate kiss to conceal the fact they were eavesdropping on the popular kids. To be sure, these kind of scenarios are standard comic fodder, but Tadataka Kawasaki takes the gags in such unpredictable directions that the payoffs are fresh and funny without frustrating the reader’s desire to see the dignity-challenged Chio prevail.

In chapter three, for example, Chio stumbles into an alley blocked by members of a biker gang. Her attempt to slip past them goes awry, leading to confrontation in which Chio inadvertently escalates the situation with a nervous stutter. “You pick a fight and then laugh? You got some balls!” the head biker declares, prompting Chio to reveal her “true” identity as Bloody Butterfly, an assassin who’s “out every night packing heat” in the mean streets of Tokyo. The joke, of course, is that Chio is recycling bits of dialogue from her favorite first-person shooter game, delivering her lines with the swagger of a yakuza foot solider — a swagger she can’t sustain as soon as she arrives on school grounds.

The only strike against Chio’s School Road is the fan service. In one particularly egregious sequence, Kawasaki draws a woman’s chest as if two balloon animals were tussling under her sweater. (Seriously, folks: breasts do not look like balloon animals. Not even on a braless woman. No, really.) These panels are noticeable in part because his draftsmanship is otherwise crisp and convincing, creating a vivid sense of the urban neighborhood where Chio attends school, and strong sense of the characters’ personalities. Still, I wouldn’t hesitate to recommend Chio’s School Road to fans of My Neighbor Seki and Haven’t You Heard? I’m Sakamoto!, as it delivers a steady stream of amusing, weird, and well-executed jokes. Better still, Chio earns its laughs honestly by reminding us that Chio isn’t ordinary at all; she’s just striving to be. Recommended.