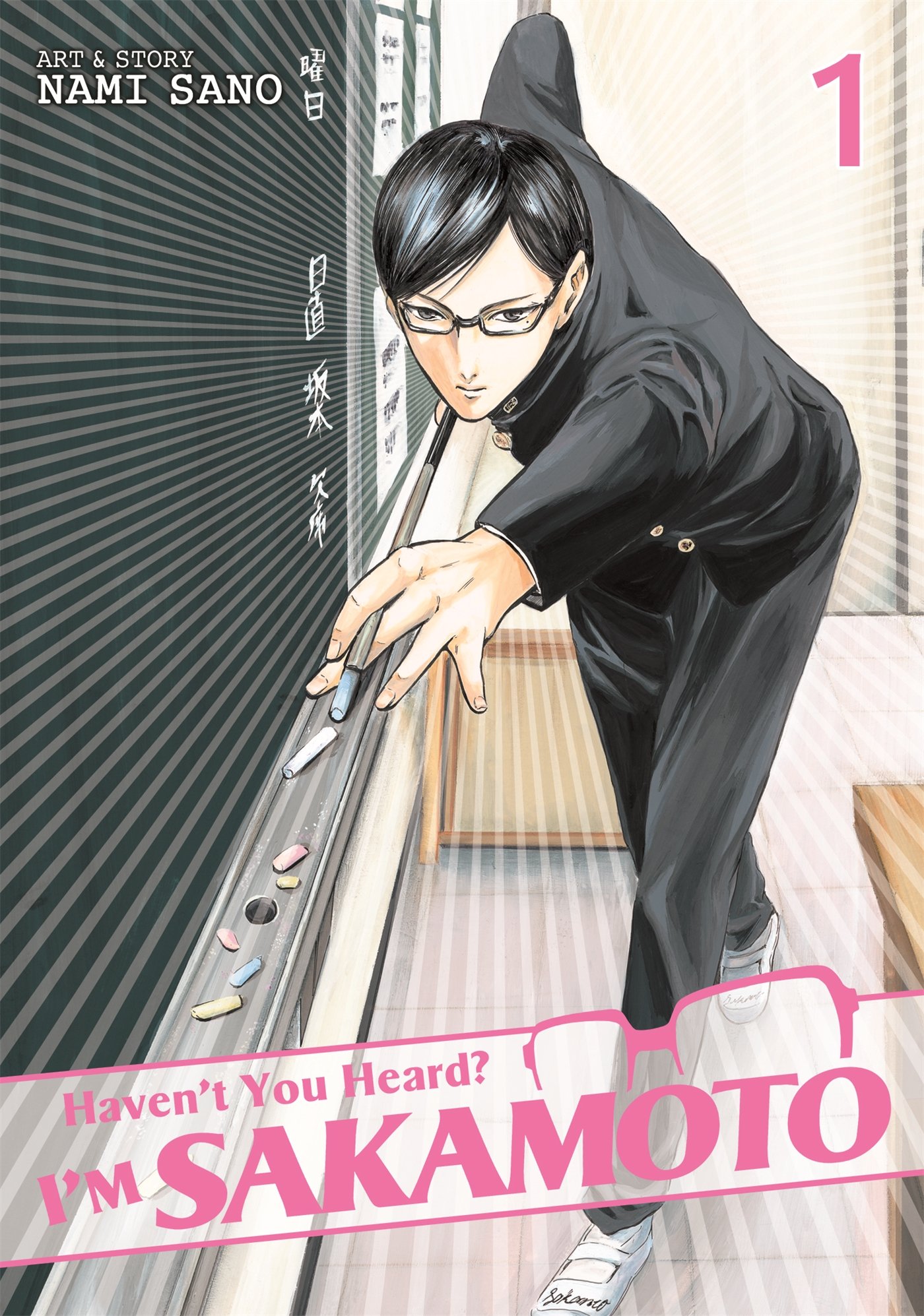 My inbox is overflowing with emails touting back-to-school deals on everything from sneakers to school supplies–a sure sign that the fall semester is right around the corner, and a nice reminder that Seven Seas, VIZ, and Vertical all have new (well, new-ish) school-themed comedies arriving in stores this month. Today, I take a look at Haven’t You Heard? I’m Sakamoto, a comedy about the World’s Most Fascinating High School Student; My Hero Academia, a shonen adventure about a teen who’s studying to become a superhero; and My Neighbor Seki, a gag series about a slacker who elevates procrastination to an art form.

Haven’t You Heard? I’m Sakamoto is “The Aristocrats” of manga, a basic joke that yields endless variations, each more baroque than the last. The premise is simple: transfer student Sakamoto is handsome, brilliant, and athletic, making him a natural target for bullies and lovelorn girls. Any time a challenging situation arises–a bee in a classroom, a classmate injured by a softball–Sakamoto effortlessly meets that challenge, in the process revealing a previously undisclosed talent.

In the hands of a less imaginative storyteller, Sakamoto might be a wish-fulfillment character for every teenager who’s ever been tongue-tied or harassed by other students. Nami Sano puts a distinct spin on the material, however, portraying Sakamoto as so calculating and unflappable that he’s genuinely creepy; Sakamoto never smiles, laughs, or shows any discernible human emotion, even when confronted with other people’s tears or anger. (The real joke seems to be that everyone admires Sakamoto anyway.) I’m not sure that I LMAO, but Sakamoto’s odd persona and equally odd talents are a welcome rebuke to the school council presidents and earnest strivers who populate most teen-oriented manga; I’d much rather spend time with him than a standard-issue shonen prince.

The verdict: You’ll either find Sakamoto’s antics inspired or too weird to be amusing.

Meet Izuku Midoriya: he’s an ordinary teen living in a world where 80% of humanity possesses a super power. That doesn’t stop Izuku from aspiring to become a professional hero, however; since childhood, he’s dreamed about the day he might gain admission to prestigious U.A. High School, a training ground for future crime-fighters. A chance encounter with All Might, a celebrity superhero, gives Izuku a chance to prove his mettle and get the coaching he needs to pass the U.A. entrance exam.

Though the plot twists are unsurprising, and Izuku’s classmates familiar types (e.g. the Bully, the Spazzy Enthusiast), the breezy script propels My Hero Academia past its most hackneyed moments. The clean linework, playful superhero costumes, and artfully staged combat further enhance the series’ appeal; Kohei Horikoshi could give a master class on the reaction shot, especially when a supervillain is wrecking havoc on a downtown skyline. Most importantly, Horikoshi respects the sincerity of Izuku’s ambitions without letting the character’s earnest intensity cast a pall over the fun–in essence, it’s a Silver Age comic in modern shonen drag, with all the corny humor and fist-pumping action of Stan Lee and Steve Ditko’s best work on Spider-Man.

The verdict: My Hero Academia is as predictable as death and taxes, but a smart script and crisp artwork help distinguish it from other titles in the Shonen Jump catalog.

Like Haven’t You Heard? I’m Sakamoto, My Neighbor Seki is a one-joke series: middle-school student Seki goofs off during class, much to the consternation of his seat mate Rumi. Seki isn’t just doodling in his notepad, however. He pets kittens, builds elaborate sculptures from shoji pieces, runs an intraschool mail service, and hosts a tea ceremony. To vary the rhythm of the joke-telling, artist Takuma Morishige occasionally transplants the action from the schoolroom to the playground, though the set-up remains the same; Seki does something outrageous and Rumi reacts, prompting the teacher to scold Rumi for not paying attention.

Given Seki‘s slender premise, it’s not surprising that each volume is a hit-and-miss affair. In volume one, for example, Seki knits a cactus plushie using a double-ended afghan hook. Rumi initially scoffs at his choice of tool; as she observes, “The hallmark of afghan knitting is its unique thickness and softness. It’s a texture best utilized when making sweaters,” not stuffed animals. When she sees the final results, however, she concedes that Seki has chosen the perfect technique and materials for his cactus, sending her into a rapturously funny meditation on yarn. Not all the gags are as successful: Seki’s penchant for staging elaborate scenes with action figures is moderately amusing at first, but grows more tiresome with each new and less imaginative iteration. Still, it’s impossible to deny the energy, creativity, and specificity with which Morishige brings Seki’s exploits to life, making this series more “win” than “fail.”

The verdict: My Neighbor Seki is best enjoyed in one or two chapter installments; when read in large bursts, some scenarios read like 4-koma strips stretched to epic and unfunny proportions.

These reviews originally appeared at MangaBlog on August 7, 2015.