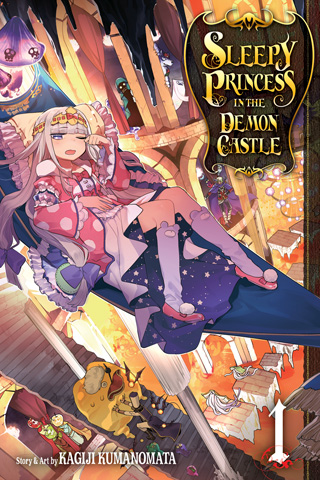 Since one in four Americans suffer from insomnia, it seems like there’s a natural market for Sleepy Princess in the Demon Castle, a manga about a character so determined to get a good night’s sleep that she’d risk death or dismemberment for forty winks. Sleepy Princess plays the title character’s insomnia for laughs, however, turning the heroine’s quest for the perfect mattress into a light-hearted romp, rather than an expensive ordeal involving black-out curtains, melatonin, and meditation videos. That the story is fun and breezy is nothing short of a miracle, though older readers may experience a twinge of jealously at Princess Syalis’ ability to fall asleep anywhere, anytime once she has the right gear.

Author Kagiji Kumanomata handles the set-up with great economy: in just two pages, we learn the Demon King has kidnapped Syalis in a bid to conquer the human world. Though the Demon King stashes Syalis in a dungeon populated by fearsome beasts, Syalis quickly sizes up the situation and makes it work to her advantage. “Since I’m hostage, the Demon King has no intention of harming me,” she notes. “I have no duties to take care of here… And the food’s pretty tasty!” The one drawback to her new digs? “I haven’t been able to get a good night’s rest since I was brought here!” she exclaims.

A chance encounter with teddy demons leads to her first epiphany: her captors’ fur is the ideal stuffing for a comfy pillow. Before long, Syalis is roaming the castle in search of softer sheets, mosquito netting, and a more natural light source, the better to regulate her body’s circadian rhythms. Her dogged efforts to sleep longer or more soundly confound her jailers, who are astonished at how brazenly she takes what she needs; Syalis dies at least three times in her quest for the perfect sleep accessories. (Don’t worry; a handsome demon cleric is on hand to resurrect her mangled body.)

As with other one-joke manga, Sleepy Princess occasionally strains for laughs; an episode involving poison mushrooms falls flat, as does a spoof of Princess Knight. The chapters’ brevity helps keep the story from bogging down in bad jokes, as does Kumanomata’s consummate attention to detail; there’s always something funny happening, even if the gags are buried in the background or lurking on the edges of the page. An artful adaptation by Annette Roman helps bridge the translation divide, as do Susan Daigle-Leach’s marvelous sound effects. (If you’ve ever wondered what a posse of demon teddy bears might sound like, she’s got you covered.) Best of all, Kumanomata has barely scratched the surface when it comes to insomnia, leaving the door open for future quests, from finding the right bedtime snack to finding the right temperature for sleeping. Recommended.

7 thoughts on “Sleepy Princess in the Demon Castle, Vol. 1”