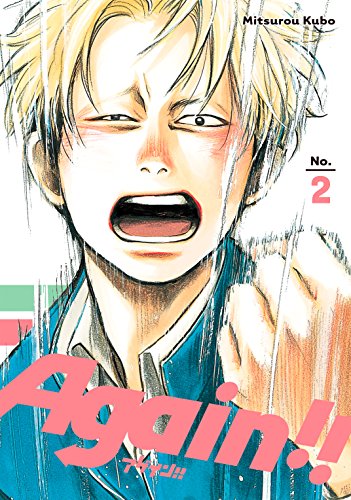 The phenomenal success of Yuri!!! On ICE turned out to be a boon for manga fans, too, as American publishers snapped up two of Mitsurou Kubo’s better-known comics: Moteki: Love Strikes!, a seinen romance about a thirty-something loser who reconnects with women from his past, and Again!!, a time-travel comedy about two teenagers who get a second chance at high school. I won’t lie: Again!! was my hands-down favorite of the two, both for its raw honesty and its sharply observed characters.

Again!! avoids the sophomore slump by briskly advancing the plot without sacrificing the humor or heart that made the first chapters so appealing. Kinichiro and Fujieda both get a turn in the spotlight, with Kinichiro discovering the pleasures of cheering, and Fujieda experiencing loneliness for the first time. Volume two also introduces three new characters, all of whom used to belong to the ouendan: Okuma, the drummer; Masaki, the vice-captain; and Suga, the cheer sergeant. Although the trio’s ostensible role is comic relief, their real function is helping us understand why the ouendan failed, revealing the degree to which their unwanted advances, passivity, and flagrant sexism undermined Usami’s authority as captain and poisoned group morale.

While this information is crucial to the story, it also points to Again!!‘s biggest problem: Usami. Mitsurou Kubo is frank about why Usami resorts to shouting, scolding, and shaming to prove that she’s “man” enough to lead the ouendan — a compassionate insight into a character who often seems more harridan than human. Yet Usami’s actual personality remains a mystery. Everything we learn about her is revealed through other characters, whether they’re discussing her beef with Abe, the head cheerleader, or describing the flurry of media interest in Usami when she first joined the ouendan. We don’t know how Usami feels about her teammates, or why she’s so passionately interested in cheering — two questions that need to be addressed if she’s to become a full-fledged character.

Despite these flaws, Again!! manages to wring fresh laughs from its time-travel premise while depicting high school in all its unpleasantness. Fujieda, for example, vacillates between trying to profit from her knowledge of the future and lamenting her lack of friends. Kinichiro also is caught between past and present: he’s angry that his first kiss didn’t go as planned, and deeply self-conscious after a loud, public declaration of how miserable he feels — an exquisitely awful scene that acknowledges the depth of his pain while recognizing that his brusque behavior directly contributes to his sense of isolation and victimhood. It’s this kind of insight that makes Again!! such a compelling story, reminding us that our memories of being shunned, wronged, or ridiculed can be so one-sided that we’d make the same mistakes if given the opportunity to relive our teenage years. Recommended.