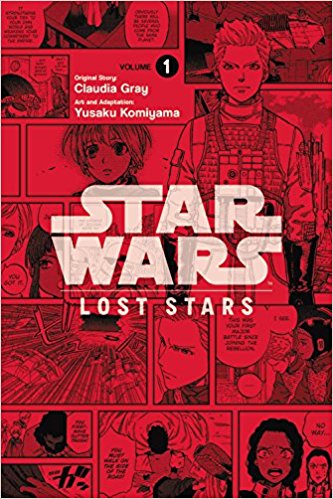 Remember the good ol’ days when a new Star Wars movie took three years to make, and no one was certain that George Lucas was going to get around to Episodes I, II, and III? I miss those days; new installments felt like a cause for celebration and not a dutiful obligation, and the films were an irresistible mixture of bad acting, thrilling space battles, and earnest conversations about the Force. When I’ve felt a twinge of nostalgia for my childhood Star Wars experience, I’ve found the manga adaptations of the original trilogy much more satisfying than the current batch of Disneyfied films. So I was curious to see what an original Star Wars manga might look like: would it explore new territory, or simply recycle the same plot points, a la The Force Awakens, Rogue One, and The Last Jedi?

Turns out that Lost Stars is to Star Wars what Rosencrantz and Guildenstern Are Dead is to Hamlet, a retelling of an iconic story from the perspective of two peripheral characters. Many of the most famous moments from George Lucas’ original trilogy appear in Lost Stars — the capture of Princess Leia, the annihilation of Alderaan, the ice battle on Hoth — though the framing of these events is new, seen through the eyes of two young Imperial pilots: Thane Kyrell and Ciena Ree, both of whom enrolled in the Imperial Academy hoping for adventure and a better way of life.

The inclusion of these famous scenes is a double-edged sword; they provide a handy point of reference for the Star Wars greenhorn while simultaneously pandering to the hardcore fan by faithfully recreating iconic images, characters, and dialogue from A New Hope and The Empire Strikes Back. There’s a dot-the-i quality to them that suggests that Yusaku Komiyuma was more concerned with nailing down the original details than imagining how Thane or Ciena would perceive — or participate — in these events. The other problem with these scenes is that they’re more dramatically interesting than Komiyuma’s brisk but flavorless adaptation of Claudia Gray’s novel. The most thoughtful elements of Gray’s work — particularly the class politics on Thane and Ciena’s home planet Jelucan — are presented in a bald fashion that reads more like CliffNotes than honest-to-goodness fiction, while important scenes of character development are too compressed to give us a sense of who these star-crossed lovers really are. The net result is a comic that successfully bridges the aesthetic worlds of Shonen Jump and Star Wars without achieving its own distinct identity as a manga or a Star Wars story. Your mileage may vary.