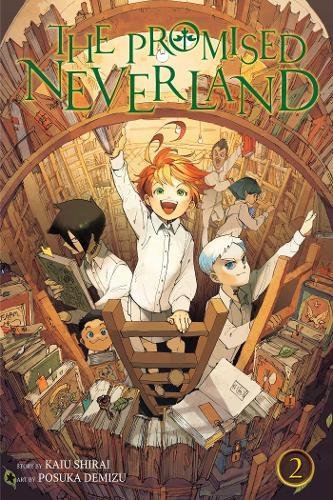 The first volume of The Promised Neverland was a masterclass in how to launch a series: the plotting was intricate but the brisk pacing and well-timed twists prevented an exposition-heavy story from sagging under the weight of its own ambition. Of necessity, volume two unfurls at a slower clip than the first, as the principal trio of Emma, Ray, and Norman work through the logistics of escaping Gracefield Manor, weighing the pros and cons of each element in their intricate plan. Kaiu Shirai also expands the cast to include other stakeholders, dedicating several chapters to Krone, Mother’s new subordinate, and Don and Gilda, two high-achieving students who haven’t yet learned the true purpose of Gracefield Manor.

These character moments are one of the great strengths of volume two. Krone, for example, turns out to be more resourceful than we might have guessed from her brief introduction in volume one; Shirai and Posuka Demizu use a woodland game of tag to reveal Krone’s formidable strength, speed, and cunning, establishing her as yet another major obstacle to escape. In other passages, Shirai peels away the outer layers of her principal characters, complicating the reader’s understanding of who they are, what motivates them to escape, and with whom their true allegiance lies — a necessary corrective to the first volume, which portrayed Emma, Ray, and Norman as just a little too smart, too capable, and too thoughtful to fully register as twelve-year-olds.

Volume two hits an occasional speed bump when characters discuss the escape plan. One overly deliberate scene, for example, finds Roy and Norman in full Scooby Doo mode, explaining how they figured out there was a mole among the residents. And volume two’s physical depiction of Krone is, frankly, uncomfortable, as some of her facial features have been exaggerated in ways that recall the iconography of blackface minstrelsy. Despite these lapses, The Promised Neverland remains suspenseful thanks, in no small part, to Demizu’s brief but horrific dream sequences; these suggestive images — a swirl of bodies, teeth, and monstrous eyes — provide a potent reminder of what’s at stake if the kids don’t escape Mother’s clutches.