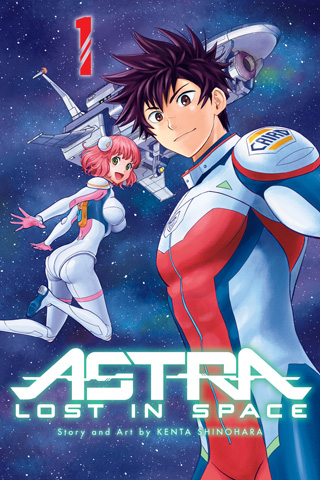 While the US manga market has plenty to offer teen readers, there’s a dearth of titles for kids who have aged out of Yokai Watch but aren’t quite ready for Bleach or Soul Eater. Astra Lost in Space, a new addition to the VIZ catalog, is a perfect transitional title for ten, eleven, and twelve-year-olds who want to read “real” manga: its slick illustrations and adventure-driven plot feel just edgy enough for this group, while the content falls safely within the boundaries of what’s appropriate for the middle school crowd.

The plot of Astra Lost in Space may remind older fans of Moto Hagio’s sci-fi classic “They Were Eleven”: nine high school students find themselves stranded aboard a spaceship whose communication system has been disabled. With only a few days’ supply of water and food on board, the group is forced to improvise a plan for making the five-month journey home. Their solution: hopscotching between planets — let’s call them “Class M” for the sake of convenience — where an abundant supply of water, plants, and animals await harvesting.

As you might guess, the planet-of-the-week formula provides artist Kenta Shinohara (Sket Dance) ample opportunity to draw menacing fauna and flora, and stage imaginative action sequences. In the volume’s best scene, for example, team captain Kanata Hoshijima leap-frogs across a field of sky-high lily pads to rescue the group’s youngest member from a flying, six-legged monster. Shinohara lavishes more attention to detail on Kanata’s long jump technique than on the turgon itself, breaking down each of Kanata’s jumps into discrete steps recognizable to any track-and-field fan: the approach, the takeoff, the hang, and the landing. In a further nod to realism, Shinohara shows us the physical toll that each jump exacts from Kanata; we can practically hear Kanata’s heaving breaths as he readies himself for the next one, an effective gambit for casting doubt on Kanata’s ability to reach Funicia.

For all the skill with which this rescue is staged, Shinohara can’t disguise the fact his characters feel like they’re the products of a Shonen Jump reader’s poll, rather than original creations. Kanata, for example, is a walking, talking checklist of shonen hero traits: he’s strong, friendly, over-confident, and burdened with a tragic backstory that gives him the will to persevere in any situation, no matter how dire. He also happens to be a decathlete, a fact that’s revealed as he rescues Funicia from the turgon’s grip. (At least that explains his javelin-throwing skills.) The other characters are less developed than Kanata, but will seem familiar to anyone who’s read three or four Shonen Jump titles: there’s Quittierre, a pretty rich girl whose tantrums conceal a good heart; Aries, a cute spaz who makes Edith Bunker look like a genius; Zack, a calm, smart boy who speaks in complete paragraphs; Charce, a boy who’s so handsome he sparkles; and a handful of less-defined characters who — according to the Third Law of Manga Plot Dynamics — will either be monster fodder or directly responsible for their classmates’ terrible predicament.

Manga novitiates, however, will be less troubled by these nods to convention, thanks to the story’s brisk pacing, smart-looking layouts, and game attempts at humor. Though there’s a mild bit of fanservice and “fantasy violence” (VIZ’s term, not mine), parents, teachers, and librarians should feel comfortable allowing middle school students to read Astra.

N.B. The first 45 chapters are currently available through the VIZ website for anyone wishing to screen the story for younger readers. Volume one of Astra is also available in a Kindle edition, and will be available in a print edition that’s slated for a December 5th release.