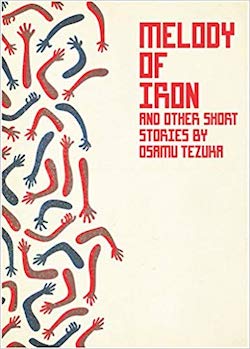 Osamu Teuka hit rock bottom in 1973. Mushi Production, the animation studio he’d launched to great fanfare in 1961, had just declared bankruptcy. Although Tezuka had parted ways with Mushi in 1968, he was still linked to his old company in the public imagination — Mushi was, after all, the studio that had introduced Tetsuwan Atom to television viewers around the globe, and made Kimba the White Lion a household figure in Japan. Tezuka also faced a creative crisis: his work was out of step with emerging trends in what he called “young adult manga,” a point he plaintively addressed in the afterword to the 1974 short story collection Melody of Iron:

The media was whispering that I’d hit my wall… With a broken heart, but also rebellious determination, I blindly tackled magazine jobs …These are examples of my Young Adult Manga write during times when I was mentally hungry. There were many more. Ranging from pieces that were too dark and hopeless, to really harsh pieces that, in today’s day and age, would immediately receive protest from all sorts of organizations. All of my pieces then had really emotionless themes and I don’t remember enjoying writing most of them.

Manga publishers agreed with Tezuka’s glum self-assessment. In 1973, Weekly Shonen Champion offered Tezuka an opportunity to write a limited five-week series with the implicit assumption that Tezuka was publishing his final work. That series turned out to be the opening salvo in a new stage of Tezuka’s career, however, as Black Jack became one of Tezuka’s best-known, best-loved titles, a mixture of bold, expressive cartooning, crazy plot lines, and gut-punch endings all held together by one of the most memorable characters Tezuka ever created.

Not all of Tezuka’s work from the 1970s walks this melodramatic tightrope as effectively as Black Jack, a point underscored by Melody of Iron. The title story, for example, is a three-act mish-mash of gangster movie cliches and seventies pseudo-science. In the first act, a young man runs afoul of the mafia, ratting out one their assassins in court; as punishment, the Albanis cut off his arms and leave him to die. In the second act, Dan holes up in a mad scientist’s laboratory where he learns to use a set of psychokinetic prosthetic arms. And in the final act, Dan’s ability to harness PK proves a mixed blessing when the arms exact revenge against the Albanis… without him.

The finale exemplifies what’s good and bad about Tezuka’s crank-it-to-eleven approach. On the one hand, Tezuka has the cartooning chops to make the arms look sufficiently animated, a necessary condition for selling us on his Stephen King-meets-Mario Puzo concept. On the other hand, Tezuka’s own distinctive style works against the potential horror of the killer limbs; the arms aren’t menacing enough to be a convincing embodiment of Dan’s fierce anger, looking more like the Tin Man’s costume than instruments of death. The arms’ efficacy is further neutered by the staging of their grand murder spree, a string of over-the-top deaths that re-enact Dan’s initial humiliation in the most baldly literal fashion: look, Ma, no arms!

The story also stumbles in its efforts to depict American racial dynamics. Shortly after Dan’s bloody encounter with the Albani’s goons, for example, a mob of African American teenagers harasses Dan, pelting him with stones and mocking him for his missing arms. The way these characters are rendered — with thick lips and maliciously gleeful expressions — creates a profoundly uncomfortable moment for the modern Western reader, resurrecting the visual iconography of minstrel shows to dehumanize these unnamed teens. Dan is rescued by Birdie, a black Vietnam vet who counsels Dan to abandon his murderous plans. Birdie looks more recognizably human than the rock-throwing teens, but he’s more a construct than a character, a noble voice of reason whose primary purpose is to advance the plot by introducing Dan to the mad Dr. Macintosh.

The third strike against “Melody” — and, by extension, the entire anthology — is that the edgier content feels like a self-conscious effort to dress up the material in adult themes, rather than a vehicle for exploring the darker corners of the human psyche. This problem is most pronounced in “Revolution,” a short story about Yasue, a housewife who wakes up from a coma convinced that she’s a young radical named Minako Hotta. In an effort to prove to her husband that she is, in fact, Minako, Yasue describes Minako’s sexual encounters with a wounded revolutionary, explaining how Minako’s tender ministrations brought him back from death’s door. We’re clearly supposed to sympathize with Yasue’s husband — he’s disgusted by Yasue’s “memory” — but his boorish, violent behavior in previous scenes makes it hard for the reader to sympathize with his predicament. Worse still, Minako’s sacrifices are presented as a sign of her dedication to the cause, a notion so risible it seems more like a lame joke from Woody Allen’s Bananas than a credible character motivation.

As with Tezuka’s other work from the period, the principal characters in Melody of Iron are generically attractive types whose personalities emerge primarily through what they say, while the supporting cast members are vividly drawn caricatures whose personalities are established through how they look. Such visual shortcuts are a standard manga technique, of course, but in Tezuka’s hands these aesthetic decisions are effective since they’re rendered with flair and specificity; you know exactly what kind of person Dr. Macintosh is from the shape of his nose, the tousle of his hair, and the hunch of his shoulders. Tezuka also scatters a few Easter eggs through the collection, including a sequence modeled on The Godfather‘s iconic wedding scene, and a panel depicting Broadway’s signature jumble of lights and signs; look closely and you’ll see the names of several Tezuka titles gracing the marquees.

For all the flashes of imagination in Melody of Iron, however, Tezuka was onto something when he characterized his “young adult” stories as “less approachable” than his other work from the early 1970s. Even the most over-the-top scenes feel a little labored and dour, lacking the visual exuberance or emotional oomph that makes “Dingoes” and “Teratoid Cystoma” such memorable entries in the Black Jack canon. Readers looking for an introduction to Tezuka’s late work may find Melody of Iron a good point of entry, but anyone with dog-eared copies of Black Jack or Ode to Kirihito may be underwhelmed by this more workmanlike collection.

3 thoughts on “Melody of Iron”