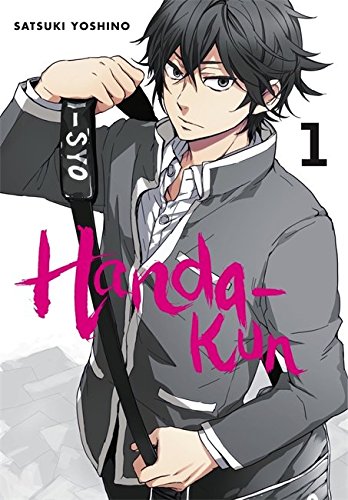 By the time we meet Sei Handa in the first pages of Barakamon, he’s a twenty-something jerk who bristles at criticism, resents authority, and resists overtures of friendship. The tenth-grader we meet in Handa-kun isn’t as curmudgeonly, but he has a problem: he constantly misreads other people’s motives, whether he’s interpreting a love letter as a threat or perceiving a job offer as a “shady” attempt to unload stolen clothing. For all his weirdness, however, Handa’s classmates worship him, viewing his odd behavior and sharp calligraphy skills as proof of his coolness.

Author Satsuki Yoshino wrings a surprising number of laughs from this simple premise by populating the story with a large, boisterous cast of supporting players. Though the outcome of every chapter is the same–female suitors and male rivals alike profess their sincere admiration for Handa–the path to each character’s epiphany takes unexpected turns. Yoshino complements these humorous soliloquies with expressive, elastic artwork that sells us on the characters’ transformations.

In the volume’s best chapter, for example, Yoshino pits Handa against a bespectacled nerd named Juniichi. Juniichi’s entire self-image is rooted in his years of service as class representative–that is, until one of his peers nominates Handa for the honor. Yoshino makes us feel and smell Juniichi’s desperation by showing us how Juniichi sweats, grimaces, and paces his way through the vote-counting process, flagging or rallying with each ballot. By chapter’s end, Juniichi’s cheerful declaration that “Right now, I feel the best I have ever felt in my life” seems like the natural culmination of this fraught emotional journey–even though, of course, his feeling is rooted in a false sense of Handa’s moral rectitude.

My primary concern about Handa-kun is that the series will overstay its welcome. Handa seems fundamentally unable to learn from his interactions with peers, and his classmates seem just as clueless in their blind adoration of him. If Yoshino doesn’t take steps to change this dynamic–perhaps by introducing a character who is genuinely unimpressed with Handa–the series risks settling into a predictable routine. For a few volumes, however, the current set-up will do just fine, offering the same brand of off-kilter humor as Haven’t You Heard? I’m Sakamoto.

The bottom line: The first volume is funny enough to appeal to newbies and die-hard Barakamon fans.

This review originally appeared at MangaBlog on February 26, 2016.