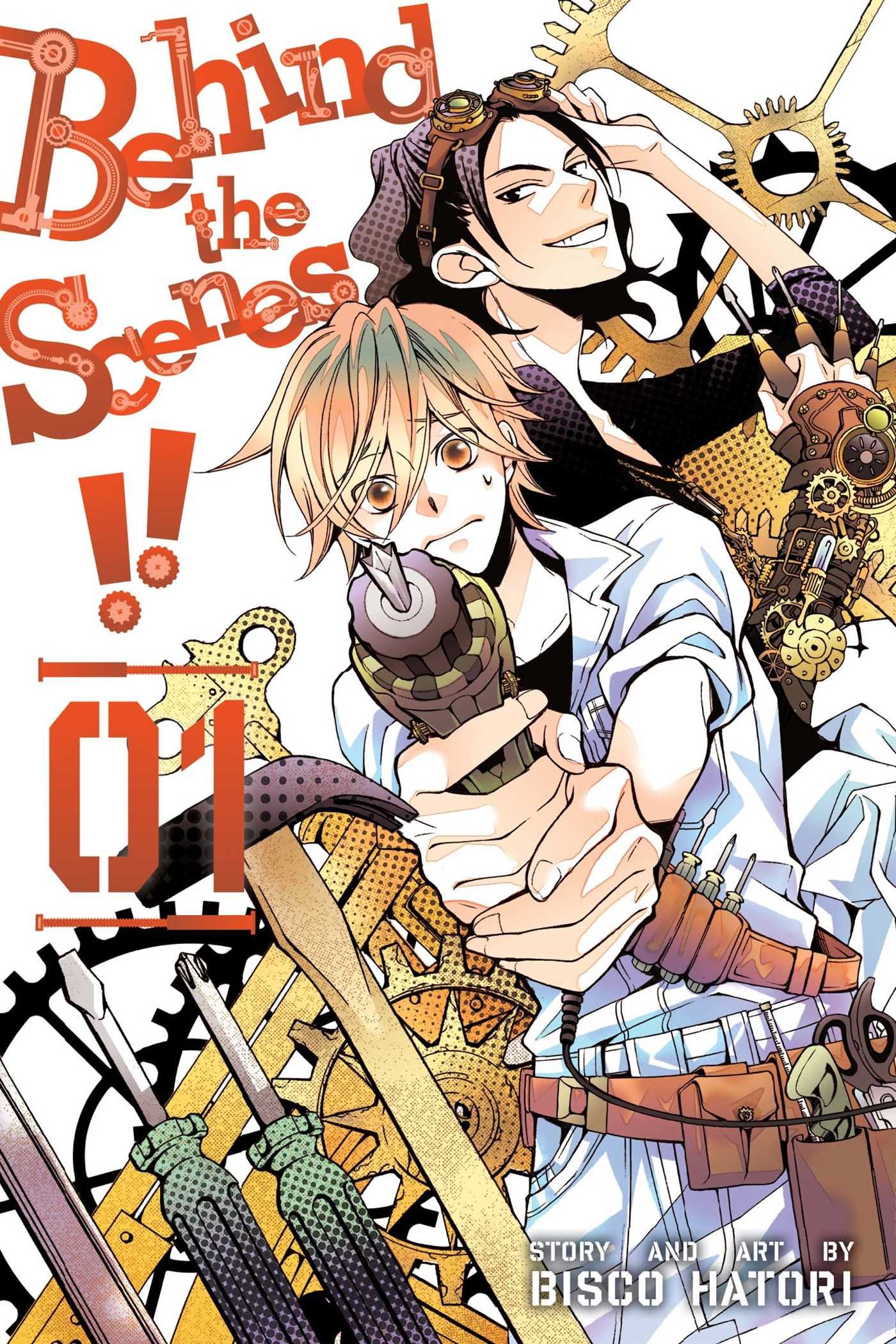 Behind the Scenes!! embodies what’s good–and not so good–about Bisco Hatori’s storytelling. In the plus column, Hatori has a knack for writing ensemble pieces in which the principal characters exhibit a genuine fondness for one another. The stars of her latest series are Shichikoku University’s Art Squad, a scrappy outfit that makes props for the Film Club–or, more accurately, clubs, as there are several students groups competing for the Art Squad’s services, each with their own aesthetic objectives. Ranmaru, the series’ protagonist, gets a crash course in film making when he stumbles into the middle of an Art Squad project: a low-budget horror flick. As penance for disrupting the shoot, Ranmaru joins the Art Squad and is quickly pressed into service painting props, folding paper cranes, and building a fake hot spring.

These scenes–in which Ranmaru and the gang tackle set-design challenges–are among the series’ most enjoyable. Not only do they give us a sneak peek at the movie-making process, they also show us how the club members’ friendly overtures embolden the timid, self-doubting Ranmaru to let go of his painful childhood and become part of a community. In one exchange, for example, Ranmaru tells a fellow squad member about a black-and-white film that made a powerful impression on him. Hatori cuts between scenes from this imaginary film and Ranmaru’s face, registering how powerfully Ranmaru identified with the film’s principal character, a toy robot who dreams of flying. The symbolism of the toy is hard to miss, but the directness and simplicity with which Hatori stages the moment leavens the breezy tone with a note of poignancy.

In the minus column, Hatori often strains for comic effect, overwhelming the reader with too many shots of characters mugging, shouting, and flapping their arms. The Art Squad’s interactions with various student directors give Hatori license to indulge this tendency; the auteurs’ snits and whims frequently force the Art Squad members to behave more like the Scooby Doo gang–or Hollywood fixers–than actual college students juggling coursework and extra-curriculars. (The Art Squad even has a goofy dog mascot.)

At the same time, however, these wannabe Spielbergs bring out the best in Hatori’s draftsmanship. Each one’s personality is firmly established in just a single panel: one looks like a refugee from Swingin’ London (or perhaps an Austin Powers film); another dresses like a Taisho-era author, swanning around campus in a yukata; and a third sports a shaggy mane, Buddy Holly glasses, and a female entourage. The efficiency with which Hatori introduces these characters, and the range of personalities they embody, demonstrate just how crisp and distinctive her artwork can be. That Hatori’s heroes are visually bland by comparison says less about her skills, I think, than it does her desire to make Ranmaru’s new “family” seem normal–well, as normal as anyone who specializes in making fake zombie guts can be.

The bottom line: Tentatively recommended. If Hatori can tone down her characters’ antic behavior, Behind the Scenes!! could be a winner.

This review originally appeared at MangaBlog on February 8, 2016.