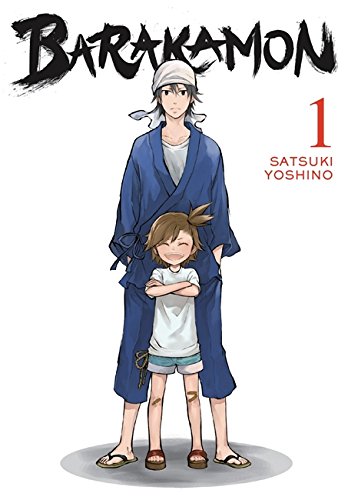 Barakamon is a textbook fish-out-of-water story: an impatient city slicker finds himself in the country where life is slower, folks are simpler, and meaningful lessons abound. Its hero, Seishuu Handa, is a calligrapher whose fiery temper and skillful but unimaginative work have made him a pariah in Tokyo. His foils are the farmers and fishermen of Gotou, a small island on the southwestern tip of Japan that’s inhabited by an assortment of eccentrics, codgers, and naifs.

If this all sounds a little too familiar, it is; you’ve seen variations on this story at the multiplex, on television, and yes, in manga. (I think I liked it better when it was called Cold Comfort Farm, and starred Kate Beckinsale and Rufus Sewell.) Satsuki Yoshino does her best to infuse the story with enough humor and warmth to camouflage its shopworn elements, throwing in jokes about internet pornography, dead frogs, and bad report cards whenever the story teeters on the brink of sentimentality. The mandates of the genre, however, demand that Handa endure humiliations and have epiphanies with astonishing regularity—1.5 times per chapter, by my calculations.

From time to time, however, Yoshino finds fresh ways to show us Handa’s slow and fitful progress towards redemption. The first chapter provides an instructive example: Handa angrily dismisses his six-year-old neighbor Naru when she declares his calligraphy “just like teachers write.” After seeing Naru’s wounded expression, Handa chastises himself for lashing out at a kid. Handa never musters an apology to Naru, but makes restitution by joining her for a series of small adventures. The experience of swimming in the ocean, scrambling over a wall, and watching a sunset prove liberating, leading Handa to an explosive outburst of creativity punctuated by a few high-flying kicks. (Now that’s what I call action painting.) The results are messy, but the message is clear: Handa has the potential to be a genuine artist if he can connect with his playful side.

Like the story, the artwork is serviceable if not particularly distinctive. Yoshino creates enough variety in her character designs that the reader can easily distinguish one islander from another—an important asset in a story with many supporting players. Yoshino’s grasp of anatomy, however, is less assured. When viewed from the side, for example, Handa’s Tokyo nemesis has a cranium like a gorilla’s and a chest to match; when viewed from above, however, the Director appears small and wizened. Other characters suffer from similar bodily distortions that exaggerate their necks, arms, and torsos, especially when Yoshino attempts to draw them from an unusual vantage point.

Yoshino is more successful at creating a sense of place. Through a few simple but evocative images of the harbor and coastline, she firmly establishes the seaside location. She also uses architectural details to suggest how old the village is; though locals enjoy such modern conveniences as television, their homes look otherwise untouched by modernity. Yoshino is less successful in creating a sense of space, however. It’s unclear, for example, if Naru lives a stone’s throw from Handa’s house—hence her frequent intrusions—or if she lives a mile down the road.

The dialogue, too, plays an important role in establishing the setting. Faced with the difficult task of rendering the Gotou dialect, translators Krista and Karie Shipley chose a broad Southern accent for the local population. That decision neatly illustrates the cultural divide between Handa and his neighbors, but at the cost of nuance; a few jokes that hinge on vocabulary simply can’t be conveyed by this particular adaptation strategy. (The Shipleys’ translation notes are helpful in demystifying these exchanges.) Most of the punchlines, however, need no such editorial interventions to enjoy; certain elements of city slicker/country bumpkin humor transcend culture.

My verdict: Barakamon has enough charm and energy to engage the reader, even if the story isn’t executed with enough precision or subtlety to transcend the basic requirements of the fish-out-of-water genre.

This review originally appeared at MangaBlog on November 19, 2014.