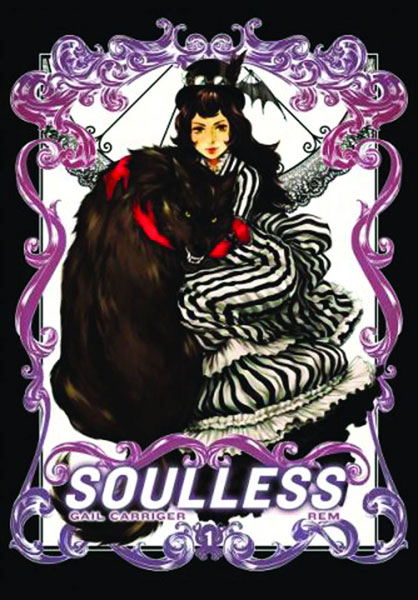 Soulless is saucy in the best possible sense of the word: it’s bold and smart, with a heroine so irrepressible you can see why author Gail Carriger couldn’t tell Alexia Tarabotti’s story in just one book.

As fans of Carriger’s Parasol Protectorate novels know, Alexia is a sharp-tongued woman living in Victorian London — or rather, a steampunk version of Victorian London in which vampires and werewolves co-exist with the “daylight” (read: “human”) world. As she would in the real nineteenth-century England, Alexia faces pressure to marry, a prospect complicated by her age — she’s twenty-six — her ethnicity — her father was Italian — and her prodigious intellect. Alexia has one additional strike against her, albeit one that doesn’t affect her marriageability: she’s soulless, a “preternatural” being who can neutralize the vampires and werewolves’ power, temporarily reducing them to mortal form.

Plot-wise, Soulless is an agreeable mishmash of Young Sherlock Holmes, Underworld, and Mansfield Park, with a dash of Jules Verne for good measure. The basic storyline is a whodunnit: Alexia becomes the prime suspect in a string of supernatural disappearances around London, and must collaborate with Lord Collan Maccon, a belligerent werewolf detective, to clear her name. What they discover in the course of their investigation is a grand conspiracy worthy of an Indiana Jones movie, complete with evil scientists, vampire “hives,” sinister-looking laboratories, and a golem; all that’s missing is the Ark of the Covenant and a few Nazi generals.

At the same time, Soulless is a romance. Alexia would make a swell Austen heroine, as she faces the kind of obstacles to marriage that would elicit sympathy from the Dashwood girls and Fanny Price. The greatest of these hurdles isn’t her name or her age, however; it’s Alexia’s firm conviction that marriage should not be a socially or financially expedient union, but a true partnership. Paging Elizabeth Bennett!

Given how many genres are present in the text — it’s a crime procedural, a thriller, an urban fantasy, a comedy of manners, and a bodice ripper — it’s astonishing how well all the tropes mesh. Some of that success can be attributed to the dialogue. The characters’ peppery exchanges are an affectionate parody of British costume dramas; substitute “soulless” for “penniless,” and Alexia could easily be a character in Sense and Sensibility. A few passages strain too hard for effect — would anyone have really chosen “comestibles” over “food” when complaining about a party? — but for the most part, Carriger finds a convincing tone that’s neither faux-archaic nor casually contemporary.

Soulless’ other great strength is its appealing cast of characters. Alexia and Maccon are clearly the stars of this imaginary universe; anyone who’s read Middlemarch or Emma will immediately recognize that Alexia and Maccon are The Main Couple, as they spend most of volume one denying their mutual attraction and trading zingers. (“I may be a werewolf and Scottish, but despite what you may have read about both, we are not cads!” Maccon declares in a fit of Darcy-esque pique.) In the spirit of the best nineteenth-century novels, however, Carriger situates her lovebirds inside a vibrant community, albeit one inhabited by grumpy werewolves and flamboyant vampires in lieu of parsons, baronets, and virtuous maidens. Though these supporting characters don’t always get the screen time they deserve, Lord Akeldama, Professor Lyall, and Ivy Hisselpenny enliven the narrative with sharp observations and sound advice for Alexia and Maccon.

Manga artist Rem, best-known for her work on Vampire Kisses, does a fine job of translating Carriger’s prose into pictures. Though Rem’s attention to period detail is evident in the characters’ sumptuous costumes and lavishly furnished parlors, her meticulousness extends to the action sequences as well. An early fight between Alexia and a vampire is expertly staged, making effective use of dramatic camera angles and overturned furniture to capture the intensity of their struggle. Rem also manages to fold many of Carriger’s steampunk flourishes — zeppelins, steam-powered carriages, “glassicals” — into the story without overwhelming the eye; if anything, I found the subtlety of the steampunk elements an improvement on the novel, where the object descriptions sometimes felt like tangents.

The only drawback to the artwork is Alexia herself. In the novels, Carriger describes her as plain and full-figured; in the manga, however, Rem depicts Alexia as a buxom, wasp-waisted babe with a pouty mouth and a pretty face. That transformation is certainly in keeping with manga aesthetics — even the plainest young characters are usually pleasing to the eye — but not with the source material; as a reader, one of the real pleasures of Soulless is watching the heroine triumph on the strength of her character and brains, not the size of her bust.

On the whole, however, Rem has succeeded in taking a justifiably popular novel and making it work in a different medium on its own terms; readers new to Carriger’s work will be as enchanted with this cheeky, fun adaptation as her hardcore fans. Recommended.

Review copy provided by Yen Press. Volume one of Soulless: The Manga will be released in March 2012.