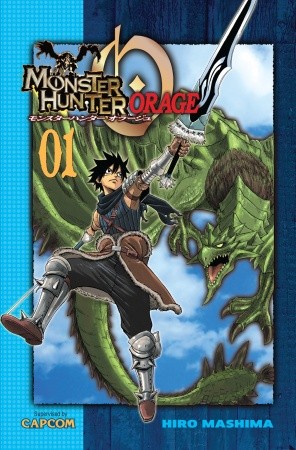 As a critic, few words fill me with more trepidation than “inspired by the popular video game.” I’ve read my share of video game manga, most of which were thin on plot and characterization but heavy on explanation. Every so often, however, I run across a series like Monster Hunter Orage, which manages to stay true to its roots while offering something to readers who’ve never played the game.

What makes Monster Hunter work is Hiro Mashima’s script, which does a solid job of translating game play into genuine plot. In the original game, players answered to a town guild, accepting orders to hunt or capture a variety of monsters. Players could fly solo or team up with one, two, or three other gamers to bring down bigger monsters and boost their skill rating. (The ultimate object of the game was to attain the highest skill level, rather than accumulate the greatest number of points.)

In the manga, Mashima builds a story around Shiki, a hunter on a quest to find Myo Galuna, a.k.a. the Thunder Dragon. Shiki is a Seal Hunter, a special category of monster-slayer who’s free to pursue game without interference from town guilds. Though he’s strong and skilled, his brash behavior and social cluelessness prove serious barriers to finding comrades — that is, until he meets Ailee, a fiercely independent hunter who shares Shiki’s desire to find the Thunder Dragon, and Sakya, a gunner who wants to avenge her father’s death.

Shiki and Ailee’s peppery rapport provides a welcome jolt of comic energy, whether they’re arguing about how to kill a monster or how to catch dinner. Like many of Mashima’s heroines, Ailee has little tolerance for teenage male foolishness, and frequently dismisses Shiki with a withering comment. (When they first meet, for example, Shiki blurts out, “Say, haven’t we met before?”, to which Ailee replies, “It’s been forever since I heard that stale pick-up line. Wait. Don’t respond. Just go somewhere else.”) Other supporting characters play a similar role in keeping the tone breezy: the Prince, a preening, foolish hunter, is font of malapropisms, while Maru, the Prince’s sidekick, provides an energetic stream of patter whenever the two appear together.

The art is as nimble as the script, relying heavily on Mashima’s crisp linework to give definition to his characters, monsters, and landscapes; he’s as sparing with screentone as Arina Tanemura is with white space. Though the characters have marvelous, elastic faces, capable of registering fifteen degrees of surprise and indignation, the monsters are unimpressive; they look a lot like dinosaurs with extra feathers and appendages. Put the men and the monsters together, however, and the results are terrific: the fights are graceful and swift, allowing the main characters to demonstrate their martial arts acumen without dragging out the conflict over three or four chapters.

If I had any complaint about Monster Hunter Orage, it’s that the story quickly falls into a predictable pattern. The outcome of the fights is never in question, nor is Shiki’s role as the hunter who will ultimately be the one to outsmart the monster. Even efforts to introduce subplots only go so far; by the end of volume one, it’s clear that the Prince will do anything to destroy Shiki, but his buffoonish behavior and general incompetence make him a less-than-credible threat to the heroes.

But if Monster Hunter isn’t as deep as it could be, it’s still a lot of fun, propelled by a goofy, anything-for-a-laugh script, appealing characters, and plenty of man-on-monster action. And at four volumes, the series won’t overstay its welcome. A good beach read.