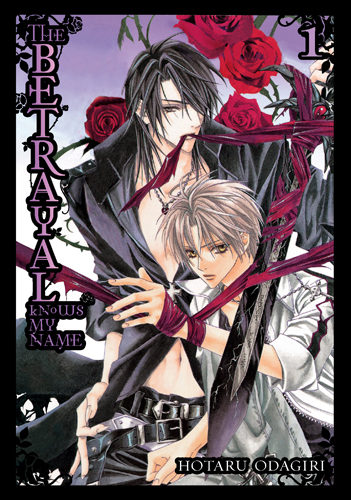 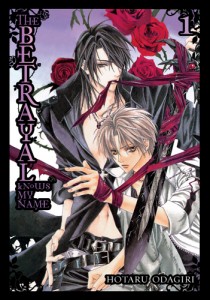 For years, Tokyopop specialized in a particular genre — call it “forbidden bromance,” for want of a better term — in which two handsome, impeccably groomed young men teetered on the brink of a relationship. That relationship usually faced a serious obstacle: one might be a demon and the other a human, for example, or one may have killed the other in a previous life. Most of the story was devoted to uncovering the reason that fate united them, providing the heroes ample time for impassioned conversations and meaningful looks.

At their best, titles like Tokyo Bablyon, Silver Diamond, and X-Kai were silly but engrossing, with plot twists as gloriously melodramatic as an episode of Passions; at their worst, they read like bad slash fic, with purple dialogue and an abundance of poorly explained plot details. Yen Press’ latest offering, The Betrayal Knows My Name, has all the requisite elements to be a gas — pretty-boy leads, past-life tragedy, perfectly moussed locks — but never quite rises to the level of a great guilty pleasure.

Not that volume one wants for activity; every chapter is packed with action sequences, murderous demons, dramatic confrontations, and shocking revelations. What Betrayal lacks is the kind of tightly constructed narrative that made the best bromances such a treat to read. The characters barely rise above type, while script flirts with incoherence at every turn, introducing new characters and subplots at such a furious pace that the central love story is often in danger of being overshadowed. Even the dialogue sags; when the characters aren’t explaining things to one another, they’re so wrapped up in their own thoughts that their monologues become tedious. (Sample: “We can’t survive on principles alone. And everyone would like to live without getting tainted at all. But that’s not how things are.”)

That’s a pity, because The Betrayal Knows My Name looks a lot like my favorite bromances. The character designs owe an obvious debt to CLAMP’s high Baroque period, when characters wore trench coats and dog collars and always had windswept hair. And Hotaru Odagiri certainly knows how to draw brooding men; her heroes, Yuki and Zess, spend a great deal of time staring into space while wearing soulful expressions. (They also know how to pop a pose for readers, allowing us to savor the sheer ridiculousness of their outfits, and the artful way in which they leave their shirts unbuttoned to the waist.)

Yet the prettiness of the character designs can’t camouflage the fact that Betrayal is straining too hard for effect; what should be a great, emo-porn pleasure is something of a chore to read, thanks to its relentless pace, clumsy dialogue, and chemistry-free leads. Readers who can’t get enough of the forbidden bromance genre may find Betrayal an adequate fix; others are encouraged to hold out for Tokyo Babylon‘s return this fall.