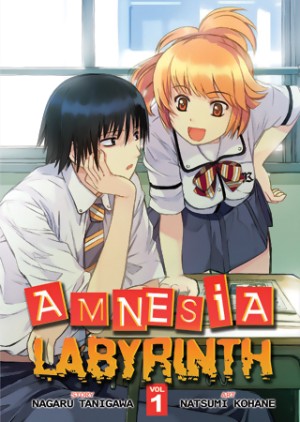 In public, Souji Kushiki leads a charmed life: he’s wealthy and handsome, popular with girls, smarter than his classmates, and faster than anyone on the track team. In private, Souji lives under a dark cloud: his older brother disappeared, a possible victim of foul play, while his sisters paw and flirt with him like Aphrodite and Hera competing for Paris’ affections. Souji’s private and public lives collide when a family emergency requires him to return home from boarding school. Souji’s new school turns out to be Murder High: the school’s top student, best athlete, and council president have all been brutally killed, and the evidence suggests that someone in the Kushiki household is responsible.

For a manga that features incest, murder, and at least one character with a split personality, Amnesia Labyrinth is awfully dull, plodding from scene to scene with little sense of urgency. Part of the problem lies with the source material; as writer Nagaru Tanigawa explains in the afterword to volume one, Amnesia Labyrinth was “based on a story that, while it didn’t have enough to become a full-fledged novel, had been kicking around in my head for years.” He admitted that he had to “dismantle” his original idea and “reinvent the characters”; small wonder that the published version was, by his own admission, filled with “lazy, phantom passages,” vestiges of an earlier story idea.

Those “phantom passages” crop up repeatedly throughout the manga, especially when Souji interacts with his sisters. In one excruciatingly pointless scene, Souji watches younger sis Harumi eat a popsicle, a wordless moment that serves no dramatic purpose other than to reinforce the idea that Harumi is more demure than sibling rivals Youko and Saki. Other scenes go on too long; in chapter one, for example, Tanigawa makes one of his female characters recite Souji’s entire CV in comic detail. (“Your grades… they’re among the top in the nation,” Sasai declares. “You put everyone to shame on Sports Day. You weren’t even on the track team, but you still cleaned up in the races.”)

That expository soliloquy points to one of Amnesia Labyrinth‘s other problems: Souji. Though we learn a lot about him from other characters, we never see Souji do anything that warrants their high esteem; it’s hard to imagine why his three sisters are so keen to bed him, as he seems like a rather ordinary teen, passive in attitude and behavior. The only moments in which we get a glimpse of his true personality are when he interacts with Sasai, a pushy classmate from his new school. She teases and flatters Souji, trying to provoke a response, and when that strategy fails, engages him in a semi-philosophical conversation about death. Their conversation might be trivial from an adult point of view, but from a teenage perspective, it feels right, two young people trying to make a terrible abstraction seem less scary.

Souji’s sisters are equally problematic. They’re a harem of types, rather than three distinctive characters: Youko, Souji’s full sister, is crazy and wears a kimono; Harumi, Souji’s stepsister, is the embodiment of moe, blushing and stammering around Souji; and Saki, Souji’s half sister, is a fetish object, cheerfully trading a maid’s outfit for a school uniform. The girls’ sexual aggression isn’t beyond the realm of possibility; one might plausibly infer that their gamesmanship and flirtation are an attempt to establish a pecking order. But the scenes lack emotion or context, registering more as cheap titillation — hey, Souji’s such a stud that even his sisters want him! — than an essential element of the plot.

The one bright spot in this otherwise lackluster affair is the art. Using clean, precise linework, Natsumi Kohane renders each setting in careful detail, drawing a sharp distinction between the Kushiki’s isolated rural home and the school’s bustling urban neighborhood. There’s a lovely — if unnecessary — sequence of panels showing us what kind of flowers grow in the Kushiki’s garden, thus establishing the time of year and suggesting the home’s claustrophobic, hothouse atmosphere. (It’s a bit like finding a tribute to Kazuo Miyagawa’s cinematography embedded in a Vin Diesel flick.) Even the fanservice is handled tastefully; the female characters have plausible, pleasing body shapes that demonstrate a firm grasp of basic anatomy. There’s some brief nudity, but we’re spared the panty shots and boob collisions typical of harem manga.

I’m hesitant to pan Amnesia Labyrinth, as I know I’m not its target audience. Souji is clearly intended to be a surrogate for teenage boys who fantasize about being brilliant, athletic, and irresistible to girls without the slightest effort. For readers outside this demographic, however, the series’ main draw — the mystery — is too underdeveloped to be interesting, and the characterizations too thin to inspire sympathy for or identification with any of the cast.

Review copy provided by Seven Seas. Volume one will be released on February 28, 2011.