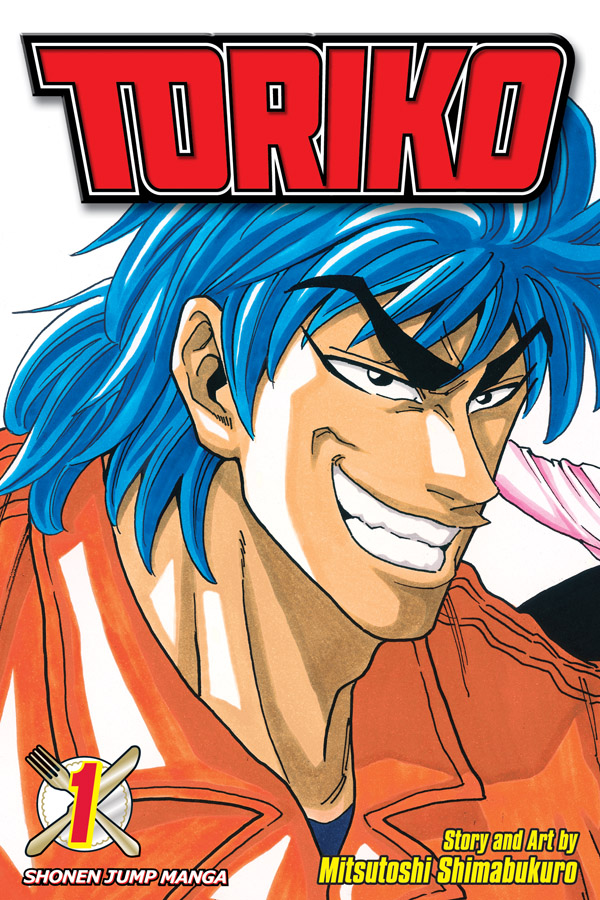 Imagine, if you can, an extreme sports edition of Iron Chef, one in which the contestants have to catch and cook the show’s theme ingredient. That’s essentially what Toriko is: an over-the-top food manga in which a hunter and a chef find — and eat — the world’s rarest delicacies.

Toriko, the titular character, is a peculiar mix of id and super-ego. On the one hand, he’s pure instinct: he hunts with his nose, uses brute strength to overwhelm his opponents, and gobbles every meal with animalistic gusto. On the other, he’s a hunter-philosopher who disdains slaughter for sport; Toriko may wrestle six-armed gorillas into submission, but he only kills creatures for food.

His sidekick, Komatsu, is a small, nervous chef who plays Chester to Toriko’s Spike, twitching and talking up a storm whenever they embark on a new mission or face danger. Komatsu is initially assigned to supervise Toriko; Komatsu’s boss, head of the International Gourmet Organization (IGO), wants to make sure that Toriko successfully fulfills an order for garara gator, an eight-legged, bus-sized monster prized for its delicate meat. Though Komatsu spends most of their expedition screaming, cowering, and clinging to Toriko, Komatsu is moved by Toriko’s passion. “When I saw you on the hunt close up,” Komatsu tells Toriko, “I decided it’s worth risking my life to follow you.” He elaborates:

I want to understand where those ingredients come from and what they look like in their natural habitat. By the time the high-level prey are shipped to us, they’re already slaughtered and just pieces of meat.

I never thought I’d see a Shonen Jump character extol the value of slow foods, but that’s a big part of Toriko‘s appeal: the concept screams Ted Nugent, but the underlying philosophy says Michael Pollan. Toriko still barks like a shonen manga, of course, with lengthy fight scenes, colorful opponents, and jokes a-plenty. But there’s a more thoughtful dimension to the story than is warranted by the material; many of the characters’ soliloquies wouldn’t be out of place in Oishinbo or The Omnivore’s Dilemma, as Toriko and Komatsu wax poetic about the flavor and succulence of freshly-caught meat.

Toriko‘s other strength is the artwork; look past that god-awful cover, and what you’ll find is some excellent cartooning. The monsters are fierce and slightly repulsive but plausibly edible, while the humans run the gamut from ridiculously virile — Toriko looks like a youthful Sylvester Stallone — to thoroughly decadent — the IGO’s Bureau Chief wears a leisure suit, aviator shades, and an ill-advised shag. Artist Mitsutoshi Shimabukaro renders each setting with enough detail to make it feel like a distinctive habitat; his mangrove swamp, where the garara gator lives, looks just pre-historic enough to harbor a pterodactyl or two. Not all of the visual gambits work: Toriko lives in a candy house, for example, a choice that seems out of character for a manly meat-eater, while a rainbow fruit tree falls flat in grayscale. Shimabukaro never belabors a sight gag, however, nimbly moving to the next set-piece before the failures even register.

I’d be the first to admit that Toriko won’t be every locavore’s idea of fun. I nearly lost my appetite watching Toriko lay waste to an entire banquet’s worth of food, and found some of the hunting scenes too protracted. If you’ve got a hearty constitution and a deep, abiding love of cooking competitions, however, this macho food-fest might just tickle your taste buds.