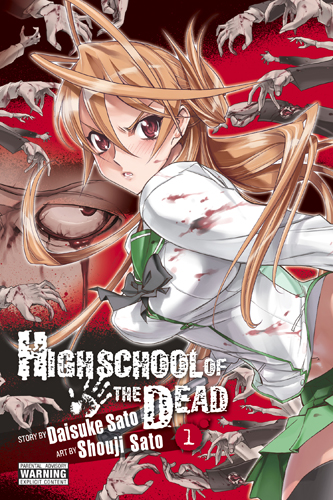 A poor man’s Dawn of the Dead — that’s how I’d describe Highschool of the Dead, a slick, violent zombie story that borrows shamelessly from the George Romero canon. Whether that’s a good thing depends a lot on your relationship with Romero. If you thought Dawn of the Dead was a sly poke at American society — its consumerism, class divisions, and latent racism — Daisuke Sato and Shouji Sato’s manga will seem awfully thin, as the authors are more concerned with dishing out panty shots than revealing how threadbare the social fabric really is. If you found Romero’s film unnecessarily burdened with subtext, however, you might just cotton to the Satos’ ultra-violent update.

As the title implies, the story begins at an ordinary high school in Tokyo. When the staff contract a mysterious disease that transforms them into zombies, they wreak havoc, infecting hundreds of other people as they chomp, rend, and tear their way through campus. A small band of students take refuge on the roof, hoping for a helicopter rescue. What they discover, however, is that the entire city has descended into chaos, leaving them little choice than to find a safer place to wait out the crisis.

From a narrative point of view, Highschool of the Dead follows the zombie playbook to the letter. The zombies are slow and shambling; the the story takes place in a closed environment where the zombies’ sheer numbers give them a decided advantage; and the characters can barely stand each other, setting aside their mutual contempt only for the zombie-fighting cause. But while Romero made the most of his film’s shopping mall setting, the Satos treat their high school’s corridors and classrooms as just another indoor space filled with convenient weapons. (Call me crazy, but I don’t remember nail guns lying around the Newton North science labs.) The fight scenes are choppy and poorly staged, giving little indication of how the characters are moving through the space or where, exactly, they are in relation to the school’s main entrance. Even the violence-porn flourishes lack imagination: zombies die by baseball bat, power drill, broom handle, sword, and fire hose, but none of the characters improvises an interesting weapon out of something unique to the school.

The script is as predictable and clumsy as the fight scenes; the characters speak in exposition-heavy soundbites that bear little resemble to real conversation. (Sample: “Rumor has it that your childhood girlfriend ended up in your class when she stayed back and is going out with Igou now, right?”) Daisuke Sato assigns each character a few defining personality traits, raising the possibility that the characters’ economic and social disparities might inform the way they interact. The characterizations are so meager and inconsistent, however, that it’s tough to remember who’s who; I learned more from reading the Wikipedia article on Highschool of the Dead than from the manga itself, never a good sign when the characters, in fact, do have important backstories that shape their opinions of one another.

The biggest problem with Highschool of the Dead is its relentless commitment to cheesecake. The Satos work fanservice into as many scenes as possible, taking full advantage of every stairwell, fight, fall, and female death to flash derrieres and panties; only an episode of Strike Witches has more up-skirt imagery. Adding insult to injury is Shouji Sato’s willful disregard for basic female anatomy. Several of the female characters’ bust lines are so monstrously distended that it would be impossible for the characters to actually stand up and walk in real life, let alone fight zombies. (Hint to aspiring manga artists: large breasts do not look like grossly misshapen lemons or balloon animals.) I realize that costume failures and nubile girls are a staple of horror movies, but when the cheesecake is so poorly done, it’s hard to imagine who would find it arousing; the Satos could take a few tips from Robert Rodriguez on how to incorporate plausible, sexy women into a monster flick.

And when the scariest thing about a zombie story is the way the female characters’ breasts are drawn, well… I’d say the creators have fallen down on the job. The bottom line: unless you’re a die-hard zombie fan or panty-shot connoisseur, you’re better off seeking undead thrills elsewhere.

Review copy provided by Yen Press. Volume one of Highschool of the Dead will go on sale January 25, 2011.