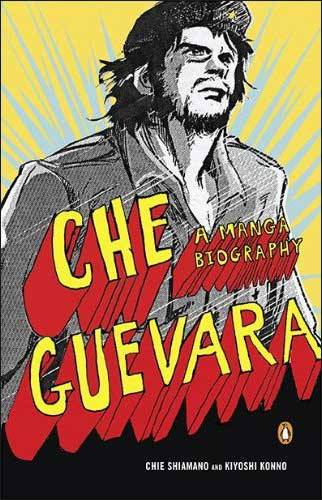 While there’s no shortage of boring or cliche manga available in English — even with fewer titles being released this year — grade-A turkeys are going the way of the dodo. I had so much difficulty compiling this year’s Manga Hall of Shame Nominees, in fact, that I turned to Twitter for help. Some folks named The Melancholy of Suzumiya Haruhi-chan for being dull and incomprehensible; others fingered Saving Life for unsexy fanservice and dopey characters; one person chastised You Higuri for foisting Nighthead Genesis on the world; and one brave soul bucked conventional wisdom by naming AX: A Collection of Alternative Manga as her Worst of 2010. (You can see more reader nominations at #badmanga2010.) The conversation made me laugh, but it also helped me clarify my own thinking about the subject. Common to all five titles on this year’s list is a flagrant disregard for the reader; no matter how interesting the initial premise, these stories derailed quickly, thanks to lousy artwork, disjointed storytelling, and/or a juvenile fixation on body parts and bodily functions. 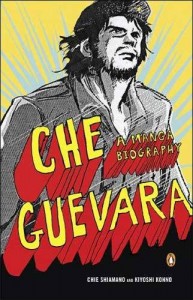 In the opening pages of Che Guevara: A Manga Biography, the creators promise to reveal the flesh-and-blood person behind the iconic images on t-shirts and posters. The authors never deliver on that promise, however, instead relying heavily on Guevara’s own self-promoting essays for most of their information. That commitment to primary sources might be laudable if the authors made any effort to reveal the inconsistencies in Guevara’s beliefs, but Guevara’s heroism is never in doubt; he’s always portrayed as brave, strong, and capable, even when abandoning his first family or serving in Fidel Castro’s administration. (The authors also gloss over Guevara’s enthusiasm for the Stalinist regime, perhaps because it’s hard to put a positive spin on anyone or anything associated with that period in Soviet history.) More frustrating still is how choppy and uneven the manga is; the authors compress major battles and periods of Guevara’s life into one or two pages, leaving no room for them to explore these events with any nuance. Clumsy character designs and endless talking-head scenes complete the not-so-pretty picture.

Hiro Madarame may draw achingly pretty manga, but her stories are surprisingly ugly and unpleasant, filled with Tragically Gay Characters and manipulative, shrewish women who drive men to homosexuality. The nadir of this slim anthology is the titular story, which includes a brutal rape scene that’s disturbing both for its sadism (it wouldn’t be out of place in David Fincher’s ultra-gory Seven) and for the speed with which the victim and the attacker reconcile. It’s true that many domestic abuse victims go through cycles of leaving and reuniting with their tormentors, but Madarame presents this act of violence as testament to her characters’ deep attachment to one another, rather than evidence of their pathologically unhealthy relationship. Call me a curmudgeonly old feminist if you must, but romanticizing rape and possessive behavior — no matter what the gender or sexual orientation of the parties involved — just isn’t very sexy. —Reviewed at The Manga Critic, 8/31/10 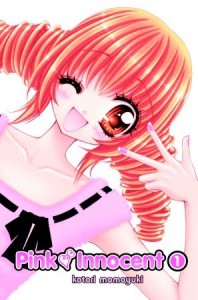 The title screams soft-core porn, but Pink Innocent is, in fact, G-rated shojo comedy. The story revolves around Kotona, a ditzy rich girl who stalks and smothers Reiji, a befuddled nerd who finds Kotona almost as annoying as readers will. The jokes are profoundly unfunny: Kotona destroys Reiji’s computers, burns down his apartment, and stars in her class production of Romeo and Juliet so that she can woo him. (One shudders to think what she’ll do in future volumes: carpet bomb his home by accident? Run over his brother with a car?) Adding insult to injury is the artwork: it’s sub-par Arina Tanemura, with sparkles on top of sparkles, and a heroine so saucer-eyed she resembles a chibi squid. Unless Orange Planet was a bigger hit than I remembered, it’s hard to fathom what inspired Del Rey to license Pink Innocent; shojo fans deserve better than this dumb, repetitive stinker. 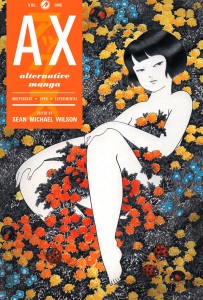 David Welsh said it best when he declared, “While AX is one of the books I’m happiest to have bought this year, it does contain some seriously bad manga.” Many of the stories in AX push the boundaries of good taste, aesthetic and otherwise, but the best of them — “Puppy Love,” “Six Paths of Wealth,” “Push-Pin Woman” — are genuinely thought-provoking. Two, however, earn demerits for their sheer pointlessness. The first, “Black Sushi Party Piece,” is a festival of excrement, anuses, and Butt Head-ugly character designs, with no real ambition other than to turn the stomach. The second, “Arizona Sizzler,” features a desert showdown between an irritated young woman and an enormous set of genitals. I have no doubt that in the hands of someone like Terry Gilliam this kind of cock-and-balls story might be funny, but the crudeness of the execution robs “Sizzler” of any potential playfulness; instead, it seems like a dumb joke dragged out to epically unfunny lengths, the manga equivalent of a Benny Hill sketch. —Reviewed at The Manga Critic, 5/21/10 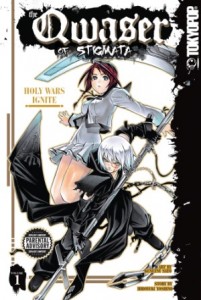 1. THE QWASER OF STIGMATA (Tokyopop)

The creators of Qwaser of Stigmata have erected a sturdy framework on which to hang boobs and bishonen: their story takes place at a parochial boarding school filled with nubile teens, allowing them to indulge every manner of fetish, from schoolgirls in short skirts to hotties of the cloth. Alas, Hiroyuki Yoshino and Kenetsu Sato’s only novel idea was to substitute Russian Orthodoxy for Catholicism, the go-to religion of manga-ka in search of cool outfits and arcane rituals. The rest of the story is a fever-dream of incoherent fight scenes, topless girls, and… breast feeding. (That’s the source of the characters’ super-strength: breast milk. I’m not making this up. Really.) The central plot, which revolves around a Russian icon, makes even less sense than the fight scenes; I’m not an expert on any form of Eastern Orthodoxy, but I don’t think it’s a stretch to say that an observant person would find it offensive. (Or silly.) The saddest part is that an imaginative artist could write a boffo manga about the Russian Orthodox Church, which has a long and rich history, filled with mystics, heretics, and believers so hard core they’d set fire to themselves before accepting small changes to the liturgy. —Reviewed at The Manga Critic, 8/11/10

So… I turn the floor over to you: what titles do you think belong in this year’s Manga Hall of Shame?