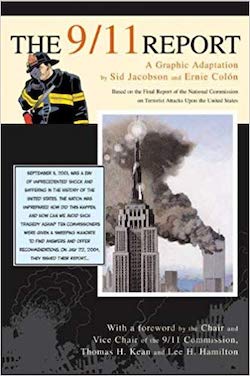 Modern governments from the Bolshevik regime to the Bush presidency have sought simple, appealing ways to present complex information to their citizens, from “Red Pinkerton” novels (think politically correct Communist detective stories) to televised public service announcements. Ernie Colon and Sid Jacobson’s The 9/11 Report: A Graphic Adaptation is one such effort, produced with the full cooperation of the National Commission on Terrorist Attacks Upon the United States. The goal: to summarize the Commission’s findings in a concise, visually arresting format that would appeal to readers reluctant to tackle the full 500-page document. Unfortunately, the final product falls well short of the mark, offering a dense, confusing gloss on the Commission’s work that I found harder to read than the actual prose report.

One can’t fault Colon and Jacobson for their fidelity to the original material. Their book follows the report closely, down to the chapters and subheadings, and uses the Commission’s own words to explain the events that precipitated the 9/11 attacks. In their efforts to mimic the structure of the original document, however, Colon and Jacobson seldom find the right balance between text and image; most of the artwork feels more like an afterthought than a clarification of the prose. More frustrating is the book’s choppy visual flow; Colon and Jacobson’s panel placement often seems poorly chosen, making it difficult to read the images and text boxes in the correct sequence. 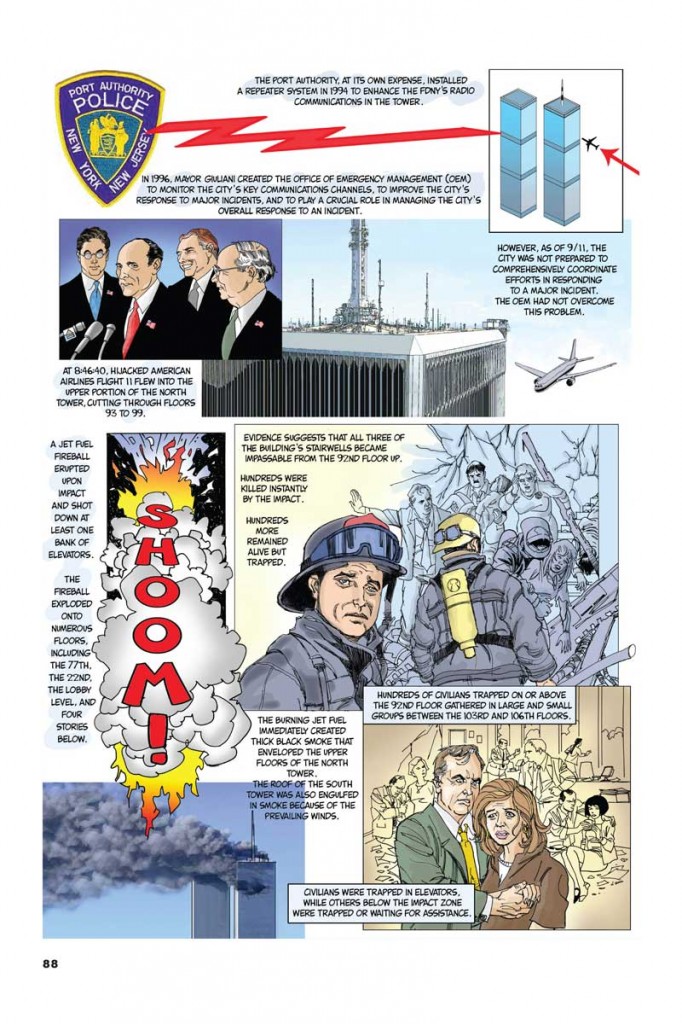 The artwork, too, is a disappointment, an eclectic assortment of traced elements, computer-generated graphics, maps, photo-realistic drawings, and Silver Age character designs that never mesh into a seamless whole. (It’s particularly odd to see some real-life figures get the cartoon treatment, while others are rendered in a naturalistic fashion; as depicted in The 9/11 Report, Condolezza Rice bears a striking resemblance to Lucy van Pelt.) Though Colon and Jacobson generally avoid visual stereotyping, there are a few unfortunate images sprinkled throughout the book. On page 115, for example, there’s a chart outlining strategies for combating Muslim extremism in the Middle East and Southeast Asia. The chart is embellished with several images of hook-nosed, squinty-eyed, turban-wearing terrorists, one of whom grins menacingly at the reader, rocket launcher perched on his shoulder; surely the problem of global terrorism deserves a more sophisticated treatment than cartoonish, racist typecasting.

The most effective section of The 9/11 Report is the very beginning, in which Colon and Jacobson meticulously recreate the morning of September 11, 2001. They present the sequence of events twice, first depicting what happened aboard the four hijacked airplanes, then reconstructing the official response to these same events, documenting the jurisdictional confusion and poor communication that prevented the government from taking more decisive action. Both passages consist of four horizontal timelines that allow the reader to see, at a glance, what was happening aboard all four planes on a minute-to-minute basis. (In the hardbound edition, these timelines are printed on a single piece of paper which readers can unfold to view the entire sequence of events.) Here, the comics medium seems uniquely suited to showing these events simultaneously, giving the reader a much better appreciation of just how quickly the day’s events unfolded, and how difficult it was for anyone — military commanders, aviation authorities, police and fire officials — to know how to proceed.

It’s a shame that the rest of The 9/11 Report doesn’t utilize the format as effectively as these early pages, where image and text function as co-equal partners. Whatever the flaws of the original report — and, depending on your political inclinations, those flaws are either minor factual errors or egregious omissions of evidence implicating the CIA in bringing down the World Trade Center — it is a more effective, compelling narrative than the one Colon and Jacobson fashioned from it.

THE 9/11 REPORT: A GRAPHIC ADAPTATION • BY SID JACOBSON AND ERNIE COLON, BASED UPON THE FINAL REPORT OF THE NATIONAL COMMISSION ON TERRORIST ATTACKS UPON THE UNITED STATES • HILL & WANG • 134 pp.