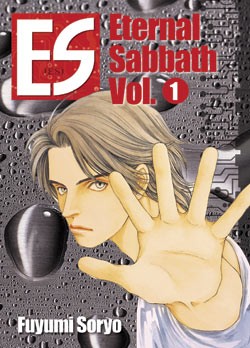 Back in June, Brigid Alverson, Robin Brenner, Martha Cornog and I gave a presentation at the American Library Association’s annual conference called “The Best Manga You’re Not Reading.” Our goal was to remind librarians that manga isn’t just for teens by highlighting fourteen titles that we thought would appeal to older patrons. Response to our presentation was terrific, so I decided to make “The Best Manga You’re Not Reading” a regular feature here at The Manga Critic. Some months I’ll shine the spotlight on something obscure or out-of-print; other months I’ll feature a title that you may have heard about (or even read) because I think it has the potential to appeal to readers who aren’t necessarily mangaphiles. This month’s title — ES: Eternal Sabbath (Del Rey) — was one of Brigid’s picks, a sci-fi manga that she felt had strong visuals and a suitably creepy atmosphere. I couldn’t agree more, so I decided to revise an old review from my PopCultureShock days to explain why you ought to read this trippy, thought-provoking story about the perils of cloning and extrasensory perception.

The vivid images that haunt us when we sleep seem like perfect fodder for art, yet we often produce dream-inspired work that’s much goofier and far less potent than our nocturnal imaginings: think of Salvador Dali’s unabashedly Freudian dream sequence in Spellbound (the one false note in an otherwise great thriller), or John Fuseli’s heavy-handed symbolism in The Nightmare (in which a Rubenesque sleeper is tormented by a ghostly horse and an incubus, the ultimate Romantic two-fer). These images fail to shock because they seem too mannered, too staid — in short, too neat, failing to capture the subconscious mind’s ability to juxtapose the banal with the fantastic. In ES: Eternal Sabbath, however, manga-ka Fuyumi Soryo (best known to American readers for the shojo drama Mars) steers clear of the cliches and overripe imagery that reduce so many dreamy works to kitsch, producing a taut, spooky thriller that reminds us just how weird and terrifying a place the mind can be.

The first volume of ES introduces us to Shuro, a young man with the ability to read thoughts. Shuro uses the information he gathers from other people to impersonate their friends and family members, wiping their memories clean when he tires of the situation. His aimless routine is upended by a chance encounter with neuroscientist Mine Kujyou, who spots Shuro sauntering past a brutal crime scene in a state of utter indifference, as if he knew what was about to transpire. Her researcher’s instinct piqued, she begins to track Shuro’s movements, initiating a game of cat-and-mouse that quickly escalates into psychological warfare.
In a plot twist that would surely please Fox Mulder, a researcher from a clandestine government laboratory arrives on the scene, Smoking Man-style, to explain that Shuro is, in fact, a clone, created by scientists on the hunt for the “eternal sabbath,” a.k.a. eternal youth, gene. (The psychic powers powers are a happy by-product of the experiment.) Shuro escaped from his creators with fellow clone Isaac, an even more powerful, less scrupulous mind reader with a destructive agenda. Mine must then decide whether to assist Shuro and Isaac’s creator in re-capturing the wayward clones, or to allow Shuro to disappear back into the shadows and resume his impostor life of borrowed memories and feigned emotions.

To be sure, many of ES: Eternal Sabbath’s themes are science fiction staples: do scientists have an ethical obligation to treat engineered life forms with the same care as humans? Are there realms of knowledge and experience that cannot be quantified or explained through modern science? That such tried-and-true questions inform but never overwhelm the narrative is testament to Soryo’s storytelling skills. She creates a small, intimately linked cast whose conflicting desires, insecurities, fears, and friendships dramatize the series’ overarching theme, what does it mean to be human?, while underscoring the poignancy of the clones’ liminal status. (Isaac, as his name suggests, was intended as a sacrifice; his creators raised him for the sole purpose of studying and dissecting him.)

If her storytelling chops are strong, Soryo’s life drawing skills are not. Her character designs have a languid quality that makes them seem oddly placid in scenes fraught with conflict. Where Soryo shines are the dream sequences, which are visceral and unsettling. Some of the symbols she employs — horses, thorns — are familiar from television and movie dreams, yet the way in which she orchestrates these dreams is not, as she captures the peculiar rhythm and logic of a nightmare. One of the most effective sequences occurs right at the beginning of the series: a large insect emerges from a disturbingly organic mass that suddenly shatters into hundreds of living, moving pieces. The strangeness of the image, the abrupt shift in mood, the blurry line between inanimate and animate objects — these feel like an authentic product of the subconscious, and not a Freudian rebus to be decoded by the audience.

I could cavil about a few details (the translation is rather flat, as are Soryo’s pre-fab backgrounds), but on the whole, this eight-volume series has few wasted pages. The story moves at a brisk clip without sacrificing characterization or common sense; the art suggests the workings of the subconscious mind without silliness; and the ending is genuinely moving and surprising. Science fiction fanatics will find much to like here, as will horror buffs and readers who like the idea that women can kick butt in the sciences, Lawrence Summers and evil clones be damned.

This is an updated version of a review that appeared at PopCultureShock on 6/22/2008. The Best Manga You’re Not Reading is an occasional feature that highlights titles that aren’t getting the critical attention — or readership — they deserve. Click here for the inaugural column; click here for the series archive.