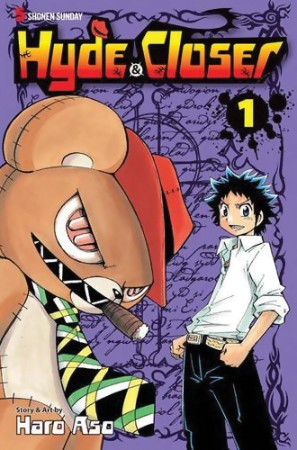 Move over, Chucky — there’s a new doll in town. His name is Hyde, and he’s a stuffed bear who wears a fedora, chomps cigars, and wields a chainsaw. (More on that in a minute.) Hyde belongs to thirteen-year-old Shunpei Closer, a timid junior high school student whose biggest talent is avoiding conflict. Watching Shunpei dodge bullies at school, it’s difficult to believe that he is, in fact, the grandson of Alysd Closer, a powerful, globe-trotting sorcerer with enemies on every continent. Keenly aware that his rivals might seek revenge against his family, Alysd created Hyde, a plush fighting machine capable of fending off attacks with a magical chainsaw. Hyde remained dormant for almost six years before the delivery of a mysterious package containing a murderous, knife-throwing sock monkey activated his abilities. (I can’t believe I just typed the phrase, “knife-throwing sock money,” but there it is.) Thus begins a kind of magical tournament manga that pits Hyde and Shunpei against an array of powerful sorcerers and their toy henchmen.

You don’t have to be a ten-year-old boy to find the sight of karate-chopping, knife-throwing dolls amusing, though it certainly helps. There’s a gleeful, go-for-broke quality to the fight scenes that evokes the feeling of real childhood play, a sensation akin to chopping off your Barbie’s hair or staging an epic battle between your sister’s My Little Ponies and your Star Wars action figures. Making these scenes even more enjoyable is Hyde, who sounds like an affectionate parody of James Cagney, punctuating the combat with sharp, funny one-liners that wouldn’t be out of place in The Public Enemy.

Yet for all the energy and goodwill engendered by these scenes, Hyde & Closer tends to bog down in exposition masquerading as dialogue, thanks to its rather complicated mythology. The rules of engagement are different for each opponent, which means that Hyde spends part of every fight outlining his strategy for defeating the villain du jour. Hyde isn’t the only character who sounds, at time, more like an omniscient narrator than a participant in the action; the villainous sock monkey, for example, lectures Shunpei at great length about Alysd’s true identity, scoffing at Shunpei for thinking gramps was an archaeologist. “That’s his cover story,” the monkey explains. “I guess no one told you anything.” (Or, more accurately, “I guess that’s my opening to disabuse you of that silly notion!”)

The battle scenes are further encumbered by Shunpei’s self-flagellating outbursts, usually along the lines of “I’m pathetic!” or “It’s all my fault!” Each time Shunpei doubts himself, the action comes to a screeching halt until he can muster the courage to stop whimpering and start fighting. Shunpei is clearly meant to be the kind of average-joe character that readers can identify with, but it’s hard to imagine anyone over the age of ten or eleven finding him sympathetic; after all, his bodyguard is quite handy with a chainsaw. Call me crazy, but I’d find that rather empowering.

If the script is a little creaky, Haro Aso’s artwork is bold, stylish, and suitably sinister. Hyde, by far, is his best creation, with his enormous button eyes, rakishly tilted hat, and jagged seams; he’s the perfect mixture of beloved stuffed animal and thirties gangster, easily transforming from a benign, wide-eyed toy to a glowering menace. (In a nice touch, the stitches on Hyde’s mouth are stretched to their limit whenever he’s spitting dialogue or downing one of his signature drinks: honey on the rocks.) The villains, too, are imaginatively rendered, from the jack-in-the-box with shark-like teeth to the kokeshi with lethal, snaking hair. (Hommage to Junji Ito, perhaps?) The only downside to Aso’s art is his penchant for extreme camera angles. He draws his fight scenes from so many different perspectives — from the floor up, the ceiling down, or directly behind Hyde’s head — that it’s hard to track the characters’ movement through the picture plane; characters have a tendency to pop up in unexpected (and sometimes illogical) places.

Still, it’s hard to deny the appeal of stuffed animal cage matches or teddy bears who swagger like James Cagney, and for those two reasons, I’m going to stick with Hyde & Closer to see where Aso goes with his Fight Club-meets-Winnie the Pooh premise.